Surprise surprise the Brazilian Grand Prix yet again hasn’t disappointed the viewers, we were treated to an absolutely stunning race weekend including all sorts of drama on and off the track. The 2021 Brazilian GP was, fortunately, one of the three tracks this year to have the sprint race trialled in order to see if the new system will be used next year.

Qualifying was superb with Lewis Hamilton dominating the scene and leaving fellow competitors, Red Bull, in the dust. Unfortunately for him he was later on disqualified and was forced to start at the back of the grid for the sprint as well as Championship rival, Max Verstappen, also had trouble with the stewards resulting him in getting a 50,000 Euro fine.

The sprint race went perfectly for Hamilton as he made his way from 20th to 5th in the space of 24 laps! An absolutely stunning drive from the Brit, we also saw Bottas keep hold of Max Verstappen and end up taking ‘pole position’ and starting 1st for the race on Sunday.

Lewis Hamilton had a perfect weekend. His dramas first started in qualifying as he was disqualified due to an illegal rear-wing issue and then had a beautiful sprint race with making up a superb 15 positions and laying himself 10th for the race.

Then came race day where he absolutely stormed the field, with the help of a safety car managing to get himself to P3 just after lap 6 and then for the remainder of the race he then was constantly charging down the two Red Bulls.

Hamilton eventually passed Perez fairly easily and then had his championship rival to deal with. Seeing as how Red Bull had made a questionable call on the strategy he was able to be on Verstappen’s tail very soon and be on 3 laps of fresher tyres making his life a lot easier. He pursued Max lap after lap and after their close encounter, Hamilton eventually got the move to stick and then came home to win the race 10 seconds ahead of him.

It was a superb weekend for Lewis Hamilton and he really showed that he is fighting to the very last minute for this championship and looks to be that it will come down to the last race.

Seeing as how McLaren had now dropped down in the Constructors to 4th place you would assume that they really would’ve tried this weekend seeing as they wanted to get one back over Ferrari.

The very beginning was the most crucial point, Lando Norris had a great launch of the line and tried to go round the outside of Carlos Sainz however Sainz turned into Lando unfortunately causing him to have a puncture and drop down to stone-cold last.

Fortunately, Lando’s hope was saved with a Safety Car that allowed him to catch back up to the field but was only able to fight back for 1 singular point, finishing P10. This didn’t get better either with Daniel Ricciardo who was running in 9th position sadly had to retire from the race with severe engine issues.

This allowed Ferrari to essentially run their own race in which they ended up finishing 5th and 6th scoring a total of 18 points and even more crucially, outscoring their rivals yet again and this time by 17 points. Ferrari now leads the Constructor battle for P3 by 31.5 points and hope to secure that spot in the next coming races.

As much as how close the front runners battle is, it’s even closer towards the midfield of the grid! So far this season we have had the Mercedes against Red Bull and the McLaren’s against Ferrari but the battle for 5th in the constructors is very unnoticed.

Throughout the entire season Alpine and AlphaTauri have been going wheel to wheel all season and have always been incredibly close in the constructors, but due to today’s result, they are both now level on points both scoring 112. Going into the last 3 races of the season now it should be interesting to see how they battle it out and see who comes out on top.

In the race today both teams scored a total of 6 points, with Pierre Gasly finishing in P7 scoring 6 and Alonso and Ocon finishing in 8th and 9th. Unfortunately, AlphaTauri didn’t have Yuki Tsunoda up there today and he struggled massively with finishing in P15 with a 10 second time penalty due to causing a collision with Aston Martin driver, Lance Stroll.

Throughout the race, we saw Gasly pull off some amazing overtakes against the Alpine drivers but more specifically against fellow Frenchman, Esteban Ocon.

The last 3 races will be a rocky ride for teams that are battling for the constructors, there are fewer and fewer points every week up for grabs to try and push themselves ahead of their competitors, even though it may be stressful for the teams it is massively enjoyable for the fans to watch, hopefully, next week in Qatar we are given a race week like Brazil. 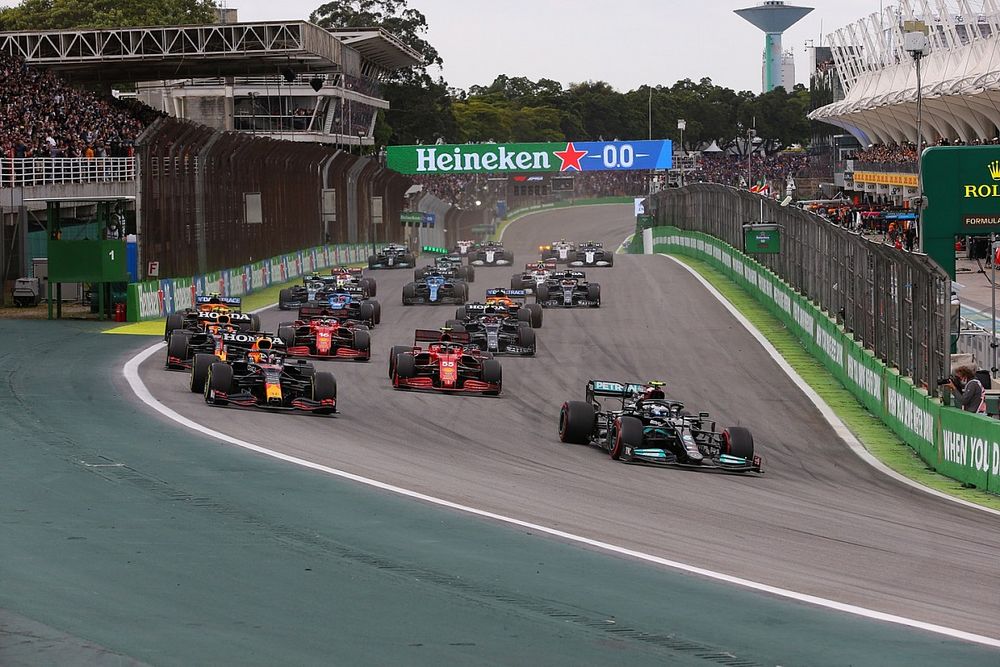