Even a year ago, saying that the Broncos should put their veteran quarterback on the bench would probably be seen as an act of heresy. The year before that, when Manning threw a record-breaking 55 touchdowns, daring to think they should sit him (even when he was just chasing records by the end of the season) would get you chased out of whatever sports bar you might have been in at the time. This year though, it seems to be a different story altogether, at least if you look at the numbers.

The numbers are a good starting point to see Manning’s performance, from his record breaking year in 2013, to his current performance. He threw 55 touchdowns in 2013, 39 last year, and through to his most recent game this year, 6. Sure, we aren’t even halfway through the season yet, so trying to extrapolate much of anything from his numbers is liable to still be a bit of a reach, but the decline is there. Some of that will just come from the passage of time; Manning is 39, he isn’t a young man anymore, and looking at the current makeup of quarterbacks in the NFL – think Aaron Rodgers, Russell Wilson, and, when he’s good, Colin Kapernick – Manning seems representative of the old guard of the league in every possible way. So, of course old age is a factor in Manning’s performance; look at the number of long passes he’s thrown: 13 for 40+ yards in 2013, 11 last year, and 5 this year. As he gets older, his form will be affected physically.

But it isn’t just a physical decline that seems to be impacting the way he’s been playing; his decision making has plummeted this year; his interceptions against Cleveland were the product of his decisions as much as they were Cleveland’s defence. He’s already thrown ten interceptions this year, as many as he threw throughout all of the 2013 season. Every week, it seems that the Broncos defence manages to win a game in spite of Peyton Manning, winning half of their games by a touchdown or less, and the Broncos offence went over 20 drives without scoring a touchdown.

So, the question is, why not bench Peyton Manning?

Well, first things first, their second string quarterback is Brock Osweiler, and no, I haven’t heard of him either. Looking at his stats, he’s literally thrown 30 passes for the Broncos in the space of three seasons. And it’s not like the Broncos will be able to rely on their running game with Peyton either continuing to play in his current form, or with him on the bench; their backfield is averaging 85 yards a game, 30th in the league. I mean, the Broncos defence might be good, but they’re not quite superhuman.

And of course, there’s always the problem of if a move as brazen as benching a veteran, record-breaking, Super Bowl winning quarterback doesn’t work. Bold coaching choices and play calls live and die not on how bold or effective they might be, but if they actually work. Sean Payton’s onside kick in the Super Bowl is revered because it works; Pete Carroll’s own – infamous – Super Bowl play calling (for the record, I think he made the right call) is only seen as infamous because it failed. Even looking back a few weeks ago, the Steelers walk-off touchdown against the Cardinals is a brave play call because it worked (for the record, I think it was the wrong call); if it didn’t, it would be seen as misguided.

All of this seems to make the case that Manning shouldn’t be put on the bench; the offence is one-dimensional, and their backup isn’t exactly a proven commodity, but the Broncos coaching staff seriously need to consider just how much they’ll be able to get out of Peyton Manning this year. I mean, you could always hope that, since this is Peyton Manning we’re talking about, his performance could get better. Or it could get worse. The real issue seems like it has nothing to do with Manning at all, but instead it has everything to do with whether or not Gary Kubiak wants to forever be known as the guy that put Peyton Manning on the bench. 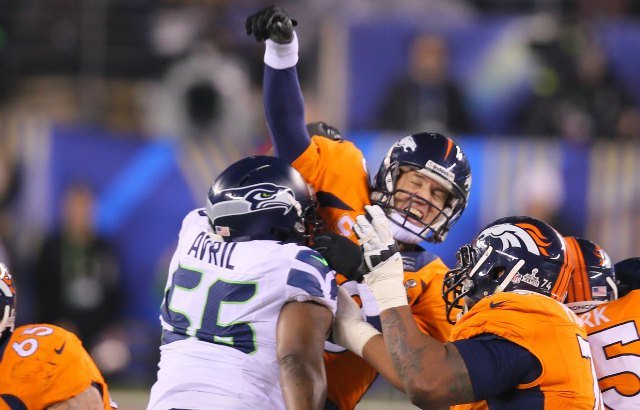