When do you give up on a 1st round talent? Is a guy a 1st rounder just because he plays a premium position? Everyone knows that the draft is like throwing a bunch of darts and hoping one lands, but a 1st rounder is supposed to be a blue chip player. A 1st round quarterback is your franchise changing piece, but what happens when you draft that quarterback and then blow up the whole operation a year later?

Let’s take a look at two different Teams, the choices they made and the impact it could take on the rest of the league. Going back in time to the 2018 NFL Draft, the Arizona Cardinals select Josh Rosen Quarterback UCLA. At the time the pick deemed to be a steal in the draft. I remember watching and being excited to see Baker Mayfield lead the Cleveland Browns to the promised land, I remember thinking “”Wow Josh Allen and Sam Darnold are really gonna battle it out in the AFC East for years to come”. Then I remember seeing Rosen get picked and think “Great Value pick by Arizona”. Rosen famously said after the draft “Nine mistakes were made ahead of me tonight, and I’ll make sure that over the next decade or so that they will know that they made a mistake.”  All Arizona could see in the future was hope, but Rosen went on to start 13 games that season for Arizona, going 3-10 with 2,278 passing yards, 11 touchdowns and 14 interceptions. I preach day in and day out and I’ll probably die with a sign in my hand that reads “A 1st round quarterback deserves three years before you move on”, but looking back the cardinals saw all they needed to see and made a choice of trading Rosen for a second and fifth round pick to the Miami Dolphins. The Cardinals then went on to draft Kyler Murray out of Oklahoma first overall in the 2019 NFL draft, and Rosen was named the backup to Journeyman Ryan Fitzpatrick to start the season for the Dolphins. Again looking back I thought “Wow great move by the Dolphins, Rosen will be able to compete and be groomed in a new system with a fresh start.”  Rosen in week three was named the starter of the Dolphins but to much disappointment only started 3 games the rest of the year being benched after week six and stowed away. Rosen went 0-3 for the Dolphins in the 2019 season and it seemed he never really got any better from his time as a Cardinal.

Looking back at the Cardinals, did they have a choice? Their new young Head Coach Kliff Kingsbury, had been recruiting a quarterback since he was in the 8th grade and he just so happened to be entering the draft at the time and the Cardinals just so happened to have the number one overall pick. As an organization you want to pair your new Head Coach with his guy. Kingsbury had no ties to Rosen, the Cardinals wouldn’t have been in that situation if Rosen had won more than three games in the 2018 season. Kyler Murray and Kingsbury went on to show the League that they can be a capable tandem for years to come, winning 5 of 16 games with Murray starting all 16 games. The future is bright for the Cardinals and they made the right choice they should have no regrets moving forward they found their face of the Franchise.

Did the Dolphins get fleeced in the trade for Rosen? No I don’t think so, did Rosen light the world on fire? Not even a little, the kid only played three games for the Dolphins, but looking forward here’s what I see happening: Everyone assumes the Dolphins are gonna grab a quarterback with the number 5 overall pick come April, but what happens if they take another position and miss out on Tua Tagovailoa? Do they take Justin Herbert if he’s still on the board or what about Jordan Love, a young man earning high praise out of Mobile Alabama? I personally think the quarterback of the future is still on their team with Josh Rosen. Let the Kid play next year if he bombs so what? Guess who’s eligible to be drafted in 2020, a well known college quarterback named Trevor Lawrence. Let Rosen go out there play his game, let him prove that on draft night there were nine mistakes drafted before him. Let him prove everyone wrong. Let Josh Rosen be the face of your Franchise. 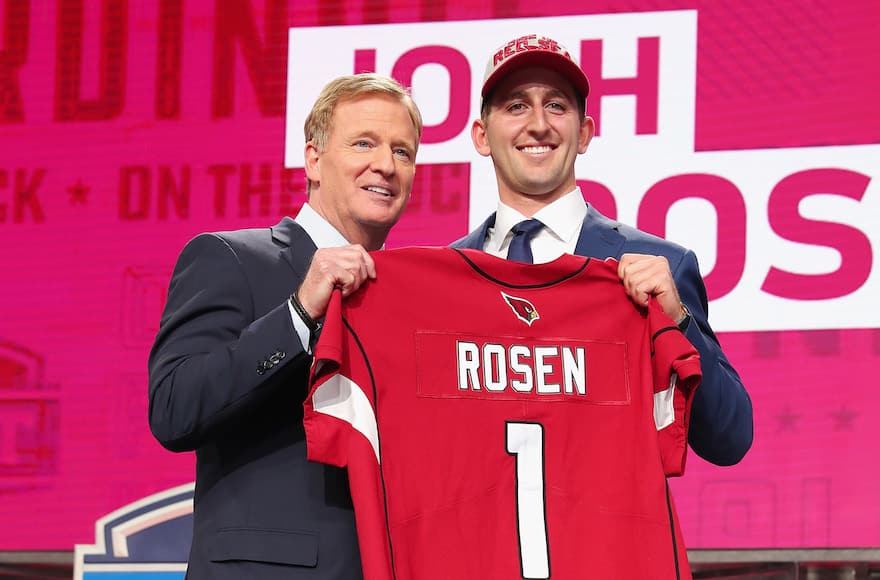