A Tour de France stage has now finished in Chateauroux on four occasions, of which Mark Cavendish has won three (stage five in 2008, stage seven in 2011 and stage six in 2021). That first stage victory in 2008 was also Cavendish’s very first stage win at the Tour; his stage win in 2011 was the 17th of his career at the Tour, while his victory on this stage is his 32nd.

Chateauroux has only seen two nationalities win in the town – Italian (Mario Cipollini in 1998) and British (Cavendish).

Quick-Step has now won 50% of Tour de France stages in 2021 – the last time the Belgian-registered team did not win a stage at the Tour de France was in 2012.

At 160 kilometres long, today’s stage from Tours is the shortest of four stages to finish in Chateauroux – the previous three stages were all at least 218 kilometres long.

Only Thomas Voeckler on a Continental/ProTeam (Europcar in 2011) has worn the yellow jersey longer (10 days) than Mathieu van der Poel.

Today’s stage covered almost 250 kilometres – this is the longest distance since stage 20 of the 2000 edition, which was 254.5 kilometres long – won by German sprinter Erik Zabel.

Matej Mohoric won his first stage at the Tour de France, and became the third different Slovenian to win a stage at the Tour – Slovenia now counts 8 stage victories at the Tour, one behind Uzbekistan (9). No other nation has won as many stages in the Tour as Slovenia in the last two editions (6).

Mohoric became the 103rd rider to win at least one stage in all three Grand Tours, and the second Slovenian (Roglic – 11, three in the Giro, three in the Tour and five in the Vuelta) to do so.

No country has had more riders on the podium (top three stage finish) since the start of the Tour de France than Belgium and Slovenia (5).

Vincenzo Nibali finished 13th today, his highest finish in a Tour de France stage since winning stage 20 of the 2019 Tour; the winner of the 2014 edition moves up from 19th place to 6th in the general classification – the last time he was in a higher position in the hunt for the yellow jersey was in the 2018 Tour after stage 11 (4th place).

This is the sixth time that a stage of the Tour de France ends at Le Grand-Bornand, the previous one was in 2018. All of those stages have been won by different nationalities: Lance Armstrong (USA), Linus Gerdeman (GER), Frank Schleck (LUX), Rui Costa (POR), Julian Alaphilippe (FRA) and Dylan Teuns (BEL).

After winning stage six of the 2019 edition, Teuns won his second stage at the Tour de France – his second in two Tour participations.

In the last three Tour de France editions, no country has won more stages than Belgium (7 – three in 2019, two in 2020 and two this edition). The first and last of those seven stages were won by Teuns.

Bahrain Victorius has won two stages back-to-back – previous to this Tour (Quick-Sep), the last time one team had two winners in two consecutive stages was in  2019 – Julian Alaphilippe stage 3 and Elia Viviani stage 4 (Quick-Step). Team Bahrain’s previous stage winner (prior to this Tour) was Vincenzo Nibali in 2019 (stage 20).

Tadej Pogacar will wear the yellow jersey for only the second time in his Tour de France career after winning stage 20 last year and gaining enough time over his rivals in today’s stage; the 22-year-old Slovenian has never won the yellow jersey this early in the Tour.

Pogacar leads the GC by 1:48 – he has never had a time gap as large as that – winning last year’s Tour by 59 seconds.

Ben O’Connor won his second Grand Tour stage, the first one in Tour de France after winning the 17th stage at the 2020 Giro d’Italia.

O’Connor is the 12th AG2R rider to win a stage at the Tour de France. This team has won two stages in the last two editions after winning none in the previous two (2018 & 2019). Also, a French team (AG2R) won their first stage of this Tour de France – AG2R won their 20th Tour de France stage, and O’Connor follows up Nans Peters’ stage 8 win in last year’s Tour. The team failed to win a stage in the 2018 edition, but they did take home the white jersey with Pierre Latour.

Nairo Quintana is the first Colombian rider to lead the mountains classification competition (polka dot jersey) in the Tour de France since himself in 2013 – the year when he finished first in this category.

Although this stage finished at 2,107 meters above sea level, it is only the third highest point that the peloton will pass this at Tour, after Port d’Envalira (2,408 metres on stage 15) and Col du Portet (2,215 metres on stage 17).

This was the fourth time that a Tour de France stage finished in Valence – previously in 1996, 2015 and 2018. Each of those stages appeared in the second week of the Tour de France, and were won by different nationalities (Colombia, Germany and Slovakia, respectively); Mark Cavendish is the first Brit to win in Valence.

Mark Cavendish is the only rider to have won three stages at this year’s Tour de France – the seven other stages have all been won by seven different riders; the last time he won more than three stages was in 2016 (4). Another stage win for the Brit would equal Eddy Merckx’s record of 34 stage wins at the Tour de France.

Cavendish is the first rider since Pogacar in last year’s Tour to win three stages in one edition – he also became the first cyclist able to win three Tour de France stages at the age of 36.

Cavendish is now the only rider in Tour de France history to have won at least three stages across seven different editions.

Deceuninck Quick-Step has won four of the 10 stages in this year’s Tour de France. The last time the team won more than four stages in the Tour was in 2017 (5 – all won by Marcel Kittel).

The Belgian champion, Wout van Aert was beaten in a sprint, and thus finished in second place for the first time since stage five of the 2019 Tour.

Jasper Philipsen’s third place today is the fourth time that he has finished in the top three of a stage – no other rider in the peloton has been as consistent. 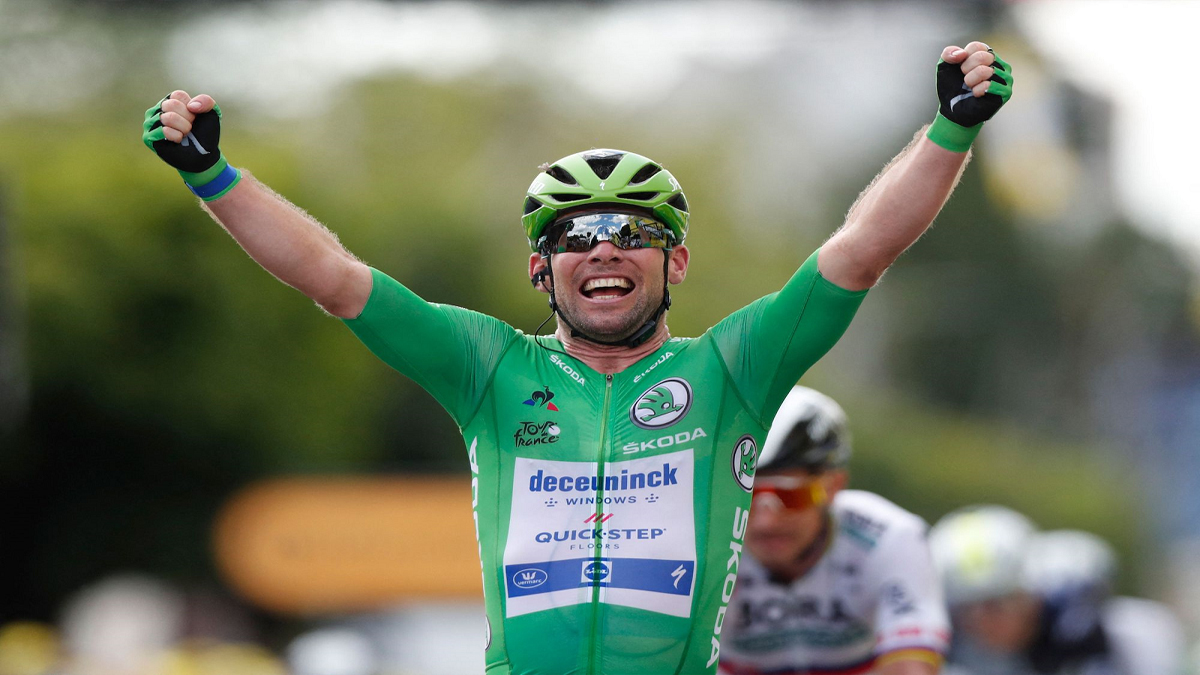