It was another Tuesday evening of UEFA Champions League football and it saw Matchday Five of Groups A, B, C & D take place and included matches for Liverpool and Manchester City, as well as Real Madrid, Bayern Munch and Athletic Madrid too amongst others, shall we see what happened?

Atletico knew a win this evening would see them qualify for the knockout stages ahead of their final game in Austria against Salzburg, and against a Bayern team who had already gone through as group winners and had made ten changes to their team, the hosts felt this was a great chance to grab that win.

It looked for so long as if they would get that win too after Sequeira’s 26th-minute goal had put them ahead, but with less than five minutes remaining Muller converted a spot-kick and it means the Spaniard’s now have a showdown against the Austrian’s next week after Salzburg picked up a 3-1 win in Moscow thanks to a brace from Berisha and one from Adeyemi.  Atletico only needs to avoid defeat in that final game to qualify, but it will not be easy against RB Salzburg in Austria.

This has got to be one of the tightest groups around right now, if not the tightest ever known!!!  Only three points separate Inter Milan in fourth and bottom and top side Borussia Monchengladbach, this after Inter won in Germany to inflict the host’s first loss of the campaign.  Lukaku netted another two goals and were cruising to the win they needed to stay in the qualification hunt, but the visitors thought they had got it back to 3-3 when Plea completed his hat-trick, only to see VAR rule it out for offside, and hand Inter a lifeline.

And Shakhtar completed the double over Real after a 2-0 win in Ukraine this evening, a result which leaves the Spaniards outside the top two of the group with a game to play. Inter host Shakhtar in the final group game whilst Real hosts leaders Borussia with all four teams in with a chance of securing a passage into the knockout stages, will be some final day in this group next Wednesday.

Manchester City knew a point in Porto would be enough for them to go through as group winners, they had already confirmed their passage into the knockout stages before the game but finishing top is important.  Porto knew a point would secure their passage into the Last 16 as well so the final outcome, a goalless draw, suited both, although Gabriel Jesus thought he had netted a winner ten minutes from time, only to see VAR rule it out for offside, in the end, it mattered not.

This meant the game on the south coast of France was meaningless, and although the Greeks took the lead, two goals from ex-West Ham favourite Dimitri Payet, both penalties, saw Marseille net their first points and first goals of the campaign although them and Olympiakos will finish way behind the top two.  The final round of games next week sees City host Marseille and Olympiakos host, Porto, with nothing riding on any game.

Liverpool knew a point would be enough to secure their passage into the Last 16 and after last week’s disappointing home loss to Atalanta, they knew they had to make amends for that against Ajax at Anfield.  The Reds received more bad news before the game when they suffered another injury as keeper Alisson had to pull out with a hamstring issue, meaning 22-year-old Irishman Caoimhin Kelleher came in to replace him for his full debut.

And he duly put in a man of the match performance to help see his side to the win after Curtis Jones had netted the only goal just before the hour mark after Ajax keeper Andre Onana’s error allowed Jones to sneak in at the back post to divert home.

This proved enough for Liverpool to win the group too after Atalanta were surprisingly held at home by previous pointless Danes FC Midtjylland in Italy, and the hosts only managed to rescue a point with eleven minutes remaining too, meaning they now have a qualification showdown in Amsterdam against Ajax next Wednesday evening.  The Italians only need to avoid defeat in that one but Ajax, who probably should of got something from their game this evening, will be tough opponents.

That is all for the Champions League this evening, the remaining group’s Matchday Five take place tomorrow evening (Wednesday 2nd December) with the likes of Chelsea, Dortmund, Barca, Juve, Leipzig, Man Utd and PSG all in action. 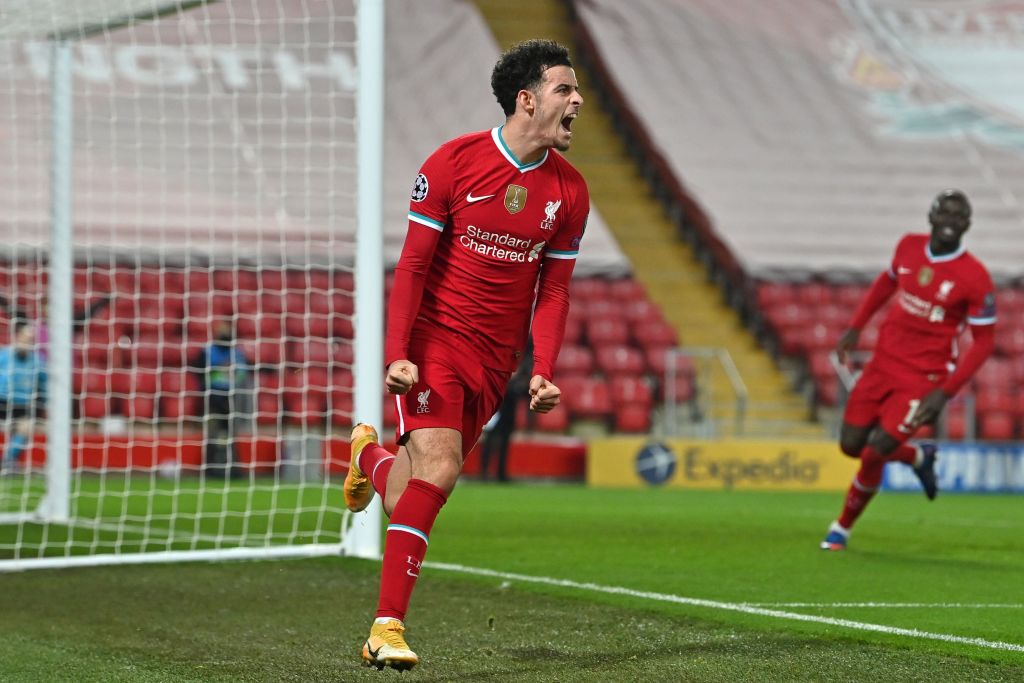