Light Heavyweight champion Jan Blachowicz successfully defended his title by defeating UFC Middleweight champion Israel Adesanya via unanimous decision (49-46, 49-45×2). It was the first title defence for the Polish powerhouse after beating Dominick Reyes for the vacant belt last September. Adesanya moved up to Light Heavyweight for the first time and was hoping to become just the fifth fighter in UFC history to become a simultaneous two division champion, but fell short and suffered his first professional MMA loss in the process.

The first round of the fight was fought for the entirety on the feet, something which was thought to have favoured Adesanya heading into the contest. Blachowicz threw multiple leg kicks to the lead leg of his opponent early on, whilst Adesanya worked the jab well but was cautious to use combinations to avoid the power that the 38 year old champion possesses on the counter. Blachowicz was excellent at checking leg kicks that came his way, and replied with kicks to the mid section to show he is comfortable to trade standing up. The Pole looked to have edged what was a closely contested first round.

Blachowicz continued to check and read the kicks of Adesanya in round two, where both men exchanged clean hooks to the head within the opening minute. After missing a left hook shot, Adesanya was caught when Blachowicz decided to clinch and use his grappling in the centre of the octagon, but the Nigerian native successfully scrambled away. Adesanya was sticking to his single punch and kick game plan but was not doing much damage to the man who weighed in significantly more prior to the fight. It was a better round from the challenger, in what was an understandably cautious first 10 minutes of action.

At the beginning of round three, Blachowicz executed a one-two punch combination that resulted in him shooting for a takedown. Adesanya, who has a terrific takedown defence percentage, stuffed it but was back in the clinch against his opponent looking to take his back. The Middleweight champion climbed away, although was met with a knee to the head in the process. Just seconds later, Adesanya replied with a hard left hook to the head that stunned Blachowicz momentarily, and started to release punishment with shots slipping through the guard. The Pole recovered, and began to clinch up against the fence again to buy some time and ware down Adesanya to avoid an attacking flurry like that again. It was another close round that could have gone either way heading into the championship rounds.

Blachowicz caught Adesanya in the clinch again in the fourth round, up against the fence before breaking it up and throwing a big right hand to the jaw of Adesanya. Another big right jab thereafter caught the challenger for a split second, leading to a huge double leg takedown that led to his first of the night for Blachowicz. With three minutes still on the clock for the round, Blachowicz passed into full mount and used his superior size to hold Adesanya down and limit his movement. He held this position for the majority of the time remaining, and attempted elbows and punches on his opponent in what was a huge round for Blachowicz.

In the final round, Adesanya landed a clean spinning kick to the body of Blachowicz who looked exhausted from the pressure he put on in the previous round. However, with Adesanya still looking for an opening on the feet, Blachowicz landed another double leg takedown in the centre of the octagon. Adesanya did his best to escape from ground position, knowing he was in trouble at this point, but his opponent was able to maintain him and work the ground and pound efficiently up until the final horn sound where Blachowicz fairly won over the course of the 25 minutes.

Blachowicz confirmed after the bout that he would like to fight Brazilian Glover Teixeira next who is now the number one contender in the Light Heavyweight division. For Adesanya, he announced he would go back down to Middleweight next to defend his current title, and was optimistic about returning to compete in the 205 pound division in the future. 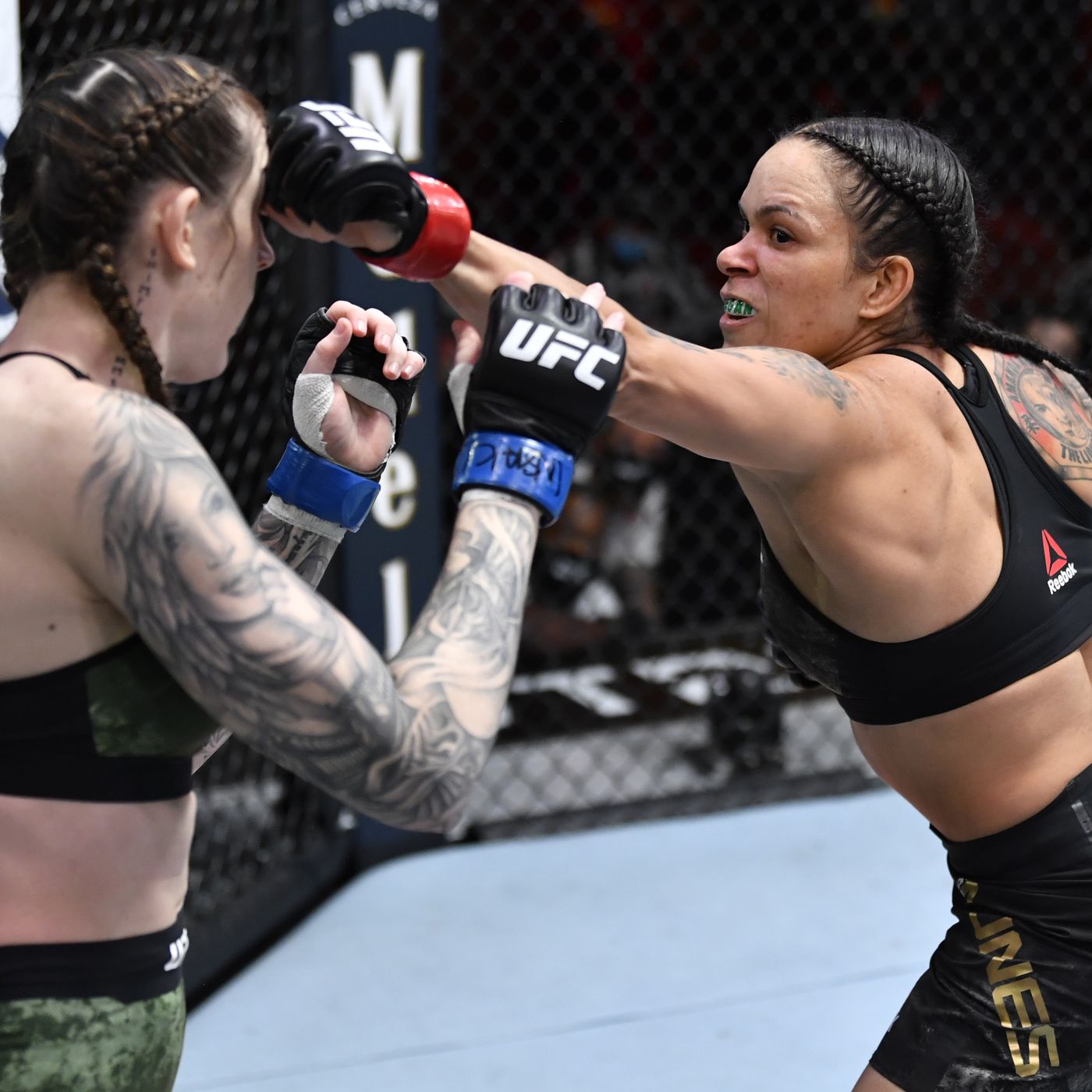 In the co-main event, Amanda Nunes beat Megan Anderson via submission just two minutes into the first round to defend her Featherweight title. Nunes also holds the women’s Bantamweight title, and was the huge favourite going into the fight as she proved once again that she is the greatest women’s combat sports fighter of all time.

The first minute of the bout showed Nunes using faints and making Anderson flinch to get her on the back foot and worried about the explosive power the Brazilian has. Eventually, Nunes threw a right hand that cracked Anderson, as well as two powerful legs kicks resulting in more punches to the head. Anderson dove for the legs knowing she was in trouble, leading to the fight going to the ground where Nunes is a black belt in jiu-jitsu. Within moments, Nunes took her back and set up a triangle armbar that was locked in tight, making Anderson tap almost immediately.

It was another incredibly dominant performance from the double champion, who has cleaned out the entire Featherweight division and alluded to fighting at Bantamweight for her next contest in her post fight interview. 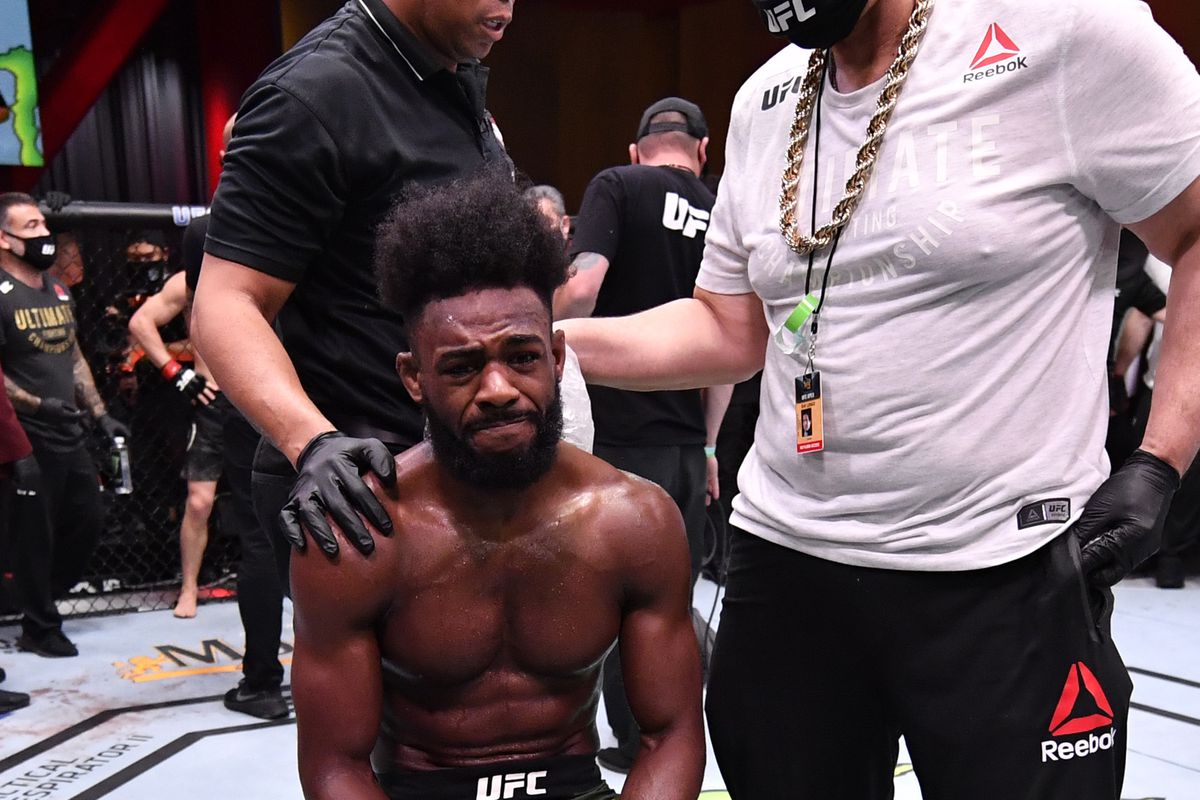 In the third and final title fight of the evening, an anti-climatic ending saw Aljamain Sterling defeat Petr Yan via disqualification in the fourth round to become the new UFC Bantamweight champion. It was a hugely disappointing finale to what was an entertaining contest up until the stoppage.

Sterling seemingly won the first round, where his high pressure was causing the champion problems with his powerful leg kicks and a flying knee that slipped through the guard of Yan.

However, this caused Sterling to lose a lot of his gas tank early on, where from round two the Russian took over and dropped Sterling with a left hook to the head. Yan dropped him again with a kick to the leg, and even took the Jamaican native down when it was suggested Sterling would win these exchanges with his deeper background in wrestling.

Sterling was attempting to continue with the high pressure style in the third, but his shots were being defended well by Yan with his high guard and counter strikes that were becoming more effective as the bout went on. Yan was able to catch a leg kick from Sterling, resulting in a trip and another takedown as the champion looked in control but still had to be wary of the danger the challenger is capable of bringing.

Yan further increased the intensity in the fourth, executing some strong one-two punch combinations and looked to finish the fight. Unfortunately, it was at this point when Sterling had his knee down on the canvas getting his head pressed by Yan, when the champion flew a knee straight into the head of his opponent, therefore calling an initial halt to the fight due to an illegal move. Referee Mark Smith gave Sterling every chance to recover so that the bout could continue, but it was obvious that he was concussed and the fight could not continue, leading to a victory for Sterling.

Yan apologised after the contest for his actions, whilst Sterling was upset that he could not win the belt the way he wanted to. UFC president Dana White confirmed that a rematch will be made immediately once Sterling has fully recovered. 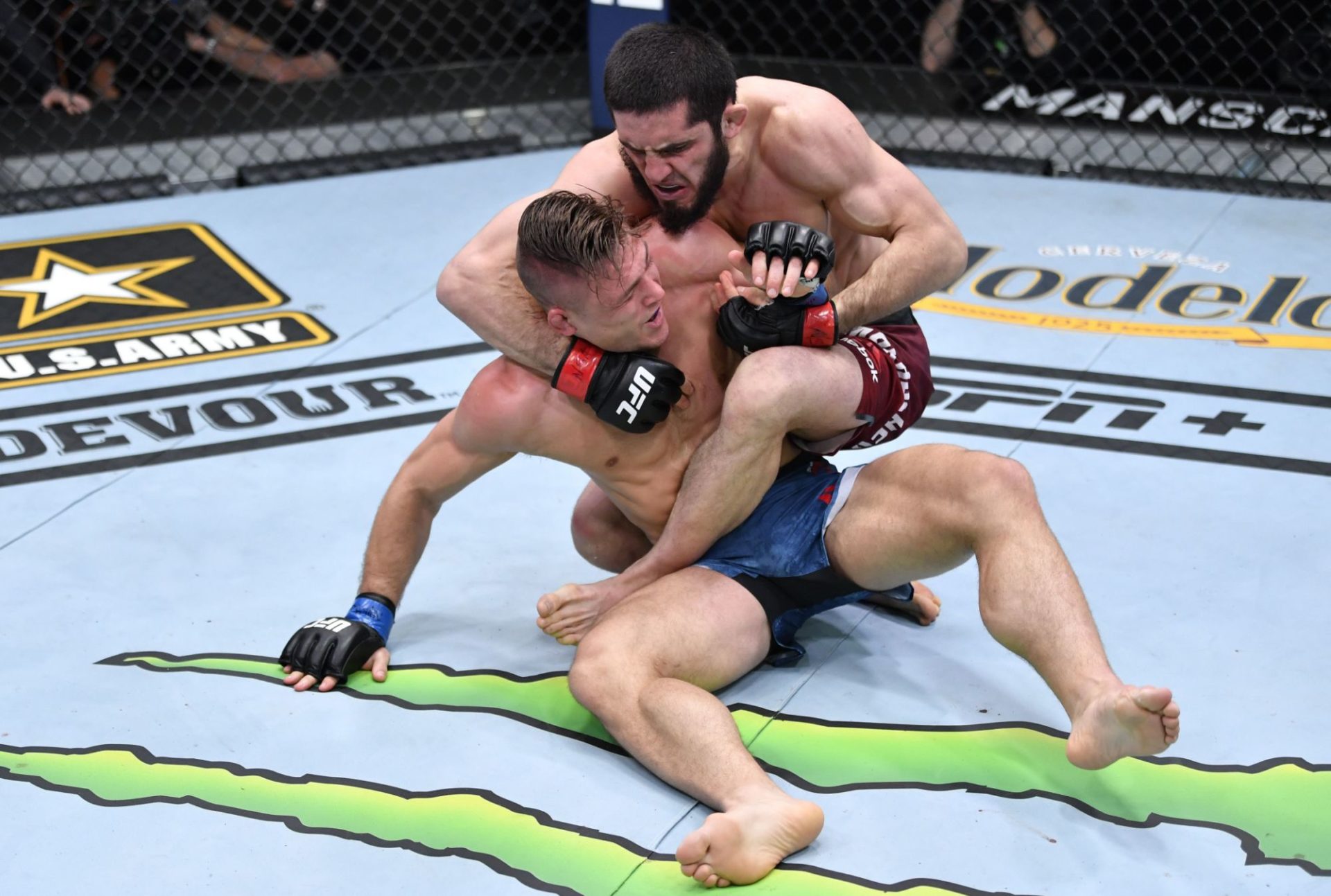 On the rest of the main card, Islam Makhachev defeated Drew Dober via submission in the third round in the Russian’s first fight since 2019. It was a dominant performance from the 29 year old, who had current men’s pound for pound number one Khabib Nurmagomedov in his corner.

Makhachev was able to utilise his Dagestani wrestling skillset in each round of the fight and avoid the power that Dober can bring to a contest. He executed a trip in the third round with Dober desperate to get back to his feet, leading to the opportunity for an arm triangle choke that Dober tapped out to.

Makhachev is tipped to be a serious contender in the Lightweight division for years to come, and called out Tony Ferguson after the fight.

The first bout on the main event saw Aleksandar Rakic beat Thiago Santos via unanimous decision (29-28×2, 30-27) in a battle of two of the very best in the Light Heavyweight division.

Both fighters are attributed to their powerful punching power and vicious knockouts over the years, but the fight was played very carefully by the pair to avoid a knockout defeat themselves. Rakic was able to do damage to the upper leg of Santos, an area where the Brazilian has had multiple surgeries over the years and a potential problem that was attacked by Rakic. However, it was largely a lackluster affair and perhaps the most disappointing contest on the evening. 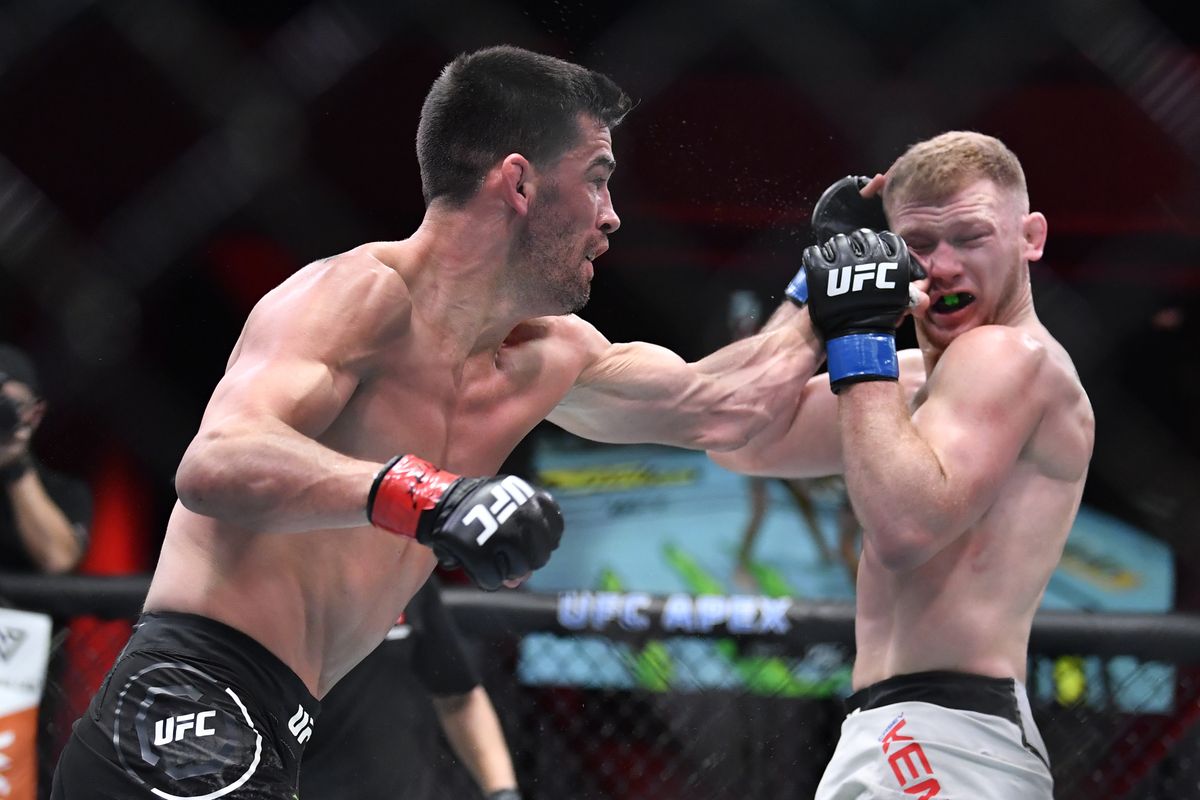 Cruz has been in and out of the sport in recent years due to injury, and after a title loss to Henry Cejudo last year, got back to winning ways over fellow countryman Kenney. Cruz used his unusual boxing style to good effect over the course of the 15 minutes, bouncing in and out of range and securing a crucial takedown in the final minutes to edge the victory on points.

In what was awarded the ‘Performance of the Night’, Kai Kara-France beat Rogerio Bontorin via knockout at the end of the first round in the Flyweight division.

Kara-France hit the Brazilian with a huge right hook and subsequent uppercut, leaving Bontorin crashing to the canvas losing conscious. There was confusion when the fighter got straight back up, before Kara-France ran right back to attempt to punch him again, but referee Herb Dean confirmed that the fight was over to give the New Zealander a fifth UFC win. 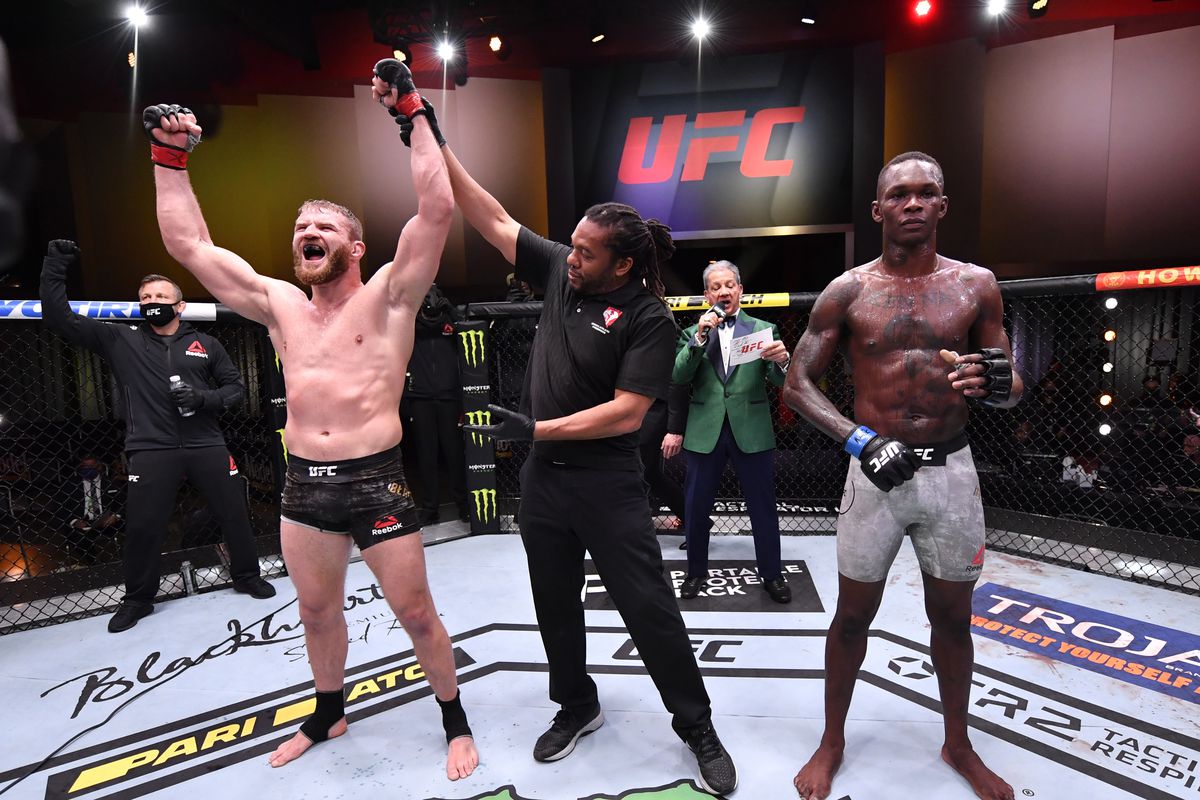