Mixed martial arts fans are in for a treat when two of the top ten bantamweights in the organization meet in the center of the octagon at UFC 60! Cory Sandhagen is fighting for the first time this calendar year. After an unusually long layoff, he will be eager to remind fight fans why he is still considered a contender for the bantamweight crown. His opponent Song Yadong, is in the midst of a three-fight win streak and is in search of his second win of 2022. He will undoubtedly be up for the challenge. There’s a lot to unpack here; without further ado, let’s get into it!

Cory Sandhagen was featured in two main events last year. Unfortunately he suffered defeat in both outings. His split decision loss to T.J. Dillashaw in July was followed by a unanimous decision loss to Petr Yan in October. This is the first losing streak of Sandhagen’s career, and he is anxious to put it behind him. However, his next opponent is far from a subplot and getting back in the win column will be no easy task.

Song Yadong has won each of his last three fights, with the last two coming by way of knockout. At 24-years-old, it appears he is coming into his own and living up to his nickname “The Kung Fu Kid.” Growing up in China, Yadong began competing in professional mixed martial arts at the age of 15. In many Western countries, a lot of athletes turn to combat sports after realizing their dreams of making it big in team sports will not become a reality. However, Yadong has dedicated his life to combat sports and now finds himself on the world’s biggest stage. On Saturday, he will do everything in his power to prove he belongs there.

Middleweight contender Chidi Njokuani carved out his niche in the world of mixed martial arts before making his way into the UFC. He spent four years on the Bellator roster, becoming known as one of the most dangerous men in the division along the way. After participating in Dana White’s Contender Series in 2021, he officially made his way into the UFC in 2022. On Saturday, he will take part in his third fight of the year, with the goal in mind of starting his UFC tenure with an impressive record of three wins and zero losses.

Gregory Rodrigues is a Black Belt in Brazilian Jiu-jitsu and has won three out his first four fights since joining the UFC in June of last year. Prior to joining the organization he spent time as the middleweight champion in both the LFA and SMASH Global organizations. At just 30-years-old, Rodrigues is in his prime and poised to make his mark in the premier mixed martial arts organization in the world. Njokuani and Rodrigues are two fighters with a chip on their shoulders and something to prove; you won’t want to miss it!

Featherweight prospect Andre Fili has been a participant in professional mixed martial arts since 2009, when he was just 19-years-old. Having spent his entire adult life as a professional fighter, Fili is one of the most respected veterans in the featherweight division. However, he is in the midst of a drought, with his last victory coming against Charles Jourdain in June of 2020. Since then he’s suffered two defeats and been involved in a no-contest due to an inadvertent eye-poke. If he wants to get his career back on track, emerging victorious at UFC 260 is an absolute must!

33-year-old Bill Algeo hails from Philadelphia and is a Black Belt in Brazilian Jiu-jitsu. He has looked impressive thus far in 2022, winning each of his first two bouts in dominant fashion. On Saturday, he will go for a hat trick in front of the raucous fans at the Apex Center in Las Vegas. Fili versus Algeo is bound to be an incredible test of wills between two very experienced fighters. Make sure you tune in live to witness all of the action!

Middleweight prospect Joe Pyfer suffered a defeat during Dana White’s Contender Series in August of 2020. In 2021, he ventured over to Cage Fury Fighting Championships to let the mixed martial arts world know he was not discouraged and still had a lot to offer as a fighter. After an impressive showing there, he was invited back to another season of Contender Series where he performed well enough to earn a spot on the UFC’s roster. His bout at UFC Vegas 60 on Saturday will be designated as his organizational debut, but those in-the-know have been aware of Pyfer’s potential for quite some time.

Alen Amedovski is in the midst of a three-fight losing streak. At 34-years-old, there are numerous rumors that he is on the verge of walking away from the sport altogether. Fighting out of Rome, Italy, and being a core member of America Top Team Rome, most pundits believe Amedovski will become a full-time trainer if he does decide to call it quits after a well traveled 10-year career. If this is indeed his swan song, he’ll want to leave the sport with a victory against Joe Pyfer on Saturday.

Canadian heavyweight challenger Tanner Boser is the former heavyweight champion of Unified MMA, an organization headquartered in his native country. After performing twice in the month of June in 2021, winning one fight and losing another, Boser has been inactive this year. His upcoming bout at UFC Vegas 60 will be his first public appearance in the octagon in 2022.

Brazilian heavyweight Rodrigo Nascimento was initially ruled the winner of his bout against Alan Baudot in July of 2021. However, after Nascimento tested positive for ritalinic acid, the fight was ruled a no-contest. Nascimento has since apologized to the mixed martial arts community for the incident and promises to be clean this time around. A win against Tanner Boser on Saturday will most likely usher in the forgiveness of his colleagues.

Middleweight prospect Anthony Hernandez has won two consecutive fights. There are some pundits arguing that a third consecutive victory should earn Hernandez a place among the organization’s top ten middleweights when the new divisional rankings are released early next week. As a Black Belt in Marinoble’s MMA System, and still just 28-years-of-age, the best performances inside the octagon are yet to come for Anthony Hernandez. A win on Saturday could be a major turning point for him, and send his career on a steep upward trajectory.

Canadian middleweight Marc-André Barriault earned two culinary diplomas and worked as a chef until 2021, when he moved to Miami to concentrate on mixed martial arts full-time. His first round submission victory over Jordan Wright in April of this year was one of the most impressive moments of his career. Hernandez and Barriault are two of the most promising prospects in the middleweight division. Be sure to tune in live to witness all of the action!

UFC Vegas 60 can be viewed on BT Sport in the United Kingdom and on ESPN Plus in the United States. As always, we’ll have all the latest updates about the outcomes of the fights, as well as in depth analysis, available right here at World in Sport! 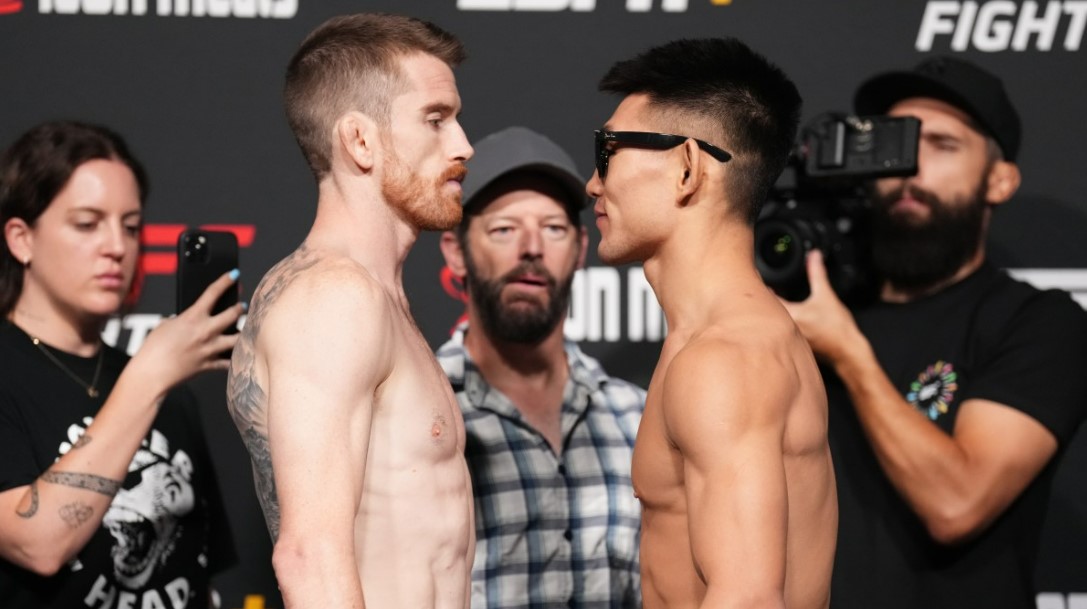