In the fall of 2018, UFC CEO, Dana White conducted a reality show that doubled as a fighting tournament. The title of the show was The Ultimate Fighter: Heavy Hitters. The captains for each team were two of the best UFC middleweights in all of mixed martial arts, Robert Whittaker and Kelvin Gastelum.

Known for doing everything in his power to give fans what they want, Dana White then decided to capitalize on the momentum his two-star middleweights had gained and pit them against each other at his next main event. UFC 234 was to have a main card of Whittaker vs. Gastelum for the undisputed middleweight championship of the world. And then disaster struck. Just hours before the two men were set to face off in the octagon, Whittaker was forced to pull out of the event. He later underwent emergency surgery to address an abdominal hernia.

More than two years later, Robert Whittaker and Kelvin Gastelum will finally get their chance to give fight fans the matchup they’ve been craving for a very long time. Although Whittaker lost his belt to Israel Adesanya in October of 2019, he’s on a two-fight win streak and has displayed the skills that saw him initially become champion.

For his part, Gastelum is coming off of a convincing unanimous decision against Ian Heinisch in February. Both men looked impressive in each of their latest bouts and both appear to be at full strength heading into Saturday’s match. Let’s take a closer look at the matchups that promise to make UFC’s Fight Night on April 17th a night worth watching at UFC Vegas 24.

This bout features the number one contender vs. the eighth-ranked middleweight in UFC. It’s very possible that the winner of this match is rewarded with a title shot against Israel Adesanya, who is still the middleweight champion after an unsuccessful attempt to move up to light heavyweight.

While Gastelum would have to make quite the leap in rankings to be considered the next man up to challenge for the belt, the fact that he was slated for a title shot not so long ago will definitely help his argument.

While Dana White certainly aims to put on good fights, he also aims to get great ratings. If Gastelum is impressive against Whittaker, fans may clamor to see him face Adesanya. In which case Dana White would certainly grant their wish. For his part, an impressive win on Saturday almost guarantees Whittaker a shot at redemption against the man who dethroned him in October of 2019.

These two men respect one another as competitors, but it is Israel Adesanya and the middleweight championship they both have their eyes on.

It’s been almost a year since we last saw Jeremy Stephens in the Octagon. For Drakkar Klose, his last official bout was over a year ago. Both men will be looking to get back in the swing of things on Saturday and each of them desperately needs a win. Stephens hasn’t won a fight since February of 2018. Klose was knocked out by Beneil Dariush in his last performance.

The winner of this match will see a jump in the rankings and an opportunity to perform on a more regular basis. Both men are approaching their mid 30’s and neither has held a major championship. The loser of the match may want to consider retirement.

Arlovski is a 42-year-old legend who was the UFC heavyweight champion with one successful title defense in 2005. Since then, he’s become as well known for appearing in movies alongside Jean-Claude Van Damme and Dolph Lundgren as he is for being a mixed martial artist.

In February he lost via submission hold to Tom Aspinall. While his best days in the octagon are clearly behind him, Arlovski must be appreciated for his contributions to the sport. There are rumors that he’s eyeing Saturday’s match against the 31-year-old Sherman as a swan song before heading off to retirement.

Both of these men are coming off of disappointing knock out defeats at the hands of their most recent opponents. Malkoun is only 25 years old and he wants to show the world that he will not let his disappointing octagon debut derail his career before it gets any real momentum. Alhassan on the other hand is 35 years old, has missed weight in each of his last two bouts, and suffered defeat both times.

This appears to be an attempt by Dana White to boost the confidence of a young fighter with potential at the expense of an older fighter whose best days are behind him. Alhassan’s camp is hoping he still has enough gas left in the tank to produce a respectable performance; if not it might be time to walk away from the sport.

In June of last year, Peña tested positive for marijuana and then proceeded to lose to Khama Worthy via chokehold. Alexander Munz made his debut in August of 2020 and lost by decision. At 27 and 31 years old respectively, each of these men has plenty of fights left in them if they’re able to get back on track.

Although Peña is younger, he’s the more experienced fighter and he’s considerably taller than Munoz. Standing at 6’3″ tall his is a giant among lightweights. Most pundits expect him to get his career back on track with a victory on Saturday.

Coming into their matchups with almost identical records, each of these fighters is out to prove they deserve a move up in the rankings and a shot at a contender.

Algeo is looking to continue the momentum he gained by winning a decision in his most recent bout in November. Ramos is looking to bounce back from a knock out he suffered at the hands of Lerone Murphy in July of last year.

In addition to these bouts on the main card, UFC also has six preliminary bouts for viewers to enjoy as well. The event can be viewed on BT Sport in the United Kingdom and on ESPN in the United States. As always, Dana White has put together a talented roster full of compelling storylines. These athletes are sure to treat MMA fans to the high-quality fights we’ve come to expect over the years. 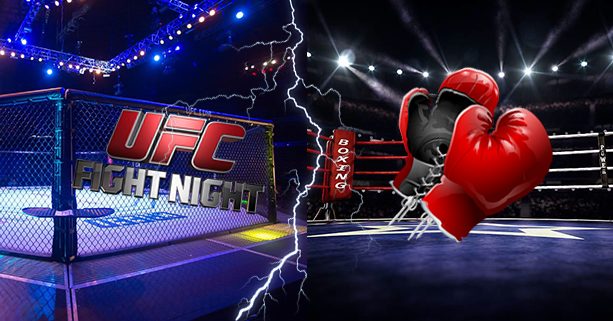