The light heavyweight division is one of the most exciting divisions in the UFC. Newly crowned champion, Jiří Procházka, is a truly imposing figure with the potential to execute a reign of terror that rivals former light heavyweight champion, Jon Jones. His loudest challenger, Magomed Ankalaev, is fresh off of an impressive win at UFC 277, and a showdown between the two of them looks imminent. Meanwhile, the rest of the division remains talented and hungry. Two of the best fighters the division has to offer, Thiago Santos and Jamahal Hill, are set to meet in the middle of the octagon for the main event of the evening during the next edition of Fight Night from the Apex Center in Las Vegas. There’s a lot to unpack here; without further ado, let’s get into it!

Although Thiago Santos has lost four out of his last five fights, he remains the sixth ranked fighter in the light heavyweight division. That is largely due to the fact that two of those losses came at the hands of men who were either active champions or would later become champion, when he suffered defeats to Jon Jones and Glover Teixeira. Although there is no such thing as a moral victory in sports, there are still some who believe Santos was the rightful winner of his bout for the championship belt in July of 2019. His record may have taken some recent damage, but his reputation as a true warrior inside the octagon is still fully intact.

Jamahal Hill has only suffered one defeat in his professional mixed martial arts career. That came at the hands of Paul Craig in June of 2021. Craig, being the more experienced fighter and one of the most technically sound grapplers in the sport, was able to dislocate Hill’s elbow and cause his arm to bend the wrong way. It looked like a nasty breakage that would require surgery; luckily for Hill it was just a dislocation. Hill has bounced back from that defeat and is now on a two-fight win streak. He has earned his place in the organization’s divisional top ten. He knows a win against a respected veteran like Santos would do wonders for his career. You won’t want to miss the action when these two elite athletes meet in the center of the octagon!

Welterweight prospect Vicente Luque has been on the UFC’s roster since December of 2015, yet still has never received a title shot. Although he has been a consistent performer, he has not managed to excite the fans the way a Kamaru Usman or a Colby Covington are able to do. However, although he has not been given a chance to compete for the crown, Luque’s skills are both widely known and uniformly respected. He is a Black belt in Brazilian Jiu-Jitsu with five years of experience as a professional fighter in Brazil before he made his debut in the United States. Luque is seen as the gatekeeper of the division; if a welterweight wants to be considered elite, they must go through him first.

Since earning a spot on the UFC’s roster in February of 2018, Geoff Neal has been looking for the breakthrough performance that would catapult him into the organization’s upper class. He consistently performs well, but back-to-back losses to Stephen Thompson and Neil Magny were considerable setbacks for his career. His victory over Santiago Ponzinibbio last December at UFC 269 was viewed as a comeback fight and a performance that saved his place in the organization. If he is able to add a win over Vicente Luque to his resume, it will be a major step in the right direction.

Mohammed “The Motor” Usman is a heavyweight from Nigeria, who happens to be the younger brother of reigning welterweight champion Kamaru Usman. He will take part in The Ultimate Fighter grand finale in a matchup against fellow heavyweight prospect Zac Pauga as part of the upcoming Fight Night offering. The winner of the bout will be declared this season’s TUF winner and be given a contract with a guaranteed spot in the UFC’s roster. Much has been made about Usman due to his imposing physique and his famous last name; however Pauga is a highly touted prospect and should not be taken lightly. This should be an exciting fight for any fan who wants to see the next wave of elite mixed martial arts heavyweights perform on the big stage for the first time!

Women’s flyweight prospects Brogan Walker and Juliana Miller will face off for their division’s TUF finale on Saturday. Walker is known in mixed martial arts circles for her time on the Invicta Fighting Championships roster. Miller, on the other hand, has appeared on two Invicta fight cards, but has spent the majority of her career fighting in small-circuit venues in Mexico. One of these two hopefuls will be granted a spot on the UFC’s roster after their bout; the other will be forced to go back to the drawing board, and figure out their next move.

After winning his first five fights in the UFC, heavyweight prospect Augusto Sakai has lost his last three bouts. Once seen as a rising star in the organization, there are now doubters who openly wonder if he has what it takes to climb towards the top of the division. His next opponent, Sergey Spivak, is a much less experienced fighter but having won four out of his last five fights gives him the momentum heading into this bout. This is a case of an aging warrior, trying to reclaim his career, against a young up-and-comer who is hungry to make a name for himself. These two won’t hold anything back to emerge victorious once they meet inside the octagon!

Women’s flyweight challenger Ariane Lipski missed her target weight by less than three pounds at the official weigh-in. Her opponent Priscila Cachoeira agreed to take the fight as a catchweight bout. Both women are respected fighters who have faced some of the biggest names in the division. However, neither of them has been able to secure a signature win against the most recognized competitors in the sport. This should be a fun fight between two octagon savvy professionals who are known to never back down and always take pride in their preparation.

UFC Vegas 59 is available on BT Sport in the United Kingdom and on ESPN Plus in the United States. As always, we’ll have all the latest updates about the outcomes of the fights, as well as in depth analysis available right here at World in Sport! 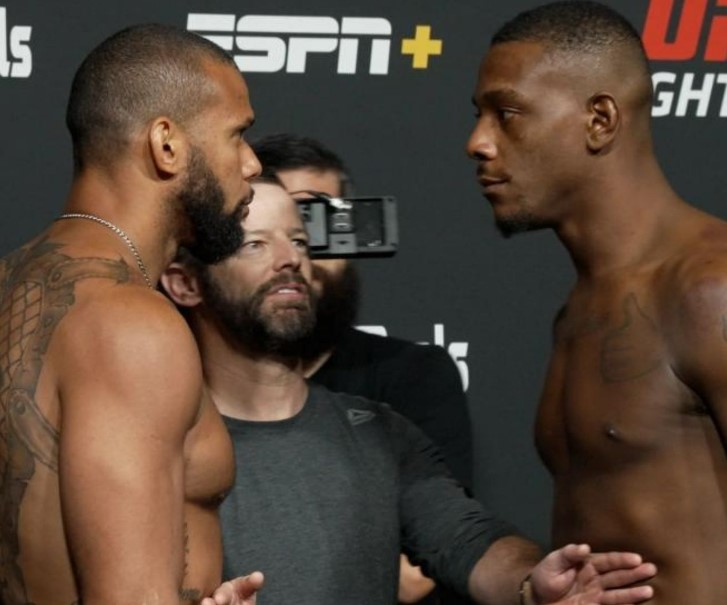