The latest installment of Fight Night for The Ultimate Fighting Championship, served as a night of lessons. There were instances of veteran ring savvy guiding a fighter to victory. However, not to be outdone, youth and athleticism helped other fighters gain impressive wins. Even the different ways in which fighters physical attributes play into their styles proved relevant throughout the night. Some taller fighters displayed how length could be a tactical advantage, while others suffered due to a lack of leverage and a failure to stay off the mat. All in all, fight fans were served with a smorgasbord of styles to choose from on this night. Let’s get into it.

After an evenly matched first-round filled with grappling, the action picked up significantly in round two. Daukaus started the round with a nice combination but was unable to gain momentum. Hawes was able to pull off a series of strikes and kicks that turned the momentum of the fight in his favor. A low blow by Hawes with a little over a minute left in the round may have served as a blessing for the winded Daukaus, who used the referee’s warning as an opportunity to regather his breathing.

In round three, Hawes proceeded to put the fight out of reach. His early takedown of Daukaus displayed his physical dominance. He pummeled his opponent with strikes for the remainder of the round; Daukaus never made a sincere effort to get off the mat and instead appeared to go into survival mode. The result was a unanimous decision victory for Hawes, who used the post-fight interview to issue a challenge to the reigning middleweight champion Israel Adesanya.

Round one was fairly even. It was an incredibly active round with high-intensity grappling but neither fighter was able to establish a clear cut advantage.

In round two, Gillespie’s superior conditioning became evident. Fighting for the first time since November of 2019, Gillespie was able to dominate after scoring an early takedown. He maintained the dominant position on the mat and began pummeling Ferreira with punches. Eventually, the referee shouted the command “fight back” and Ferreira, who failed to respond. This led him to stop the fight. After a year and a half layoff from the octagon, Gillespie had triumphantly returned with a second-round stoppage.

Maurice Greene is a towering 6’7″ tall. Although height can sometimes be an advantage, it certainly worked to his detriment against Marcos Lima. Greene clearly entered the match with a game plan centered around using his reach advantage to keep Lima on the outside. Lima had other plans.

In round one, Lima scored an early takedown; Greene lacked the leverage to get off the mat. Lima’s stocky build and lower center of gravity clearly caused a problem for him. After suffering a similar fate in round two, Greene deliberately put his fingers in Lima’s eyes near the end of the round. In retaliation, Lima punched Greene after the bell. This led the referee to issue each of them a stern warning before the beginning of round three.

Although both men were clearly angry entering the third and final round, it proved to be a replay of the previous two. Lima scored an early takedown and Greene appeared to accept defeat. Lima won an easy unanimous decision. It looks as though Greene may want to consider kickboxing instead of mixed martial arts. His length would serve him well there; it certainly hasn’t helped him in the octagon.

Neal was able to counterpunch Magny’s offense early in round one. Neal clearly wanted to land big shots to wear Magny down but became entangled with the taller man’s grappling tactics whenever he got inside. Obviously frustrated, Neal attempted to take Magny to the mat but was unsuccessful.

Magny would go on to demonstrate exactly how a taller fighter is supposed to use his height to his advantage throughout the rest of the fight. He stayed aggressive throughout rounds two and three, keeping the shorter Neal outside with the jab. Whenever Neal did try to initiate the attack, Magny wrapped him up with his long arms and thwarted his attempts. Magny sealed the deal with an impressive takedown near the end of round three. For his efforts, he was rewarded with a unanimous decision by the judges.

Cowboy is undeniably a mixed martial arts legend. His longevity in both World Extreme Cage Fighting and UFC has gained the respect of fight fans across the globe. However, he’s 38 years old and not as explosive as he was in his prime.

A hungry up and comer by the name of Alex Morono seized the opportunity to face the legend and was rewarded with the biggest victory of his career. After charging Cerrone to start the fight, Morono’s pressure forced him into a crucial mistake. Swinging with a wild left in an attempt to regain momentum, Cowboy missed badly. Morono countered with an overhand right that clearly hurt his opponent. Sensing that he had an opportunity to stop the fight, Morono hit Cerrone with a barrage of punches that led the referee to stop the contest. Alex Morono’s camp has to be thrilled with a marquee victory that is sure to give him a big boost in UFC’s welterweight division rankings.

Rodriguez was able to use he three-inch height advantage so well that she forced Waterson to smile out of frustration on more than one occasion throughout the fight. It was almost a visual signal that she was overmatched and she knew it. To Waterson’s credit. she kept her foot on the gas the entire fight and even had some impressive moments. If Rodriguez lost her composure or her focus, Waterson would have been able to capitalize.

The first three rounds were an exhibition of a skilled fighter with great timing who knows how to use striking to her advantage. Rodriguez kept Waterson outside with the jab. On the occasions when Waterson was able to get close, Rodriguez made her pay with well-timed knees and kicks. In round four, Waterson scored a huge takedown and remained in the dominant position throughout the round. This was easily her best round of the night and an impressive show of resilience. Waterson remained competitive in round five, resorting to kicks to try and turn the tide in her favor but it was too little too late. Rodriguez was awarded the unanimous decision.

Overall, it was another entertaining evening from the UFC Apex in Las Vegas. Every approach to fighting was on display and students of the art walked away with valuable lessons. If there’s one primary take away from this evening it would have to be that there’s more than one way to be successful in the world of mixed martial arts. Athletes just have to find the style that works best for them and then proceed to hone their craft accordingly. 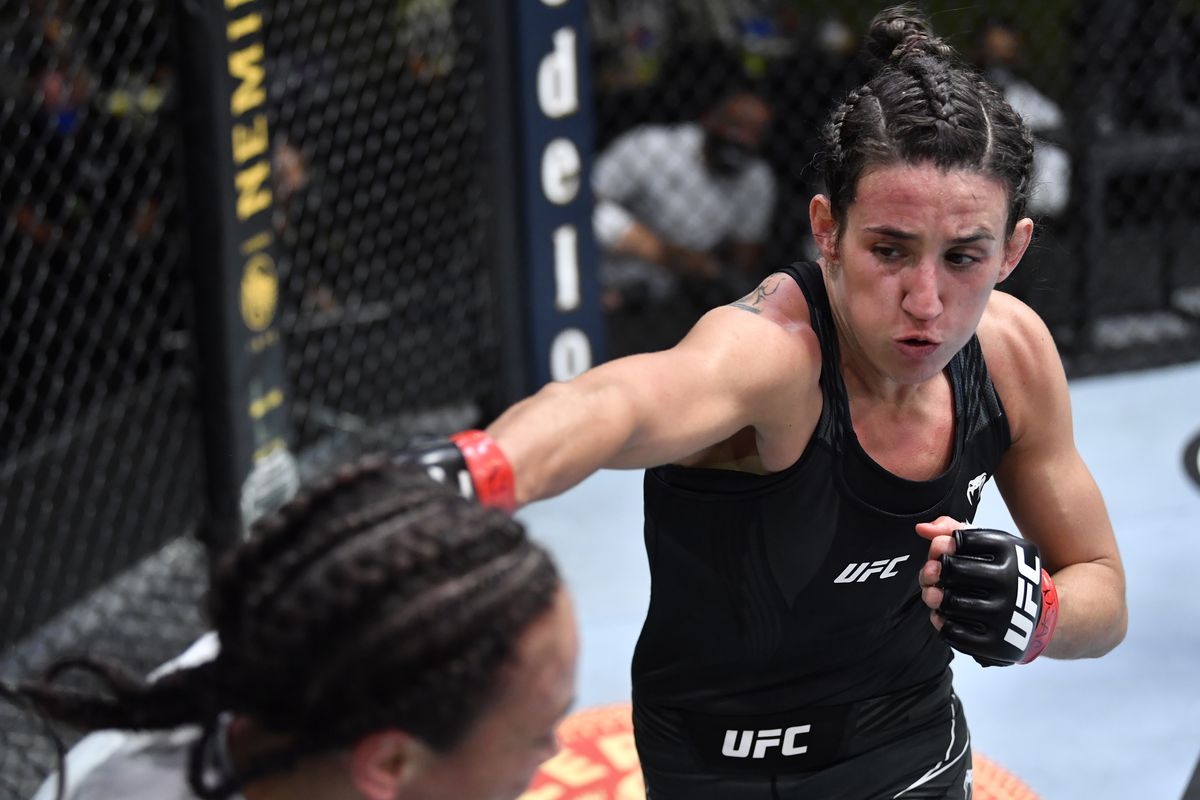