For over a century, MLB teams have used the same, boring methods to try to win games. They have resisted being innovative and attempting to change the way the game is played. In recent years, some teams have tried to develop new strategies using statistical analysis (i.e. “Moneyball”) as their backbone. No one has come up with a perfect system- yet. This article will discuss how changing traditional pitching strategies can lead to a complete shift in how the game works, and how teams can be beaten.

A little over halfway through this season, the Royals lead their division by eight games, and the Rays are still in the mix in the AL East at seven and a half games back. Their starting pitcher ERAs are noteworthy, as the Royals’ has risen from 3.60 last season to 4.26 through 98 games played this season, and the Rays’ has remained fairly similar, going from 3.48 last season to 3.43 through 101 games played. Their bullpen ERAs have gone in opposite directions, though, with the Royals’ dropping from 3.30 to 2.13, and the Rays’ rising from 3.71 to 3.76. Thus, for the Royals, handing the ball over to their bullpen earlier on has resulted in fewer runs late in games and, consequentially, more wins. For the Rays, their starting pitchers have benefited from only seeing the opposing lineup twice, but their bullpen hasn’t been good enough to hold opposing teams in the last few innings. Tampa Bay also is ranked 28th in total runs scored, and 27th in team batting average, so their offense can be to blame for their inability to dominate the AL East. Kansas City, on the other hand, is ranked 7th and 2nd overall in total runs scored and team batting average, respectively. The Royals’ potent offense combined with their new pitching system has resulted in total domination of the American League (they are second in all of baseball only to the St. Louis Cardinals in the NL). The Rays haven’t had the offense to back them up, but their pitching strategy has kept them in the hunt. The Royals’ and Rays’ new strategies and recent success has forced me to ponder, “How can teams learn from what they are doing, and how can their strategy be improved to fit all small to mid-level market teams and turn them into long-term contenders?”

My strategy combines the Rays’ and Royals’ philosophies along with other analysis while also improving the health and longevity of major league arms. This might sound complicated at first, but I will break the whole process down. Essentially, under my system, pitchers would have a set pitch count between 46-60, ideally staying near the middle of that range, but an absolute cap at 60. This is the recommended range for a 17-18 year old pitcher (the highest age group available) to stay within to be ready to pitch again after only two days of rest (via PitchSmart). This pitch count would, in theory, get the starter through roughly three innings, since the average pitch count per inning is about 15. Ideally, he would only see the opposing lineup once, but might see the top of the lineup twice if there are a couple of hits. Once three innings is up, or 60 pitches is hit, the starter’s night is done. The process is then repeated for the middle reliever, who should be able to take the team through the sixth inning. The last three innings then becomes discretionary; if your team is up by several runs, or down by several, repeat the process again to get through nine, using three pitchers total in the game.

Strategies can change depending on the score. If the game is close, a pitcher can be brought in to handle each inning (i.e. a swing man, setup man, and closer), or a pitcher can be used for two of the innings (making sure the max pitch count is under 45), then bring in the closer. This process can be repeated on a day-to-day basis, with the closer being any interchangeable group of pitchers, rather than focusing on one guy to do the job. Most roster consist of twelve pitchers, so in general, a rotation could be constructed with nine pitchers, three pitching per game for three days in a row, and then it starts over. This gives the pitchers the recommended two days off, and also allows for three extra pitchers to fill the void in case pitch counts are hit early, or if a pitcher needs to be taken out early, or to close out a game.

This may sound like a lot of arms being used per game, and that by July, all pitchers will be suffering from arm injuries. However, this will actually prevent arm issues, as pitch counts will be much smaller than what pitchers have become accustomed to, and there will be more days of with the ability to shuffle rosters. For example, after every four rotations, or about every twelve games, three minor leaguers can be swapped for three fatigued pitchers, giving them an extra day off, and letting some minor leaguers show there stuff at the bid league level. This rotation can be shuffled so many different ways in order to give extra days off, so in the long-term, it would actually prevent injuries.

Are these arbitrary numbers and will this actually be effective? With statistics supporting the facts that hitters’ OPS and HR/9 innings decrease as he sees a pitcher less times during a game, and the sharp difference between bullpen ERAs (who throw less innings and see hitters less often) and starter ERAs (who throw more and get damaged later in their outings after seeing hitters more than once), this system will work over the course of a season, and be almost unstoppable during the postseason. Imagine three to four relievers with fast, hard breaking stuff pitching to a team during the cold month of October, who is only able to get one at bat per pitcher. Pitchers won’t be trying to save gas in the tank for later on and end up making a mistake early because they have a set timetable and they know they just need to get nine guys out, rather than trying to get eighteen to twenty-seven out.

The goal of the entire organization would be focused around winning, rather than individual accomplishments. There would be no more complete game shutouts or innings pitched leaders, no saves leaders or strikeout leaders, and maybe no Cy Young Award Winners. These thoughts haunt the traditionalists, but isn’t the goal of baseball to win championships, not to attain individual accomplishments? The minor league system would stay pretty much the same, in order to still have the ability to trade young starting pitchers to teams who still use the traditional system, and so that when they come up to the big leagues, the workload is reduced immediately. This has big implications too, as starters who convert to relievers generally perform much better as relievers, such as Tim Lincecum, Andrew Miller, Neftali Feliz, Dennis Eckersley, etc.

Imagine the different combinations of pitchers that could be used during a game. A soft-throwing, crafty left-hander could start the game. Then, a hard-throwing right-hander could follow. To finish, another lefty could be brought in, depending on the matchups left, or a sinkerball pitcher could close. There are countless possibilities with a bullpen full of different style pitchers. Closers, and relievers in general, are more successful than starters because it is a change for the hitter. It’s a different motion, a different speed, different timing, different sets of pitches, etc.

This would also have huge salary implications for teams, which helps out the small and mid-market level teams with budget constraints. Rather than overpaying for starters, who easily rake in $10 to $20 million per year, teams could focus on getting solid pitchers who would be paid at the reliever rate to do the same job. Sign guys like Pat Neshek ($5.5 mm/yr), Boone Logan ($5.5 mm/yr), Jordan Walden ($2.675 mm/yr), Vance Worley ($2.45 mm/yr), Trevor Rosenthal ($535,000/yr), Dellin Betances ($507,000/yr), and other inexpensive relievers who have plus stuff, but are a fraction of the cost of an elite starter. These savings will add up, especially for the smaller market teams. This means more money can be spent on offense, which in turn means more runs and more wins.

It’s time for teams to stop living in the past and adopt a new method to become a perennial contender. A high powered offense accompanied with this pitching system adds up to long term sustainability and a culture of winning that can result in more division takeovers immediately. 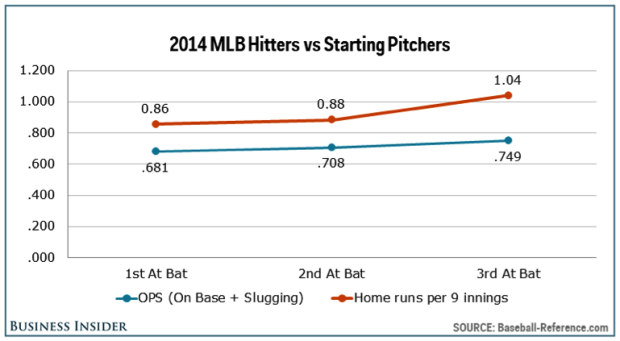