Tuesday Evening saw another four games from the Premier League which started another full programme of mid-week fixtures, starting with two early evenings kick off’s which saw the bottom two clash at Bramall Lane with both sides knowing only a win would do, and then an in-form Gunners side travelling to an out of form Wolves knowing a win would take them into the top six…and above Spurs too…

The Blades came from behind to net a third win of the season and defeat one of their relegation rivals in the process. Five minutes before half time The Baggies grabbed the lead after Matt Phillips had poked home a rebound after Aaron Ramsdale had got his body in the way of a poke at goal by Mbaye Diagne, but ten minutes after the break the Blades found a leveller after Jayden Bogle thumped an effort into the bottom right corner after a ball into the box wasn’t dealt with, and this big game down at the bottom was back in the melting pot. With seventeen minutes to go the Blades grabbed the winner as after another cross into the box wasn’t dealt with, the ball fell to Billy Sharp in the six-yard box and he reacted quickest to poke the ball into the net, and the hosts had picked up a massive win against one of their relegation rivals. 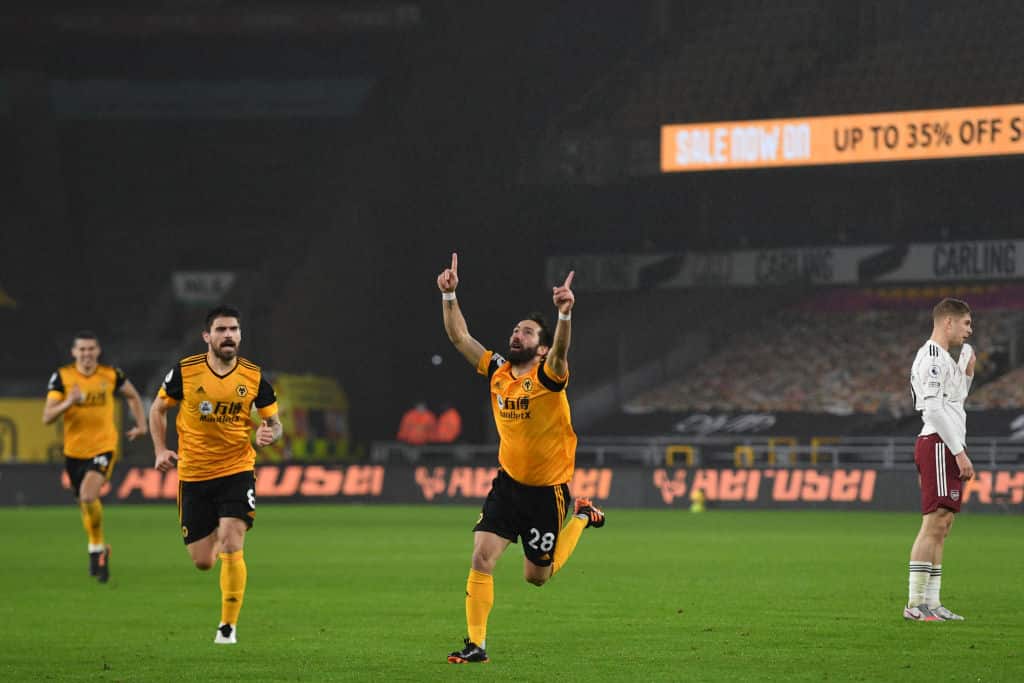 And over at Molineux Wolves came from behind as well to defeat nine-man Arsenal in a game that turned on a red card decision in first-half stoppage time. The Gunners saw Bukayo Saka hit the post, have another ruled out after offside against Alexander Lacazette and then Nicolas Pepe have an effort strike the woodwork after Rui Patricio had tipped an effort onto the bar, but just past the half-hour mark they did grab a deserved lead when Pepe produced a brilliant piece of skill to nutmeg a defender and then curl home into the far corner. Wolves had been second best for the majority of the opening half but deep into first-half stoppage time Arsenal was dealt a blow after Willian Jose broke through and was brought down by David Luiz for a penalty and saw a straight red given to the Arsenal defender, and Ruben Neves levelled from the spot, and you felt that it was a huge moment in the game and the hosts must have felt they could not have a better chance to end their poor run of form.

Three minutes after the break came an absolutely brilliant strike from Joao Moutinho from long range that thumped in off the post for his first-ever goal at Molineux, and Wolves now had the lead, and then with eighteen minutes to go Bernd Leno came out of his box and handled the ball ahead of Adama Traore who was trying to get on the end of a ball through, and the Arsenal keeper was sent off, meaning the Gunners were now down to nine, extraordinary. Could the nine men possibly deny Wolves the win though?

The only opening the visitors had saw Willy Boly brilliantly block a Pierre-Emerick Aubameyang effort, and Wolves managed to see out the game and collect a massive win, their first in nine games, whilst defeat for Arsenal sees their seven-game unbeaten run come to an end.

Now onto the late evening contest’s, which saw Man United looking to get a win over Southampton at Old Trafford to take them level on points with leaders Man City, whilst Newcastle and Palace were looking to build on weekend wins in their contest at St James Park…

United netted nine as they ripped nine-man Saints to shreds at Old Trafford, there were less than two minutes on the clock Southampton were down to ten men after an absolute shocking challenge from Alexandre Jankewicz on Scott McTominay, and an already difficult looking night was now made even more difficult, the 19-year-old Swiss midfielder was making his Premier League debut, but he was too pumped perhaps and Mike Dean had no option but to show the red card.

Seventeen minutes in and United led, and it was the two full-backs who combined to give them the advantage, as Luke Shaw crossed for Aaron Wan-Bissaka to finish from close range in off the post for the rarest of goals, and you felt it would be a long evening in the Manchester rain for The Saints, and just past the midway point of the first half it was two for the hosts as Shaw was involved again, playing in Mason Greenwood who played a ball across the box to Marcus Rashford who finished first time via Alex McCarthy’s hand, and United was cruising. Eleven minutes before the break and United had a third, as the ball broke to Rashford who played in a marvellous ball which Saints defender Jan Bednarek could only turn into his own net, and then six minutes before the break, a ball into the box by Shaw found Edinson Cavani who planted a wonderful header into the far corner, and United were rampant against the ten men.

Che Adams thought he had given Southampton something to cheer when drilling home across goal into the far corner eight minutes into the second period, but VAR deemed it offside after drawing up those ridiculous lines to say he was, it was very tight let’s just say, but the visitors knew by now this wasn’t their evening, and with just over twenty minutes remaining United made it five after a good ball in by Bruno Fernandes saw Anthony Martial, on as a sub at half time, control with his chest before smashing a brilliant right-footed effort into the roof of the net. And a couple of minutes after that it was six for the hosts when McTominay drilled home a beauty from the outside the box after McCarthy had saved an initial effort from Greenwood and the ball had been cleared to him.

The Saints night was then summed up late on when Martial was adjudged to have been brought down by Bednarek to deny the United player a chance to score, and after a delay whilst VAR had a look and then referee Mike Dean going over to the monitor to have a look, the penalty was given and Bednarek was sent off, meaning the Saints were down to nine. Fernandes stepped up and slotted home the penalty and United had seven, and it was eight as the game entered stoppage time when a ball in from Wan-Bissaka flicked off a defender and saw Martial control and thump home from close range. And United had time to make it a record-equalling 9-0 win after Fernandes headed a cross back into the six-yard box for Daniel James to flick home into the far corner, and the rout was complete.

Tough tough night for the Saints, an already depleted squad and now two more missing for the next three games with those two red cards, tough times for them.  Superb from United though, they punished their opponents to the full after that very early red card and go level on points with City at the top.  Over at St James Park, Palace came from behind to defeat Newcastle, the hosts had the perfect start as after two minutes they led after a wonderful hit from Jonjo Selvey, latching onto Callum Wilson’s knockdown to drill a rasping drive in from the edge of the box, and could have been out of sight after creating plenty early on, but just before the midway point of the first half Palace levelled after an absolute rocket from Jairo Riedewald after a corner had fell to him around twenty-five yards out, although it did take a deflection off Ciaran Clark too before rocketing into the roof of the net.

And then just like that Palace led three minutes later after Gary Cahill had powered home Eberechi Eze corner with his head and after a good start Newcastle now found themselves behind in this one. Wilfred Zaha then saw a goal ruled out for offside as Palace tried to find a third, and Miguel Almiron then saw a free-kick glance off the crossbar as Newcastle looked for a leveller, and as the game entered the latter parts of the second period Shelvey curled over as Newcastle continued to press, although Palace should have sealed the points when Andros Townsend somehow scuffed wide.  Palace though did hold on to net back to back wins, whilst for Newcastle, it’s defeat after such a good win at the weekend, which will be very disappointing for them.

Wow, let’s look at how the table looks after a dramatic evening in the Premier League… 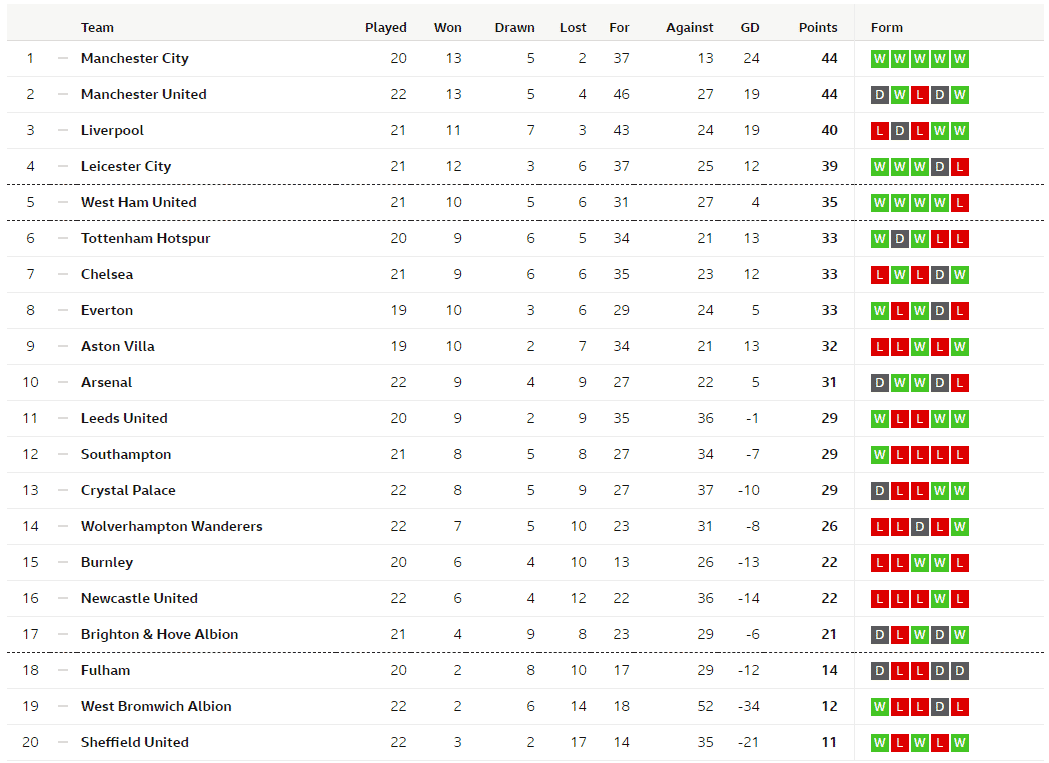 United go level with City at the top after there record-equalling win this evening, whilst a welcome win for Wolves gives them a twelve-point cushion to the bottom three now.  The Blades are now just a point behind West Brom but remain ten points from safety despite their win over The Baggies, and Palace’s second win in a matter of days takes them into the mid-table pack and just four points off the top six now.

These are the remaining games to come this mid-week…

I’ll be back with a look back at Wednesday’s action tomorrow following the conclusion of those fixtures. 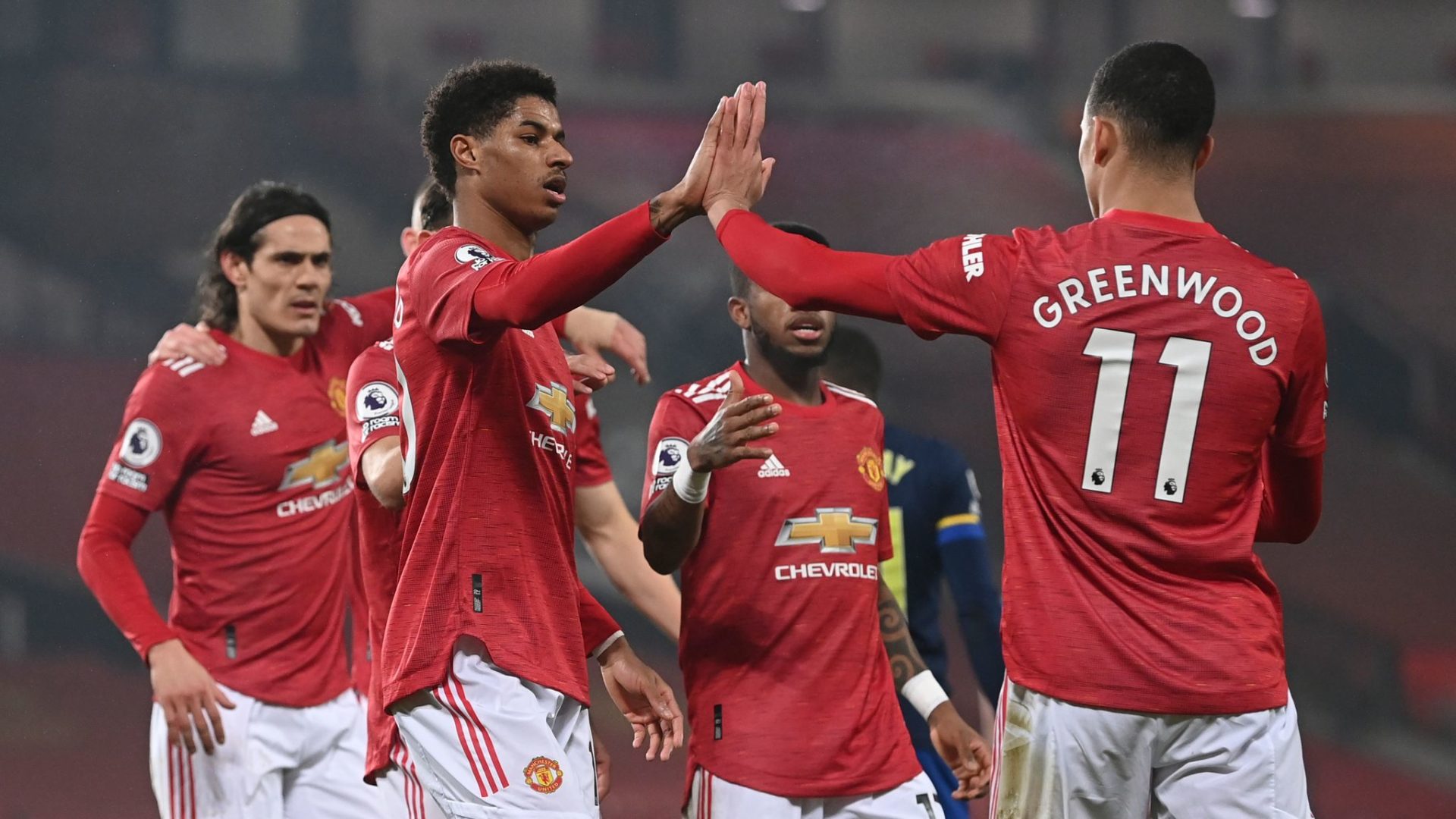