Wednesday evening saw five more Premier League games, beginning with matches from Turf Moor and Craven Cottage.  City was looking to increase the lead at the top back to three points with victory against Burnley, whilst Leicester was looking to get back above Liverpool into third for the time being by grabbing a win against struggling Fulham who desperately needed the points themselves…

Two first-half goals saw City cruise to victory at Turf Moor, it took City just three minutes to breakthrough, and it was an error from Burnley keeper Nick Pope, as he could only parry an effort from Bernando Silva into the path of Gabriel Jesus who had the simple task of heading into the corner of the net, and Burnley had had the worst possible start, and then seven minutes before the break City increased their lead when Ilkay Gundogan was played in down the right and crossed for Raheem Sterling to tap home from close range, and you felt the game was as good as done at that point. City dominated the ball after the break although found it tougher to break through a very compact Burnley backline, they got the job done with those two first-half goals to go three clear again at the top after netting a thirteenth straight win in all competitions.

And two first-half goals were also enough for Leicester to take all three points at Craven Cottage against Fulham, The Foxes grabbed the lead after seventeen minutes when James Maddison crossed from deep and found Kelechi Iheanacho who headed home from the yards out for his first Premier League goal in fifteen games, and a minute before the break Leicester doubled their lead thanks to another Maddison assist, as he burst into the box before feeding the ball into the path of James Justiin who went round the keeper and tapped into the empty net. It means Leicester do go above Liverpool into third for now as they bounce back from their disappointing loss at the weekend, whilst for Fulham it’s another loss and they fail to close the gap to safety, which remains seven points to Brighton.

Onto the late evening games now and matches from Elland Road, Villa Park and Anfield. A win for Leeds would take them into the top ten, whilst Everton knew a win could see them into the top five, Villa or West Ham knew victory could see them end the evening fifth, and Liverpool knew a third straight win would see them back into third and just a point behind United in second and four behind City ahead of their mammoth clash at Anfield on Sunday…

The Toffees bounced back from a disappointing loss at the weekend to get back to winning ways with victory at Leeds. Everton grabbed the lead out of nowhere after nine minutes when Lucas Digne got away down the left, swung over a cross that Leeds did not react too, and it allowed Gylfi Sigurdsson to dart in and finish from close range, and then just before the break Everton doubled their lead when Dom Calvert-Lewin ended his goal drought after sending home a diving header at the back post which had been set up by Ben Godfrey who nodded on a Sigurdsson corner to the Everton striker, and the visitors now had complete control of the contest.

Early on in the second half though Leeds got themselves back into the contest as Patrick Bamford set up Raphinha to apply a side-footed finish after The Toffees had chances to clear their lines, and although Leeds put the visitors under immense pressure to try and find a leveller, Everton held on to grab a decent three points and bounce back from their weekend loss to Newcastle.

Over at Villa Park and Jesse Lingard shined on debut as he helped The Hammers to a superb win against Villa, after a goalless first period the Hammers edged ahead six minutes into the second period with a lovely goal, as Michail Antonio won a header, Said Benrahma popped through a fine pass to Tomas Soucek, and the midfielder thumped a first time shot across goal and into the far corner, and they doubled their advantage eleven minutes into the second period after Lingard, who was having a fine debut for the visitors, was picked out by Antonio and he hit a powerful strike which Emi Martinez could not keep out.

Villa thought they had set up a grandstand finish when they pulled one back with nine to go after Jack Grealish played a wonderful pass to Ollie Watkins who got between two defenders and thumped home, but moments later West Ham sealed the points, and it was Lingard who had a second of the evening as after West Ham countered at pace through Antonio and Lingard, and the latter thumped a shot from twenty yards out at goal and Villa keeper Martinez allowed the ball to go through him and in. It means The Hammers remain fifth and are just two points of fourth, whilst Villa are ninth, six points behind their opponents now.

Finally, up at Anfield, Brighton stunned their opponents by netting early in the second period to pick up a huge win. After a goalless first forty-five minutes at Anfield which saw Brighton have the best chance, the Seagulls grabbed a shock lead ten minutes into the second period after a deep cross found Dan Burn at the back post, and he headed back into the danger zone where a Nat Phillips clearance went onto Leandro Trossard’s thigh and then onto the boot of Steven Alzate and then it looped into the far corner, whatever happened it was a lead for the visitors and Liverpool needed to find a spark after being rather flat for the contest so far. They could not find this spark though and fall to back-to-back home defeats for the first time since 2012, and they now sit in fourth, seven points off leaders Man City. Not a good night for Jurgen Klopp and his men.

This is how the table looks after tonight’s action… 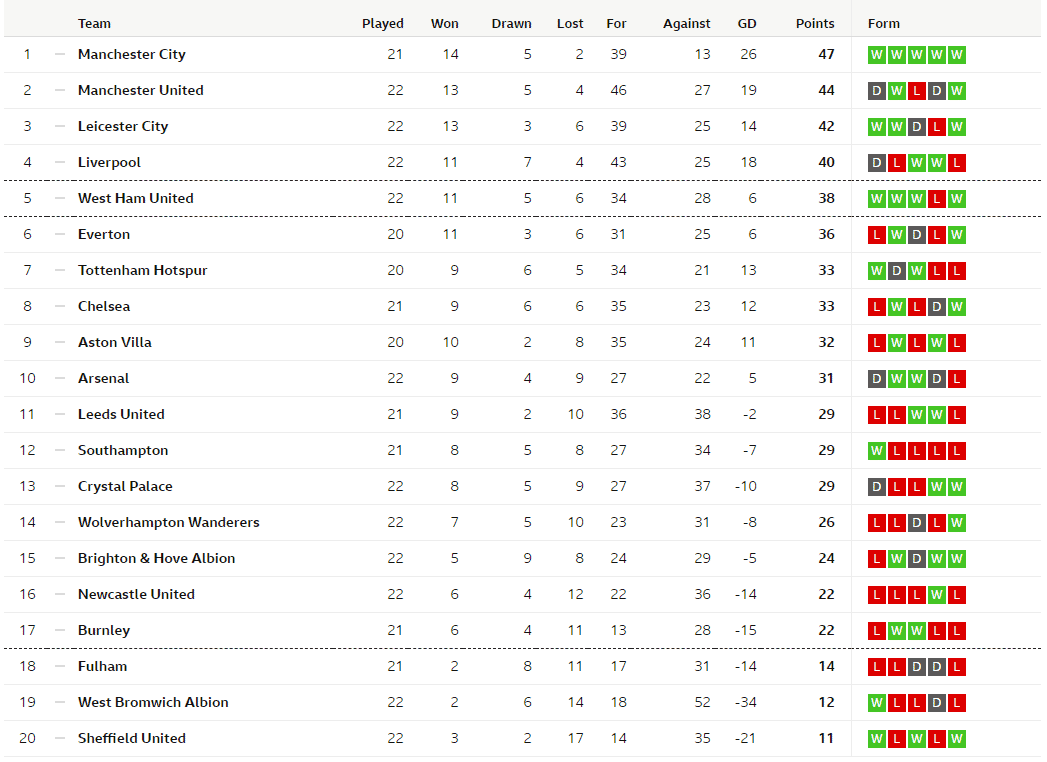 City has a three-point lead at the top once again, and know that if they beat Liverpool at Anfield on Sunday will almost rule them out of the title race as with a ten-point cushion to them, it would be unlikely for City to see that gap disappear. West Ham are now just two points behind Liverpool now after they claimed a brilliant win and Liverpool lost, whilst Brighton’s shock win at Anfield sees them up to 15th and ten points above the drop zone, meaning it’s a bad night for the bottom three as the gap to Burnley in 17th is now eight points. Leicester and Everton also improve their positions after bouncing back from poor losses at the weekend.

Thursday evening sees Spurs hosts Chelsea in the final mid-week game this time around, you feel it is a big one for the hosts who need to put in some kind of performance after losses to Liverpool and Brighton, but Chelsea under Thomas Tuchel looked good against Burnley so will want to heap more misery on their bitter rivals.  Should be a good one!!! 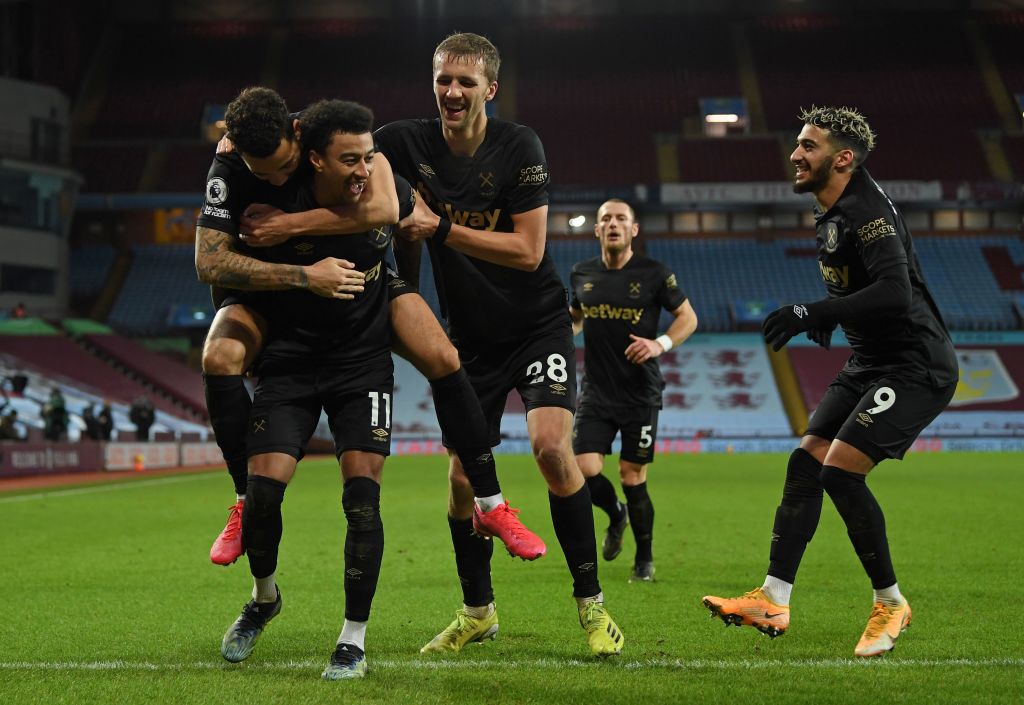