Thursday Night Football featured the top two teams of the AFC South battling it out for the first place. Many experts, including the team that hosts TNF, were bullish on the Tennessee Titans and their offensive weapons, reflecting it in their pre-game predictions.

They could not have been more wrong. The Indianapolis Colts came into Tennessee and defeated the Titans 34-17.

So how did it all go wrong? On their first drive of the second half, the Titans took over on their own one-yard line. Their defense had just made a beautiful goal-line stand and the offense was ready to expand on their 17-13 lead.

The drive started off right for the home team with 19 yards from Derrick Henry on the first three plays. That was the beginning of the end.

On the very next play, the Titans attempted to rush right up the middle, running into the heart of the Colts defense. Their defensive tackles, Deforest Buckner and Denico Autry, stopped the run for no gain, forcing what turned out to be a key third downplay.

On this third down, Autry raced in again, this time putting down Titan’s quarterback Ryan Tannehill for a ten-yard loss. The Titans were forced to punt from their own ten-yard line.

A shanked punt compounded with the great defensive series led to a short field for the Colts. They took advantage of it quickly as Nyheim Hines punched it in for a touchdown and a 20-17 Indianapolis lead.

The Tennessee offense reclaimed the field, needing to respond to the Colts first lead of the game. Pressure from the Indy from four led to an incomplete on first. On the second, Buckner and Autry clogged the center of the line forcing Henry to bounce outside for just a one-yard gain.

Once again, the Titans were faced with a pivotal third downplay. This time Buckner came barreling through, forcing a quick, incomplete pass.

The Titans punted from deep in their territory again, and this time the result was much worse. The punt was blocked by EJ Speed and returned by TJ Carrie for a Colts touchdown and 27-17 lead. The Titans horrendous punting unit had now put Indianapolis in complete control. Or so the narrative goes.

When I look at this game, however, I don’t see the Titans special teams losing them the contest. I see the Colts defense, especially Buckner and Autry, winning the game. Early on and throughout, the Colts defensive tackles clogged up the center portion of the line forcing much of the Titans rushing attack to come off tackle.

In the second half, both DT sent a lot of pressure up the middle at the quarterback. On the plays they were blocked, they put their teammates in advantageous positions.

Deforest Buckner and Denico Autry combined for 9 tackles and a sack. Their presence, however, opened the doors for the other star players on the Colts defense, including Darius Leonard, Bobby Okereke and Xavier Rhodes.

This Colts defense has proven to be an elite group throughout this season, and it all starts with the two large guys applying pressure up the middle. 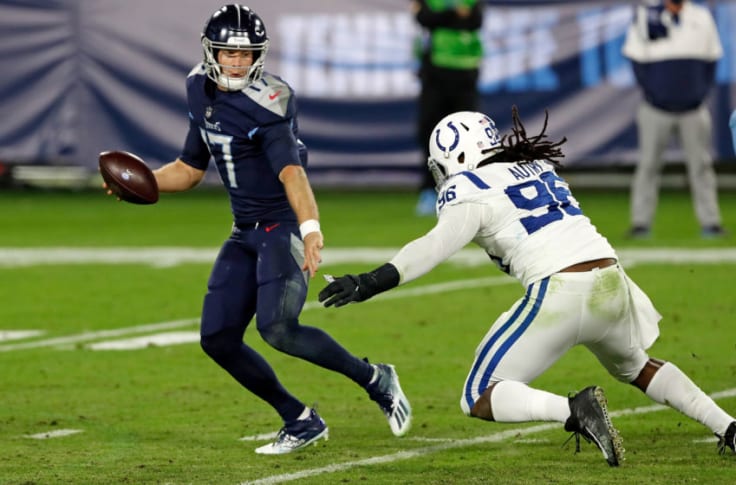