Giovanni Bernard totaled 97 all-purpose yards and scored twice, as the opportunistic Bengals shocked the football world, with a huge and significant upset over their divisional rival. Meanwhile, the Steelers have now dropped three straight, since winning their first eleven games of the season.

Cincinnati’s rushing attack gained 152 yards and punched in a couple of touchdowns. Bernard had one of the two rushing scores while quarterback Ryan Finley ran for the other. Finley had 47 rushing and 89 passing yards, accounting for two scores.

The game started with the two teams trading three and outs on the first four series, then Pittsburgh took over the ball for the third time. On the very first play of that drive, Josh Bynes came racing through and scooped up a Big Ben fumble, to give the Bengals the ball just 19 yards away from a score. Though Cincinnati did not cross the goal-line they did break the scoreless game with a field goal. They also set the tone for the rest of the game.

Pittsburgh’s next possession was more of the same, as pressure from the Bengal’s front defenders force another three and out. After that, their debacle continued. On third and seven, the Steelers complete a pass, just to have Vonn Bell punch it lose and Jordan Evans recover it.

The Bengals went to work just 38 yards away from a score, and this time they completed the journey. Bernard scored his first of two with a four-yard touchdown run. Cincinnati had taken advantage of Pittsburgh’s struggles again and would continue to do so throughout the rest of the game.

The Cincy D was relentless, as they turned over the Steelers three times and tackled them for a loss on six different plays. The most fascinating stat was that they held Pitts’ offense to four plays or less on ten of their drives. The Bengals held them to just 257 yards on the game and only allowed the Steelers to go on two drives.

With the loss, Pittsburgh fell to third in the AFC playoff picture. Their hopes of the one seed are now all but out of reach and the Browns have now clawed their way back into the divisional race. The Steelers will be going to the playoffs regardless, but their seeding took a serious hit. The Bengals remain irrelevant to the playoff picture, outside of the role of spoiler.

The Bengals thwarted the Steelers with a 27-17 victory

Baker Mayfield threw for 297 and a pair of scores, as Cleveland engineered three long scoring drives, and dictated the pace of the game. The two teams went on one long drive after another, as the Browns only had the ball seven times and the Giants eight. Both drove the ball, both ate the clock, the Browns maximized their opportunities and the Giants did not.

The tone was set early in this one when on their first three possessions New York made three trips into the red zone. Those three trips led to a measly three points, as a result of the team foregoing field goal attempts in favor of trying to convert on fourth down.

Cleveland, however, wasted very little on their drives. The Browns did lose their opening drive to a turnover on downs, but punched it in on their second opportunity. They drove 75 yards, in 13 plays, in just under seven minutes. Mayfield capped the drive off with his first TD, a two-yard strike to Austin Hooper. Hooper caught five balls in total, for 41 yards and this score.

At this point, New York finished their disappointing third drive, surrendering the ball just five yards from the end zone. The Browns went back to work, 95 yards away from a touchdown. Ten plays and five minutes later, Mayfield threw his second, two-yard touchdown pass, this one to Jarvis Landry. Cleveland went ahead 13-3 and was never really threatened the rest of the game.

Landry and Hollywood Higgins led on all receivers with seven receptions and 76 yards respectively. In the running game, Nick Chubb totaled 66 yards and scored the team’s third touchdown.

For the defense, Olivier Vernon applied constant pressure all game and had a tackle for a loss. Myles Garrett and Larry Ogunjobi came through late with a sack, ending the Giant’s final drive.

This win kept the Browns in the thick of the AFC playoff hunt as the top wild card, one game out of the Steelers in the AFC North. With the loss, the Giants fall a game behind the Washington team to third in the NFC East. They have no chance at a wild card.

The Browns suppress the Giants, 20-6 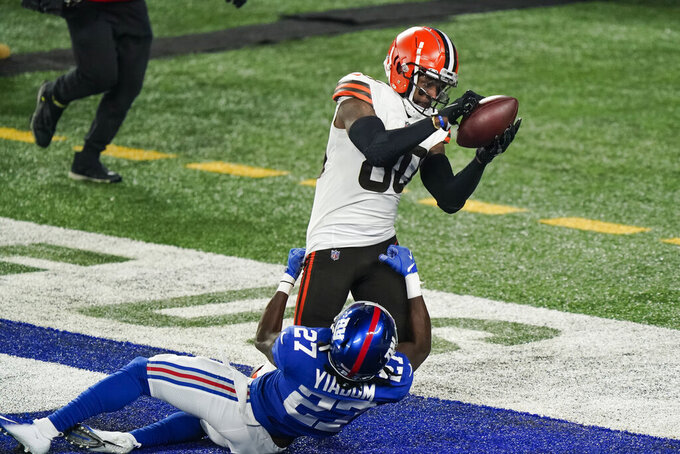