This has not, by almost any quantifiable measure, been one of the ‘Great’ modern Lions test series. Brilliant as it has been to see that resplendent jersey once again donned by the pride of the northern hemisphere’s rugby personnel, it has not been one for the ages. In four years’ time, memories of ‘Lions 2021’ will be coloured by controversial refereeing decisions, the ongoing disruption of COVID-19 and the forever-immortalised rant of Rassie Erasmus laying into the first test’s TMOs.

Aside from a few flashes of brilliance and rare moments of quality, the rugby itself will likely feature at the bottom of the list of reasons for recounting a series that saw the South Africans overcome the Lions 2-1.

It might not have been the series many of us had hoped for, and the result from a Lions perspective is agonising in its tightness, but all credit must go to this South African outfit for cementing their place as one of the great test sides.

For the final time, let’s look back at what can we learn from the Boks’ victory against the Lions in the third test, and what can be gleaned from a series that has sometimes shocked, often frustrated and very, very occasionally thrilled?

For all of the changes that Gatland made to his starting XV for the final test, it was the one he seemed most reluctant to make which truly defined how the tourists ended up playing.

Regardless of whether or not Gatland would’ve liked to have seen Finn Russell introduced so early following an injury to Dan Biggar, the impact was immediate. What a difference a single man can make.

Finn Russell is phenomenal because, for better or for worse, he completely changes how a game of rugby is played. Biggar is proactive, controlling ten, a man who likes to place probing kicks, dictate the agenda at the set play and use his boot to control a game. In this sense, Biggar is a bandleader or a great conductor, dictating pace, tempo and structure if he is allowed to do so.

Russell, meanwhile, is almost the complete opposite, less of a classically-trained musician and more of a lead guitar virtuoso who riffs and shreds to the music inside his own brain. Russell is reactive, playing on instinct and feel, always doing the thing that comes into his head first and leaving no gap between thought and action. It was this genuine level of maverick lunacy that so nearly toppled the Boks.

The Scottish ten transformed how the Lions attacked, and when combined with Ali Price’s electrically charged distribution from the scrum, the tourists were finally able to exert not only attacking pressure but tangible forward momentum.

Russell’s creativity opened the game up in a way that we simply hadn’t thought possible when watching the first two tests. Russell is remarkable because he creates the one thing a defence at all costs doesn’t want to contend with; uncertainty.

From the delays in his passing, the constant disguising of the ball to the ever-shifting focal point of his attacks, the Boks simply didn’t know what the Scot had up his sleeve, meaning that they often dropped off, hesitated or simply capitulated altogether, finally allowing the Lions some precious forward momentum as gleeful Lions runners punched some sizeable holes.

This creative spark permitted the Lions to exploit the slightest fraction of the disrupted, open field of which they had been so long deprived, a beautiful sequence of tipped passes and neat offloads among the forwards only possible once the tourists had broken a defensive structure which had just started to evidence a few doglegs and misplaced links.

Those flashy sequences of play are the easy part. The hard part is facilitating the conditions under which they may become possible, and it was Russell who acted as the catalyst.

The creativity was contagious and it spread across the backline. Tour standout Robbie Henshaw’s decision not to continue a run down the long side of the attack but instead trackback, circumnavigate the breakdown and switch the point of attack to the short side, something which resulted in an overload which nearly put the Lions into score, typified a side who were starting to thrive on the forward momentum injected by their inspired Scottish 9/10 pairing.

Result aside, it’s worth reiterating that it was Morne Steyn, the man who kicked the Boks to victory against the Lions in Pretoria in 2009, who, at the age of 37, came back into the green and gold fold to once again kicking the three points which broke travelling hearts all over again. Every man in the home nations wished then that Steyn had just done the decent thing and retired years ago.

Iconic as that moment is sure to become, some would justifiably argue that such a pivotal instant needn’t have been pivotal at all. Did the Lions simply blow their chances to put the Boks away?

The Williams pass immediately comes to mind as a huge missed opportunity, but so many elements go into shaping a win, and indeed a loss. Tom Curry’s interference in a driving maul might have cost the Lions a nailed-on try, while a late kick to the corner in search of the full seven denied the Lions precious points.

Then there was the controversial decision leading to the Kolbe try as to whether or not there was a knock-on in the build-up, as well as a huge call in ruling Hershel Jantjies’ bizarre last-minute tap and go to have not been taken at the mark. ‘He’s saved them, The ref has saved them’ groaned an incredulous Will Greenwood in the commentary booth. Back they came for the three-point kick, through it went, the game was all but over.

Warren Gatland made wholesale changes from the side that had struggled so acutely during the second test, and while the result didn’t go the New Zealander’s way, Saturday’s outfit often looked like the most complete, cohesive unit of all three test outings, even if not every call ended up paying dividends.

Finn Russell, as we’ve seen, was exceptional at ten, although Gatland can’t take full credit for the performance of a player which he likely wouldn’t have introduced in normal circumstances until the second half.

Ali Price was excellent as an attacking threat from the base, Hooker Ken Owens justified his selection with a try, prop Wyn Jones was (relatively) solid from the scrum, while centre Bundee Aki was exactly the sort of physical presence Gatland needed to deal with the masters of brutal, no-nonsense rugby.

Although not an ‘introduction’, Duhan van der Merwe’s third test selection felt vindicated this time around; the South African Scot was much improved when there was a little more open grass into which to stampede.

Josh Adams struggled for involvement out on the wing, although as we’ll see, he’ll feel he should’ve had a try in the first half, while Sam Simmonds was never quite afforded the chance to make an impact. Adam Beard, a replacement for Lions legend Alun Wyn Jones, couldn’t truly influence the game either.

Poor old Liam Williams. As an Englishman, I have the utmost respect for a man who is the rugby equivalent of an octopus bred with a baby giraffe, but it simply wasn’t the Welshman’s day.

Williams missed a massive 2-on-1 chance to put Adams away down the right and really should’ve done better for the mercurial Cheslin Kolbe’s try. At least he had a decent game under the high ball. Would Hogg, Daly or Watson have struggled as much for the Kolbe effort? Possibly? Would they have made that pass to Adams? I think so.

For all the talk of the Lions having lost the series rather than the Boks really having gone out and won it, take nothing away from the South Africans. They surely have earned the title of greatest test side in the world right now.

What has been so impressive about the South Africans is that they have so few discernible weaknesses and so may strengths; pace, physicality, intelligence, nous, guile, determination and guts to spare, the Boks, like the All Blacks at their mid-2010s peak, find a way to win even when victory shouldn’t be theirs by right to take.

Yes, the South Africans have some individual superstars like Kolbe and Etzebeth, but their cohesive, collective strength is what makes them the ultimate in test rugby. They play a suffocating, exhausting, dispiriting brand of rugby, sapping and smothering their opponents, dictating momentum and forcing teams to play the Boks’ game rather than allowing sides to impose their own will.

The Boks’ defining attribute is the one that is so elusive when a team is struggling yet so intangibly instrumental when they’re on top. They have mastered the one truly important skill in sport. They know, above all else, how to win.

Lions tours don’t come around all that often. To be selected just once is a remarkable achievement and one of the defining moments in any eligible player’s career. All of the Lions should be proud that they even made it onto the plane.

To be selected for four separate tours, however, is a truly astonishing feat. Titan of the game Alun Wyn Jones didn’t get the result he would’ve desperately craved, but coming back from a dislocated shoulder to play in all three series tests is nothing sort of miraculous.

If AWJ is saying his final goodbye to the famous red jersey, his legacy as an all-time great is secure. Alun Wyn Jones, we salute you! 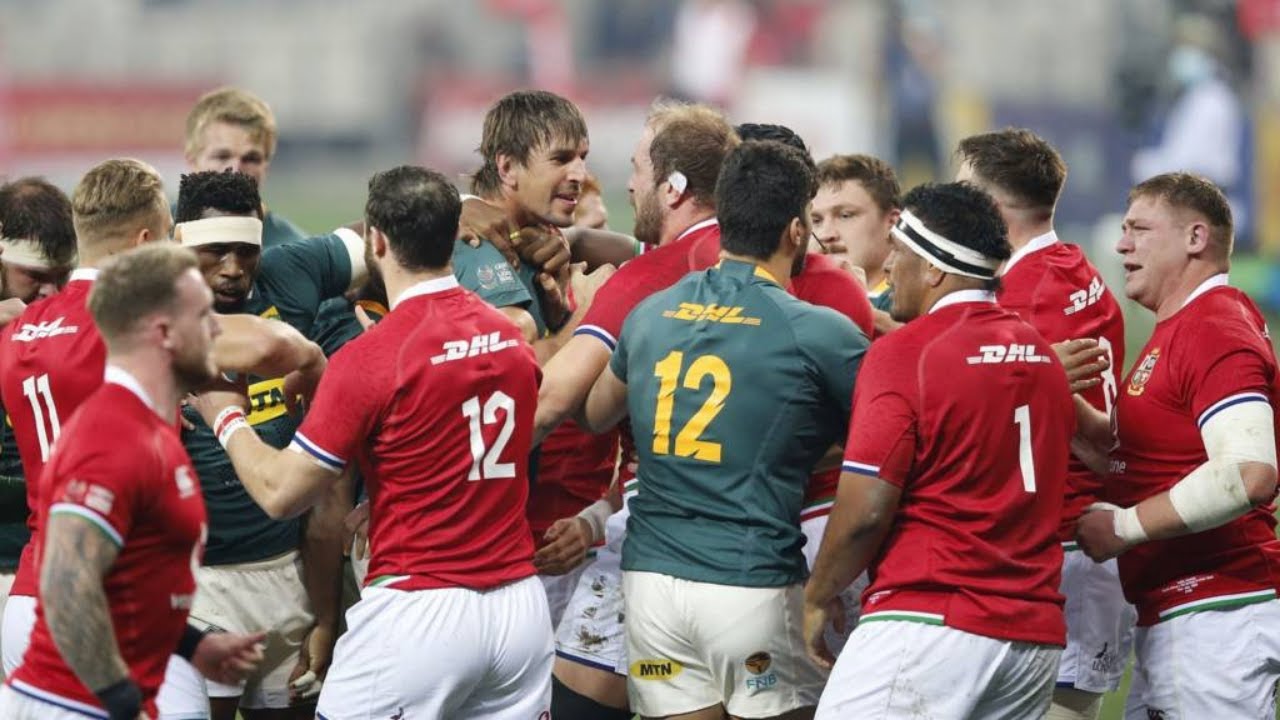