Another weekend, another calamity. After a much anticipated great race at the legendary Suzuka circuit, we were all treated with another unexplainable reason why the FIA postponed the race for such time at the Japanese Grand Prix.

It has been brought to many fans’ attention that the FIA has started to take the safety precautions to another level and now it is beginning to look like any race that has wet weather involved will trigger a red flag to come out and everyone will have to wait until the conditions are supposedly “acceptable to race in”.

However, the majority of F1 fans can agree that wet-weather racing is a massive part of Formula 1, it has an enormous impact on the teams and can bring the field together. As well as that, drivers who are perhaps in a slower car, can qualify or finish higher up on the grid due to their individual skill in the rain.

If the FIA is to continue these shenanigans about the rain, we should start to expect a red flag or a race postponement every time we see rain on the track, therefore removing the wet weather racing element from the sport. Something has to change!!

Despite the lack of racing, we still managed to see a couple of sublime overtakes, one of which came from the flying dutchman at lights out. Max Verstappen started on the front row alongside Charles Leclerc who had qualified second, with his teammate Carlos Sainz behind him in P3.

ALSO READ:  F1 on Film: F1’s Memorable Moments that Should Be Adapted

Verstappen had gotten a bad getaway which had led to a brief moment of Leclerc taking the lead, however, Max aggressively decided to come back at Leclerc which saw them go side by side into the first corner and with Max hanging it around the outside he’d taken the lead back by the time of Turn 3 coming around.

As well as Max’s heroics into Turn 1, a surprising trick from Lance Stroll had gained him 7 positions before the Saftey car had been brought out on Lap 2, Lance had seen at the beginning of the race that the right side of the race track was a lot drier and had more grip in comparison to the other parts of the start-finish straight. This saw him sore a couple of positions at the start of the race, narrowly missing the wall yet despite how close he got, he ended up benefiting massively due to the risk.

During the second and third laps, Carlos Sainz had an accident at the beginning which saw him sliding into the barriers, breaking his rear wing in the process, this triggered what was initially a safety car which a lap later was then upgraded to a red flag.

When the safety car was initially called out, Pierre Gasly had to change his front wing in the pits due to collecting a Rolex advertising board that had come off due to Sainz’s spin.

At this moment in time, we weren’t sure that the red flag was going to be brought out so Gasly, as anyone would, had to catch up to the field so he wouldn’t be left behind.

As Gasly was catching, he at speed had gone past a vehicle crane which could’ve been a complete calamity. We saw at this track 8 years ago that Jules Bianchi crashed into one of the cranes which sadly caused F1’s most recent casualty, with his passing came the introduction of the virtual safety car as well as the Halo which has saved many many lives since.

However, it is apparent that the FIA sometimes doesn’t want to follow its own ruling, and with the decision that they made at the beginning of the race, they had put Pierre Gasly at complete risk of an accident. Fortunately, no accident had occurred but IF something was to happen the FIA would’ve taken all the blame.

We cannot ever risk something like that in the sport again, with the rain pouring down, visibility low, and a couple of cars acquaplaning. Putting another vehicle on track in the dry conditions is already bad but in the wet, it is absolutely ludicrous.

Suzuka is one of the greatest tracks of all time, 13 World Championships have been taken at this circuit and it has been a race that has been driven by the greats in the sport.

Unfortunately, this time round the weather had caused massive delays yet it also set up for brilliant wet weather racing conditions, many people had taken the gamble with pitting on to intermediate tires earlier on.

We will see this race again next year, hopefully with more racing laps next season but nevertheless a brilliant race of what we had.

Let us know your thoughts on the race down below in the comments section! 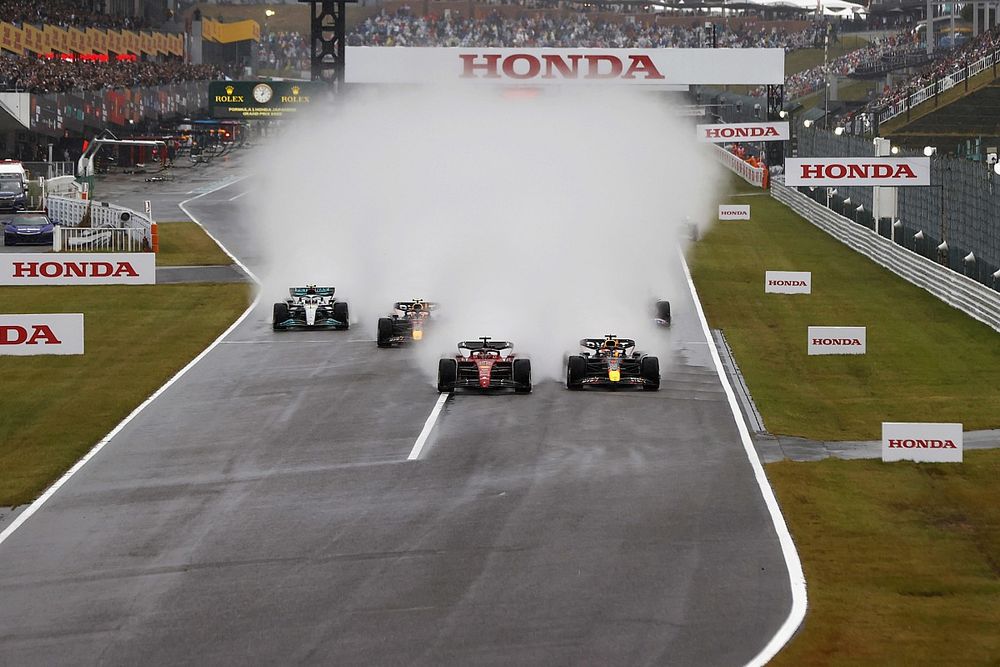