Just like last year we had a weather affected race and saw 2 of the 3 practice sessions dry with a half-and-half qualifying and a full intermediate race.

The Turkish GP saw Bottas leading from lap 1 and only being challenged by having to overtake a worn-out Leclerc who hadn’t pitted and had old intermediate tyres, he managed to fend off a raging Max Verstappen who was eager to challange for the win however, Valtteri’s pace this week was no match for him.

This was a weekend where Valtteri demonstrated to the world what skill he has and that he does have the skill to compete at this level. He qualified Second Place which then turned into Pole due to Hamilton’s penalty and was the lead car this weekend, with him having the ability of deciding when to pit and controlling his own race, he managed to bring the win and the fastest lap for Mercedes.

As Bottas got 26 points this weekend I’m sure Mercedes will be overly grateful with this as it helps them extend their lead in the Constructors Championship.

McLaren Have A Weekend To Forget

McLaren had a weekend to forget at the Turkish GP, Lando Norris managed to come home with a nimble 6 points and Ricciardo had an even more miserable weekend with finishing 13th.

The only positive to look at would be that Daniel took new engine components which saw him start at the back of the grid, the only positive being that they won’t have to take a penalty later on in the season whereas their competitors will.

Both McLaren drivers before the race did say that this week they would struggle massively as the car didn’t suit the track and it was even worse in wet weather conditions, unfortunately it is fair to say that the past two weekends for McLaren has been misery and they are waiting to pounce back with some good points.

Fortunately, the next race in the USA does in-fact suit the McLaren, and with long straights and fast corners we could potentially see them rise back up to the podium positions or just miss out and be the best of the rest.

With the Ferrari’s new engine in place they look like a completely different car, at the beginning we saw that they were behind the McLaren’s in terms of car performance however with the new engine it looks like they’ve matched them if not beaten them.

This was demonstrated to us today with Charles Leclerc’s resilient drive and Carlos Sainz making his way through the field. Sainz decided to take a grid penalty for this week which Ferrari then later said they regretted as the car was easily good enough to qualify Top 5 and potentially had the race pace to get a podium.

Charles Leclerc got so close to a podium last year and the same with this year! managing to finish 4th fending off Lewis Hamilton, however, he wasn’t able to defend the Red Bull of Sergio Perez which therefore saw him losing out on 3rd. Leclerc was actually leading the race for a period of time as he got the idea of deciding he could go the whole race on the same intermediates yet the tyre-ware caught up to him and he decided to pit.

Sainz on the other hand was not trying for the Podium and was trying to get the best damage limitation as possible which he succeeded in, as fighting from P20 on the grid and getting himself up to 8th claiming 4 points to his name.

Ferrari during their weekend managed to rack up 16 points which will massively help them in their quest to claim 3rd in the Constructors Championship.

Red Bull managed to get their first double podium since France earlier this year, Max was expected to get a podium as starting second on the grid he had huge hope for a good result, however, Sergio Perez only claimed 7th on the grid in qualifying which was then moved up to 6th due to Hamiltons Penalty.

After the Lap 1 chaos, Perez found himself in 4th place due to Gasly having a collision with Alonso which saw him spin out and he was then invited down the inside which saw him get past Gasly.

Sergio had decided to preserve his tyres at the beginning of the race which put him in a good position when it came to defending Hamilton. Perez would’ve had to do his best to hold up Hamilton as Red Bull wouldn’t have wanted Lewis to charge down Max. This led us to be treated with the best racing of the weekend which saw both drivers go wheel to wheel for multiple corners until Perez managed to edge ahead and keep Hamilton at bay.

With a good strategy call from Perez, they decided to pit early and get the intermediates up to speed which allowed them, later on, to overtake Leclerc and claim 3rd spot on the podium.

He brought home 15 points which have kept Red Bull’s dream of winning the Constructors alive and Perez fighting for 4th place in the drivers’ championship. 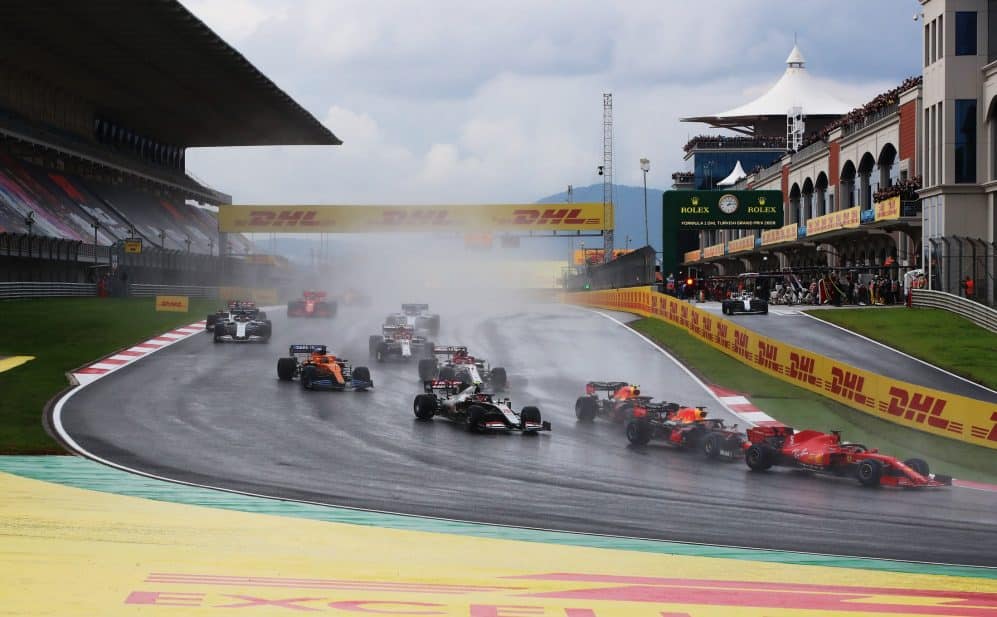