To be first in most leagues is a fantastic achievement, something to be proud of and to hold on to until another team replaces you at the top of the pile. However, in the world of Scottish football, as always the circumstances differ to most.

Steven Gerrard’s Rangers sit top of the Scottish Premiership, clear of second-place by two points yet after a draw to Aberdeen at Ibrox, fans of the Gers continue to be frustrated with their start to the season. To put this possibly outlandish situation into context we have to look at last season. Rangers ended the 38 game campaign with 102 points, 25 clear of second-place Celtic who imploded in what was supposed to be the heavily anticipated 10 in a row season.

Gerrard led his troops to an invincible season consisting of 32 wins and a 100% record at Ibrox. Additionally due to the collapse of last year, Celtic have had to do an immense rebuilding job because of what will become an unforgettably disastrous season. The Hoops have had to go through managerial and board room changes whilst completely revamping the squad and losing their season opener to Hearts yet they are currently catching up to Rangers on form better than the Ibrox club.

Due to this when Rangers have already dropped six points at Ibrox in the space of 11 games you can understand the disappointment within a large number of fans. So what has differed this time around from the miraculous 20/21 campaign?

During the summer window Rangers made four signings, three of which were free in Fashion Sakala, John Lundstram and Nmandi Ofoborh with the other being a £2.3 million deal for versatile midfielder Juninho Bacuna. We have seen three of those players in action however Ofoborh has been yet to feature due to an undetected heart issue being found in the summer.

Bacuna has been played in cameos and is still waiting for his first run of fixtures. The former Huddersfield man has looked technically quite gifted in spells of games but to give a true verdict on how he’ll do north of the border would be unfair now considering his lack of opportunities from the boss.

John Lundstram has already played out a wide variety of performances in his Rangers career. The Scouse-born under 21 international started his time in Glasgow slowly with a red card against Alashkert and sluggish performances domestically. However, it seemed Lundstram hit a turning point with his arguably man-of-the-match performances against Hearts, Hibs and Dundee. The 27-year-old has slightly dipped in the form shown a few matches ago in very recent fixtures but still looks to be key this campaign.

Mixed is the word I’d use to describe Fashion Sakala’s time in blue so far. The Zambian is always a willing runner and works hard, utilising his pace to chase down every ball played over the top however his end product has been questionable at times. Sakala isn’t a striker who will create with only 0.4 key passes per game so needs to be scoring to be pulling his weight in that team. Despite a very promising friendly performance where the Zambian tore apart the Real Madrid defence Sakala has only done so once in competitive action. He is also the most dispossessed player at the club per game (1.3) behind Joe Aribo who often plays in a heavily congested midfield. Fashion Sakala has been okay but I feel there is more to see from the electric forward.

Rangers have come into this season with a thinner squad than last, letting go of; Jamie Murphy, Greg Stewart and Jamie Barjonas on a free, George Edmundson for £875k and Jordan Jones for an unknown fee. Jake Hastie and Glenn Middleton on loan were among other departures. None of these previously mentioned names were seen to have much of a future this season however two of the players who left were fairly controversial.

One of the two deadline day departures was big forward Cedric Itten. The Swiss striker featured as a squad player last season and picked up some key goals in the title-clinching campaign. Gerrard has since loaned him out to struggling Bundesliga side Greuther Furth and has been missed at certain points this season. Rangers hit over 20 shots in both their draws with Motherwell and Hearts. Itten, who has previously proved he knows where the net is at crucial moments may well have changed both outcomes.

The other player who left at the climax of the window was Croatian centre-back, Nikola Katic. Having missed the whole of last season through injury it is understandable why Rangers let him get some game time on loan in Croatia with Hajduk Split however the 25-year-old hasn’t been replaced. Now with Filip Helander out with an injury, the main cover is Jack Simpson- a player who many feel is defensively weaker than Katic. Another injury to that backline could cause major problems meaning the loan of Niko Katic was possibly reckless on the board’s part.

Rangers started their domestic campaign well with a 3-0 cruising win over Livingston. This game especially after the previously mentioned Real Madrid one really didn’t give much room for negativity around the club. However, following the Livi game Rangers played Malmo in a Champions League Qualifier. This game meant a lot. The iconic UCL music hadn’t been heard in over a decade at Ibrox and to finally get that opportunity to play with the best would’ve really signified how much Gerrard and co had done for the club. Unfortunately for Gers fans, they know more than anyone else that when it comes to Rangers Football Club not everything goes to plan. Rangers lost 2-1 in both legs against Malmo with a disastrous three minutes of football in Sweden leading to both Malmo goals in the first leg and a shocking second-half display in the home tie sealing their fate.

Sandwiched in between the Malmo first and return leg was a game that potentially influenced the Ibrox encounter with the Swedes. Rangers went to Tannadice with a win over Dundee United. Tam Courts, a fairly inexperienced manager was let down by his players the previous week with a flat performance against Aberdeen so unsurprisingly not many gave United a chance. However, against all odds, United dug out an incredible 1-0 win over the team that arrived in Dundee 40 games unbeaten. This is the only loss Rangers have suffered domestically this season however disappointing performances haven’t been a rare sight.

Rangers would thrash bottom Championship side Dunfermline in the cup before grinding out a win over two legs against Alashkert in Europa League Qualifiers, securing their entry to the competition. Depleted spirits following on from the Malmo game would be replenished with a covid-hit Rangers beating Celtic in the Old Firm Derby and then St Johnstone. European performances would continue to let them down though being outclassed by Lyon at Ibrox in a 2-0 defeat. A draw to Motherwell the weekend after was a huge disappointment having taken 24 shots in a 1-1 outcome. The 1-0 win against Dundee the week after really didn’t feel like one having been bailed out by Jon McLaughlin’s penalty save in arguably the worst performance of the season.

Rangers then lost in Prague to Sparta with Glen Kamara being sent off in a 1-0 defeat. Both Edinburgh teams came to Ibrox with the first fixture against Hibs being a 2-1 win for Rangers after going 1-0 behind before a controversial Porteous red card and goals from Roofe and Morelos. The Hearts one was hugely frustrating for Gers fans as numerous chances didn’t get put away before being succumbed to a 1-1 draw after a late McGregor mistake. Rangers’ finally got their European campaign started with a 2-0 win over Brondby, the first game in weeks where the Ibrox side fulfilled their full potential. Last weekend’s win over St Mirren looked like Rangers had hit a turning point but the 2-2 result with Aberdeen in midweek must’ve been a blow for Gerrard with the players yet again not maximising the abilities they showed last season.

What Needs To Improve?

We need to realise that Rangers aren’t in a disastrous situation as they are of course sitting on top of the league. The issue is that the players that were so good last season aren’t reaching the same heights or anywhere near. Rangers are very similar in stats for possession and pass completion compared to last season. They’re still retaining the ball as well but it’s the final third that’s the issue. Last season, Rangers averaged 1.6 goals inside the penalty area per game compared to 1.1 this season showing two things; the final third passes aren’t as precise and the finishing hasn’t been as good.

Against Hearts, Morelos alone hit four shots off target one of which went down as a ‘big chance’ again showing that lack of end product from the star players. At the back, Rangers also haven’t been as good with key players making mistakes you wouldn’t see them making last season. Rangers averaged 13.7 tackles per game last season compared to 12.2 this season showing the lack of urgency to win the ball back. This sluggishness has become very apparent when watching Rangers at times this season. 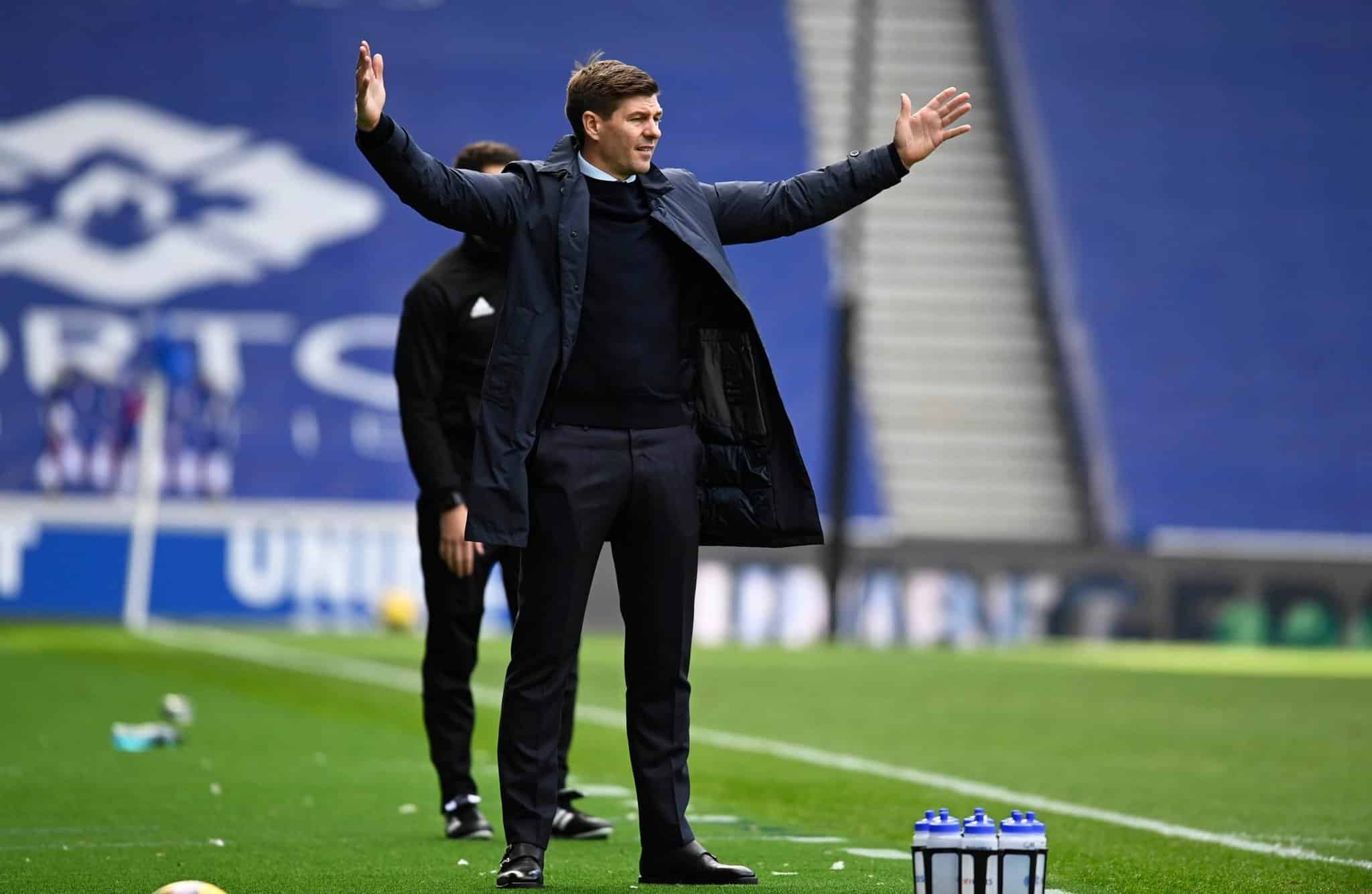