If you’ve seen a few UFC fights, you’ve more than likely had the privilege of having your stomach twisted in knots, as your brain tried to comprehend the explosive craziness you just witnessed. Fighting is an age-old sport. Yeah, we all know this, but what makes the UFC different, and what makes the year 2020 unlike any other?

Besides dealing with a pandemic, killer bugs, insane weather and the overall uncertainty of what tomorrow may bring – the UFC has gifted us weekend after weekend filled with fights. These are not just, one two buckle my shoe, type fights either. These are, let’s get out here and knock your head off (or die trying) type fights.

Now, for the most part, I can say the fighters do a good job delivering this, reconstruction of my facial muscles, but I have noticed, there are others, and even up and coming fighters, who don’t fully realize why the UFC is the number one fight promotion right now and probably for the next five years, at least. (Don’t argue with me on this one.)

The UFC is the Olympics of the mixed martial arts world. To make it to this level, you have to be the best, and now, there is very little room, if any, for a second or third chance to prove your worth to the company. When I watch a fight night or pay per view, I cringe when I see a fight that misses the mark.

I will say this, it takes two to tango, but if you’re partner is lacking, you better do the Cha Cha Slide or something else. Your job is to be the best. I’d be lying if I said I didn’t care to see an engaging fight with both fighters going ham. I recognize, sometimes you have to be the one that does all the work—think Tyson!

In the age of social media, anyone, at any given time, can search a street fight, and I can bet money, they’re going to have you making a “stank-nasty” face. Why? Because, these people are out for blood. It may not last longer than a few minutes, but the impressiveness in those minutes, is why they can easily go viral.

When you get to the Olympic level, just about everything you do should be “viral worthy.” I mean, not only is this your job, but the incentives that come along with an outstanding fight are pretty sweet. If there are five fights on a card, it should be hard to determine who gets fight of the night because they were all just that good.

I’m not saying everyone needs to have these superhuman capabilities where they never tire, they’re not going to ever face someone better and stronger than them or that they may never have an “off day,” but what I am saying is, you have to have an animalistic instinct that showcases itself despite whatever. If you need to regroup, regroup. If you need slow it down a round, do so, but please do not go out there wasting people’s time and crapping on your once in a lifetime opportunity.

The last 30 seconds of a round, you should be taking it up a few notches, and when you hear that wood clack three times—beast mode! This is, if it makes it that far. Everyone has their “super power.” Whether it’s crazy submissions, knock out power, eye pokes, I mean ground and pound… whatever works for you, it needs to be at 95 percent or higher in effectiveness.

My all-time favorite movie scene is from The Karate Kid, starring Ralph Macchio. In the last fight scene, Daniel with a l, is literally on his last leg. He can quit and give up or he can continue to on — laying it all on the mat. The moment comes when he makes a choice to continue on, to dig deep and pull at that “stank-nasty!” Hurt, tired and almost defeated, he hobbles on his good leg, raises his arms, raises his injured leg …and the rest in on the mat.

If he would have lost, it still would be favorite scene. The fact that he, along with Mr. Miyagi, willed himself to go until he couldn’t go anymore, coupled with the most “stank-nastiest” kick you’d ever seen, on an injured person at that… you get my point.

I get so frustrated when I see the corner cams in between rounds and these coaches are like “you’re doing good, go out there, you need a win, come on, blah blah blah.” I’m sorry, but most times, I find myself catching a few z’s during this time. You don’t have to yell, and get inspirational and motivational, but it’d be nice if you yelled and got inspirational and motivational.

I trained at a boxing gym for a few years and there’d be times where I was beat to the tip of my toe nails. My daughter who was around the age of five, would yell at me, “come on mommy, you got this! Don’t give up mommy! Let’s go, you have a little more!” Now, only was her yell intense, but the faces she made, the vein popping out her neck, my girl meant business.

Now, I realize, I have a special and unique child who gets that from me, because that’s how I am; but to see her snap into motivation mode when I needed it the most, it gave me the necessary push to dig deeper, go harder and show out, if for nothing else, because now my baby girl is counting on me. That’s how coaches need to be. Whether it’s a phrase, or a reminder of why you’re here, each round should start with a renewed killer instinct because what was just said, stirred the “stank-nasty” in you.

I understand some people may never get to a point of revealing their “stank-nasty.” I do believe everyone is capable of it though. To be the best, you have to work at being the best, surround yourself with the best, believe you’re the best, and most importantly, never stop working at being the best.

When you see the people that are the best, they all have the “stank-nasty” mentality—Jon Jones, Khabib Nurmagomedov, Georges St-Pierre, Francis Ngannou, Daniel Cormier, Stipe Miocic, Kamaru Usman, Israel Adesanya, Amanda Nunes, Derrick Lewis, Weili Zhang, George Masvidal, Justin Gaethje and Tony Ferguson. There are so many more spectacular, “stank-nasty” fighters out there, but I can’t name them all.

I say all of this to say, if you want to be in the UFC, or are currently in it, either bring your “stank-nasty” game or sit down somewhere. I can bet all my little two dollars, the more “stank-nasty” you get, the more you’ll be worth. I’m just a fight enthusiast and aspiring UFC fighter, so you don’t have to take my word for it. Ask Dana what type of fighter he wants, a “stank-nasty” animal or a nice one. 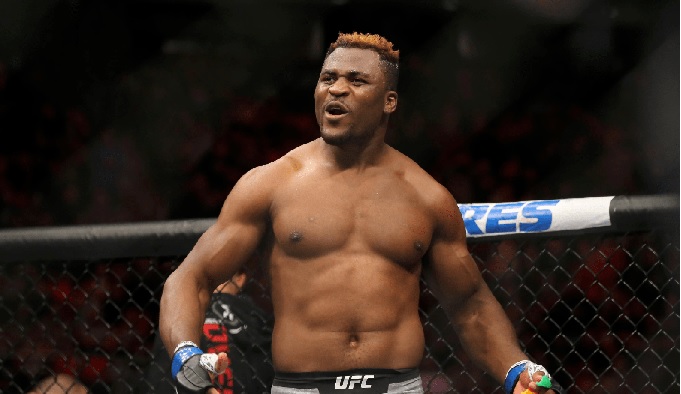