From the opening tip, we all got to see exactly what kind of night it would be for 2015 WNBA MVP Elena Delle Donne and the Washington Mystics. Tonight clearly wasn’t the night for the Mystics, who got dominated by the Seattle Storm in a 89-76 loss. A lack of ball movement and creativity on offense cost them as the Washington Mystics had 13 turnovers and shot a season-low 14.3 percent from three compared to Seattle’s 38.5 percent from beyond the arc.

However, it wasn’t just the team stats that showed why the Mystics lost this game. The starting 5 struggled to get into a rhythm and whether the storm on defense. One player that really struggled in particular was Kristi Toliver. She was only able to put up 5 points and had an abysmal shooting night, going 2-11 from the field and 1-8 from three while struggling to make an impact on the court at the same time. Another player who failed to live up to the high expectations of the WNBA finals was Washington Mystics forward Elena Delle Donne. While she was able to get in double figures and at times, looked like she could start a run did not end up with a double-double or 20 points, something Mystics fans are very used to seeing Delle Donne do throughout the playoffs.

However, after the game Delle Donne refused to blame her knee injury as the reason why her level of play dropped.

“We can talk about my knee after this series,” Delle Donne said. “Excuses are for losers. If I wanted to be 100 percent, I wouldn’t have come back. So I knew coming into this thing I was going to have to figure out a different way to play.” She went on to state that the offense became stagnant as the game went on and believed that better ball movement will help the Mystics in game 2.

What helped the Storm during the game was that the matchup of Natasha Howard against Delle Donne benefited Seattle in the sense that her length made it difficult for Elena to move around like she normally would. This was different compared to how Seattle usually approached Delle Donne as they would usually opt to Breanna Stewart to face the 2015 WNBA

Coach Mike Thibualt seemed to believe that Seattle’s defense was the key to their win tonight.

“They try to keep length on [Delle Donne], and Natasha’s really long. Then when they put [Alysha] Clark on Kristi Toliver, that allows them to do some switching on us and try to keep from creating mismatches in pick-and-roll situations. We’re going to have to find other ways to create mismatches without Clark being involved at the same time.” Coach Thubualt said about the matchups.

“They didn’t do anything that we didn’t anticipate. We just didn’t handle it very well.”

That last quote explains the Washington Mystics and their struggles on both sides of the ball. It also sums up why the Mystics took bad shots from the corner very often instead of moving the ball from side to side. It started when Seattle built the 16-point lead in the first half and ended with the Mystics attempting a late surge when it was too late.

Having said everything, there was one positive that both Mystics coaches and fans will take into account heading into game 2 and that was the production of rookie Ariel Atkins. She had 23 points, shot 10-14 from the field and also had a couple of steals in what was a very tough night for the rest of the team. While tonight’s game wasn’t a winner-take-all, the Washington Mystics have to make sure that they take game 2 on the road. The last thing you would want is to be down 2-0 heading back to DC in an elimination game. Game 2 of the WNBA Finals is Sunday at 3:30 ET and the Washington Mystics will look to take home-court advantage back to the District. 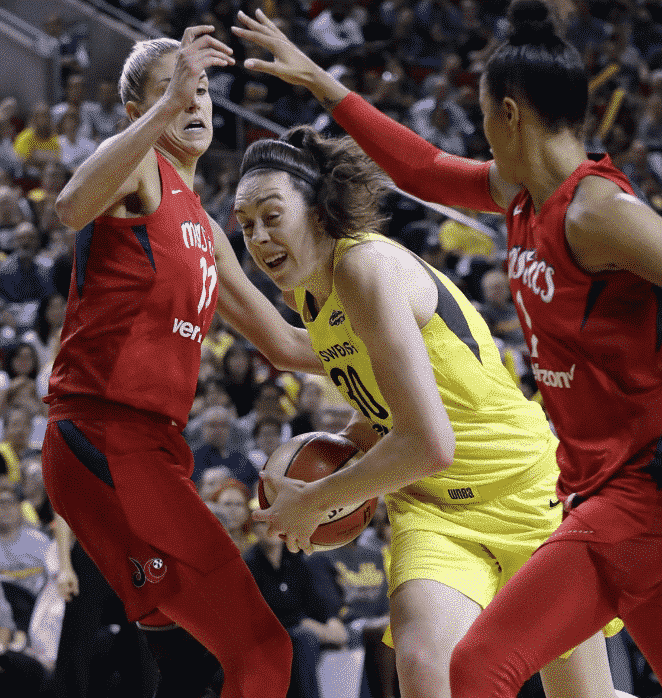