Blackhall Athletic were comfortably beaten 5-1 at home to St Bernard’s, there were returns to the team for Thomas Palmer, Nathan Pearse, Alex Shanks and Louis Thomson, and new signing Finn started in goals. The team once again lined up in a 442 formation, and Nathan Gallagher was handed the captain’s armband.

St Bernard’s started the game positively, and within just minutes their number 9 was sent through clear on goal, but drilled a shot wide of the post. The Blackhall defence was split yet again only a minute later from a goal kick, but goalkeeper Finn was able to get down well to save. Blackhall had Finn to thank yet again after the St Bernard’s number 10 was able to wriggle free of the defence, but saw his shot well saved by the keeper. After a tough opening few minutes, Blackhall finally managed to get a foothold in the game, Zane chased down a defender but his shot was blocked, the rebound fell back to the striker who now had nearly the entire goal at his mercy, but his shot was miraculously headed off the line to deny Blackhall the opening goal. Jamie Campbell won a free kick which was struck by Nathan Gallagher, forcing a good save out of the St Bernard’s keeper, and from the resulting corner Michael saw his ambitious shot fly high and wide of the mark. Just as it looked like Blackhall were beginning to dominate, their defensive problems were shown again, as the St Bernard’s number 10 was able to squeeze past both centre backs, and hit a low, hard shot into the bottom left corner to open the scoring. The away side were through again as Calvin Catala left his man unattended, but was relieved to see the header sail over the bar. Minutes later St Bernard’s had doubled their lead, as the number 10 dispossessed Nathan Pearse, and rocketed a shot from 20 yards out, which Finn was able to get a hand to, but the keeper was unable to prevent the ball from hitting the back of the net, 2-0 to St Bernard’s. St Bernard’s came forward again, but left back Michael did well to intercept and hammer the ball to safety. Nathan Gallagher came forward for Blackhall, and put in a decent cross which no one could connect with. Nathan Pearse then came forward and delivered a ball into the box, but Louis was unable to get a proper connection on the ball.

The game should have been dead and buried before the half hour mark, as the number 9 took the ball beyond Thomas Hedges, but put his shot narrowly wide. Coach Leigh Hedges knew something had to be done to change the way this game was going, and made a quadruple substitution. Louis, Dugald, Michael and Nathan Gallagher were replaced by Fallilou, Brandon, Khadime and Alex Shanks. Blackhall attacked again, but Zane squandered yet another opportunity in front of goal. Joseph Brodie was then brought on for Calvin Catala, who has had better days. The St Bernard’s keeper was forced into a great save when Zane struck well from close range, and from the resulting corner Khadime headed the ball wide and out for a throw in. The defence began to gel again, with Thomas and Thomas both making important interceptions, and heading every ball away to safety. Just as it looked like Blackhall would go in only 2-0 down, number 10 completed a first half hat-trick as he took the ball past Nathan Pearse and fired into the back of the net to give the away team a comfortable 3-0 lead at the end of the first half.

A triple substitution was made at the start of the second half, with Nathan Pearse being replaced by Dugald, Jamie Campbell coming off for Calvin and Nathan Gallagher coming on for Zane. Within minutes of coming on, Nathan was causing problems. The number 7 tried to take the ball round the St Bernard’s number 3, but was left frustrated after being clearly obstructed, and then cautioned by the referee for airing his disappointment at not having a decision go his way. Khadime and Brandon began to link up well, but couldn’t muster any real chances from their interplay. Suddenly Blackhall found themselves in a good position, with the ball being worked to Khadime on the left, but he got his feet muddled up and in turn gave away possession, allowing St Bernard’s to break away, but nothing came of that either. The game was then well and truly put to bed, as the dangerous number 9 for St Bernard’s got himself on the scoresheet, dinking the ball over Finn, and making it 4-0.
Blackhall would still not lie down, and Nathan Gallagher forced a brilliant save out of the away side’s keeper from a free kick that was at least 25 yards out. St Bernard’s pumped the ball forward, but Fallilou was able to deal with the aerial threat, clearing the ball away to safety. Finn then made the best save of the match, as the St Bernard’s striker had the goal gaping, but Finn was able to get back and brilliantly palm the ball to safety. Alex Shanks did his part both defensively and offensively, making sure he was unable to beat, but was then subbed off for Nathan Pearse, also coming off were Fallilou, Khadime and Brandon, who were replaced by Louis, Michael and Zane. Within seconds of these subs being made, the score was 5-0 as the number 7 broke free and rolled the ball past a helpless keeper. It seems that the fifth goal was the one that kicked Blackhall into action, as they suddenly turned on the style with about ten minutes to go. Dugald and Zane combined well, and Zane danced through two defenders, then delivered an inviting cross that was met by Nathan Pearse who tapped in a consolation goal, 5-1. Michael then showed real determination high up the pitch, winning the ball back thrice, Joseph was poking the ball past his opposite parts, and Calvin was stopping everything from getting into the Blackhall half. Zane then won a free kick, and his shot was put out for a corner, from which Louis headed narrowly wide. Although they were 5-1 down, Blackhall ended the game brilliantly, as Nathan Gallagher crashed a shot against the bar, before getting injured and needing to be replaced by Brandon. St Bernard’s came forward and also hit the post in the last action of the game, as the referee blew his whistle for the final time. Full Time. Blackhall Athletic 1 – 5 St Bernard’s. 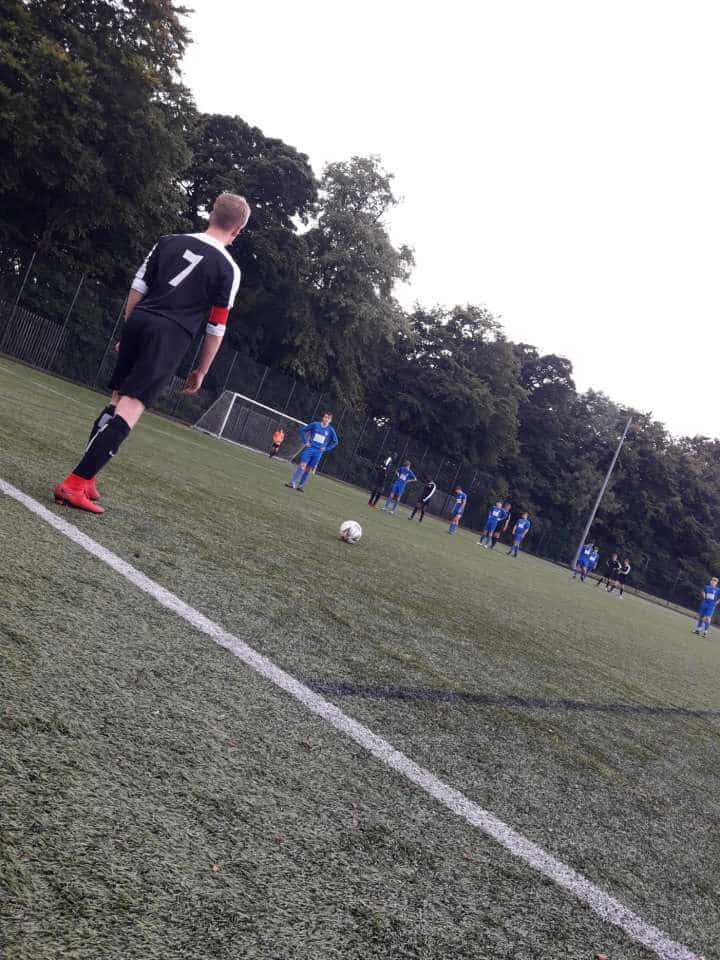