However, with the sloppy and controversial finish, they disappointed a lot of fans. What could have been a history-making win for Carmella is now being vigorously debated as to whether she is the actual winner or not?

When SmackDown Live Commissioner, Shane McMahon announced the first-ever Women’s Money in the Bank match scheduled for the namesake pay-per-view among Charlotte, Becky Lynch, Natalya, Tamina and Carmella, fans had plenty of reasons to be excited. The company was making history with the women’s division throughout 2016 with the Charlotte-Sasha Banks rivalry, booking the first-ever women’s Hell in a Cell match which main-evented the namesake pay-per-view and also letting the two main-event Raw for the first time after Trish and Lita had main-evented in 2004.

Now, with SmakDown Live upping the ante, fans had huge expectations from this match. All the wrestlers involved could deliver an excellent bout. As the pay-per-view date drew nearer, booking and spoilers all pointed out towards Carmella as the probable winner. This was not and is still not a bad booking option since the current SmackDown Live Women’s Champion, Naomi is a face. But the manner in which the match was booked let everybody down.

For starters, the duration of the match was 13:20 minutes, less than half the duration of the men’s MITB match (29:45 minutes). Just when things were starting to get thrilling, the match ended abruptly. Additionally, there were no big spots in the match except the one involving Charlotte. This argument can be countered by the fact that fans had way too much expectation from the first-ever women’s MITB match. For a neutral spectator, things may have gone all right.

However, with Charlotte, Becky and Natalya involved, more ladder spots could have been booked. WWE could have booked Tamina as the key person where she could have dominated a significant portion of the match before two or three of the competitors teamed up to take her out of the contest.

But it was the finish that drew controversy among the WWE fans. Towards the end, James Ellsworth climbed the ladder as Carmella was unable to do so, screwed Becky Lynch to retrieve the MITB briefcase and handed it to Carmella. The referees argued over the finish as Carmella was pronounced the winner.

Ellsworth retrieved the briefcase and handed it over to Carmella

This is not the ideal booking choice. This was the first-ever women’s MITB match and a woman deserved to climb up the ladder and retrieve the MITB briefcase. WWE could have made history with that. But just like the Divas Battle Royal at Wrestlemania 25, it was a man who got the spotlight at the end of a historic women’s battle. WWE has now missed two significant events to crown a woman as the winner in a women’s contest. They could have booked this as a false finish before Shane McMahon or Daniel Bryan came out and ordered to restart the bout. Even that would have worked precisely.

Referees argued over the controversial finish

Moreover, Ellsworth could have been involved in the finish in some other capacity; maybe he could have distracted Becky or restrained her to let Carmella retrieve the briefcase. That would have sufficed since Carmella is the heel and the original plot of her winning via shenanigans would still be in place. However, not letting her get involved in the finish was a poor decision.

Some fans may argue that this finish is the reason why everyone is talking more about the women’s MITB match and not about the men’s MITB match, which was, arguably the best MITB match ever with Corbin rightfully winning the bout. However, it is not every day that creating a buzz around a controversial decision works as the ideal booking. In this instance, it simply was not. Had this been the third or fourth women’s MITB match, the controversy would have worked perfectly. But the inaugural bout deserves a woman to climb up the ladder and retrieve the briefcase. It diminishes the value of Carmella’s win now.

It is now WWE’s work to salvage Carmella’s win appropriately to ensure that the ending of the match does not make her credibility decrease in front of the fans. WWE teased a lacklustre cash-in at the pay-per-view when Carmella appeared in the middle of the Lana-Naomi bout for the SD Live Women’s title. That was not the right decision either. Had Carmella came in when both the competitors were down and teased a cash-in, that would have excited the fans more. She just stood there and did not even attempt to distract the bout, not the best of ways to book her.

WWE can now book a Becky Lynch-Carmella/Ellsworth feud where Becky constantly distracts Carmella while she attempts to cash-in her MITB contract. Becky can even go after Ellsworth and have an inter-gender bout in a pay-per-view. WWE can trust her to deliver a spectacular bout with Ellsworth where she avenges her loss. This would also add to the list of history-making matches that WWE has booked its female competitors in during the last two years. Furthermore, Becky can also turn heel since this is another incident where she came very close to winning but was screwed over.

But these booking decisions could still be in place with Carmella retrieving the ultimate prize while Ellsworth distracted Becky rather than having Ellsworth do the work for her. A controversy is not best for business everyday and WWE should learn this lesson. This is not the first time that they have missed out on making a historic moment with its female competitors. A couple of years ahead, WWE will surely lament this decision when they revisit the first-ever women’s Money in the Bank match. 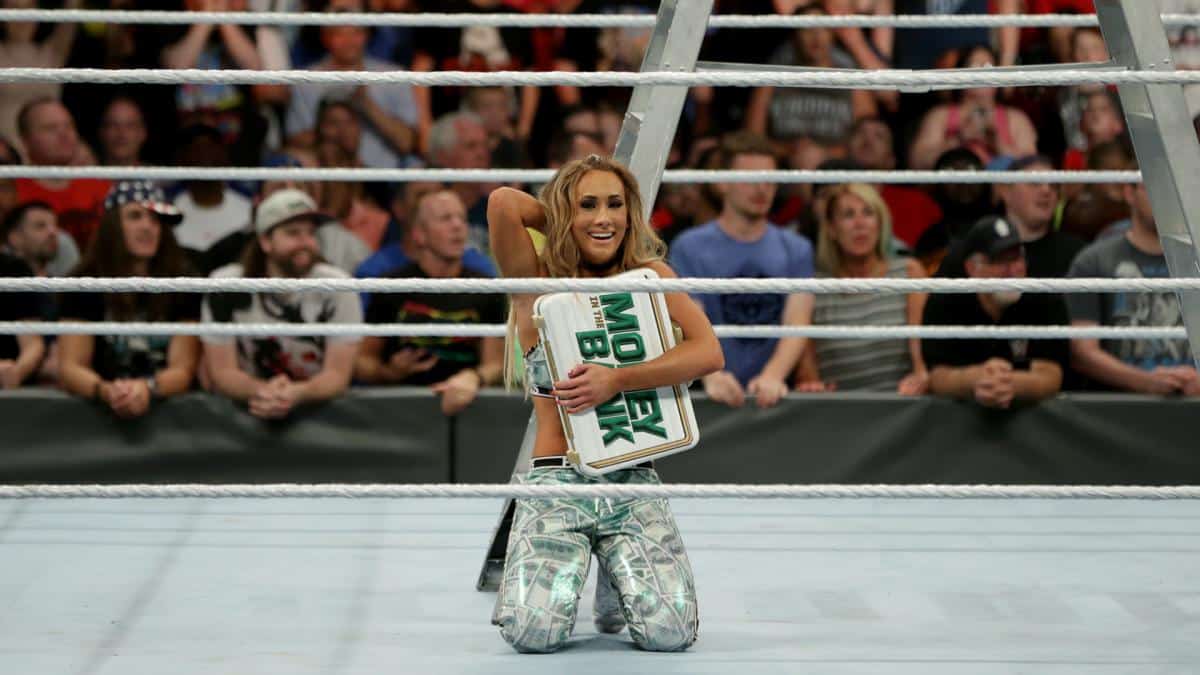