The wait is finally over, basketball fans. Another NBA season is right around the corner this season is going to be chock full of storylines galore from all 30 teams. It’s time to cue up Andy Williams’ “The Most Wonderful Time of the Year” as we take a look at what to expect heading into the 2019-2020 NBA season. We now shift focus into the Western Conference as we take a look at the Northwest Division.

The Minnesota Timberwolves hardly made any impact last season, outside of Derrick Rose making 50 points in a Halloween game against Utah. Andrew Wiggins and Karl-Anthony Towns, despite their star power, could not carry a team that was wayward, aimless, and devoid of any motivation. In the offseason, the Wolves drafted Jarrett Culver from Texas Tech, and acquired Jake Layman, Shabazz Napier, and Jordan Bell.

While drafting Culver was a right move for the Wolves, they’re still a long ways from when they were a playoff viable team two seasons ago. This season won’t fare any better for the Wolves, especially when they are in a ultra-competitive Western Conference. Expect Minnesota to be in the draft lottery in May, perhaps getting a top five pick?

The Oklahoma City Thunder traded Russell Westbrook to Houston for Chris Paul, sending off Paul George to the L.A. Clippers for Danilo Gallinari (pronounced Gal-lin-nar-ree), and downgrading their roster. In the draft, they selected Darius Bazley from Princetown High School.

The Thunder were once a playoff team, but now they have players that will most likely be traded by the  midseason, mainly Paul and Gallinari. OKC will certainly be in rebuilding mode, and they will surely be in the draft lottery for a few years. I’m very certain that Chris Paul wouldn’t want to stick around for a rebuild, when  he can go to a contender.

The Denver Nuggets looked like a surefire Western Conference finalist team, if it weren’t for the Portland Trail Blazers providing a stunning upset over them. During the offseason, the Nuggets took Bol Bol in the draft, after the Miami Heat had drafted him, not to mention that they acquired Jerami Grant (pronounced Jeremy), while also subtracting Trey Lyles and Isaiah Thomas from their roster.

Denver didn’t have much of an offseason to talk about, which could be seen as a good thing and a bad thing: Good, because the Nuggets still have Nikola Jokic (pronounced Yo-kich) as their focal point, and bad, because they’ll have to fight against the top teams of the Western Conference. Denver is certainly a playoff team, that much is true, but where they will be placed among the top eight in that conference remains to be seen. If there is one team that should be viewed as an anomaly in the West, if not the league, it should be the Denver Nuggets.

The Utah Jazz made quite an offseason splash when they acquired Mike Conley from the Memphis Grizzlies and Bojan Bogdanovic (pronounced Bo-john Bog-dan-no-vich) from Indiana, along with Ed Davis and Jeff Green. Though Utah let go of core bench players like Grayson Allen, Raul Neto, Kyle Korver, Jae Crowder, Derrick Favors, and Ricky Rubio, the Jazz still have assets that can help them solidify their spot in the West.

Donovan Mitchell and Rudy Gobert (pronounced Go-bear) will not only continue to elevate their game, but will also be in the talks for being all-stars for the Jazz. There is a lot of buzz about Utah making a deep playoff run, but with much bigger buzz about the Lakers and the Clippers, it would be safe to say that Utah could be a top four of five team in West.

The Portland Trail Blazers shocked everyone when they made the Western Conference Finals last season, only to be swept by the eventual West champion Golden State Warriors. Damian Lillard and CJ McCollum made a big splash of their own during the playoffs, while still playing with a chip on their shoulders, but now they’re looking to take their game to the next level and more.

The Blazers were very busy in the offseason, most notably trading Meyers Leonard to Miami for Hassan Whiteside, and acquiring Kent Bazemore, Pau Gasol (pronounced Gah-sol), and Anthony Tolliver, to name a few. The Blazers look to improve in the West, much like the Utah Jazz. In the highly competitive Western Conference, Portland will have to keep that chip on their shoulder, but only as motivation, if they want to be mentioned in the same light as the L.A. Lakers and the  L.A. Clippers.

The Northwest Division have some competitive teams that look prime to make the playoffs, while a few teams will have to rebuild and continue to build, hopefully in the right direction after a stagnant season. This division will certainly be intriguing to watch.

In the next article, we’ll continue our look at the Western Conference when we look into the Pacific Division. 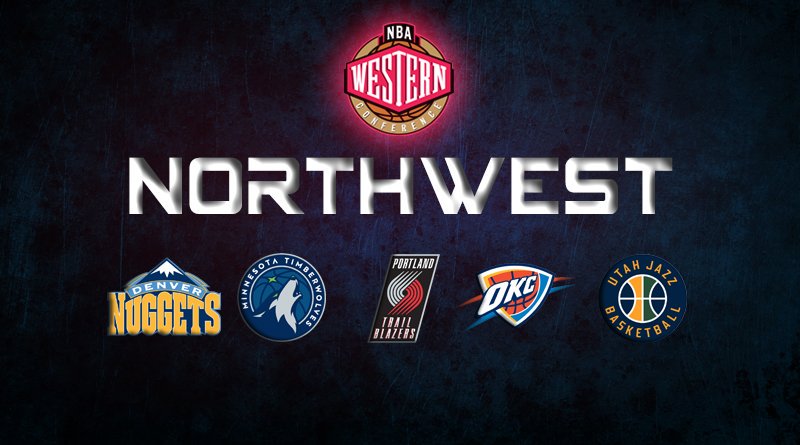