The Six Nations has finally arrived, and unless you’re Welsh, Italian or English, it’s been a great start to what could be a tournament for the ages. Ireland brushed aside a depleted Welsh side to set up an epic clash with a French team coming off the back of a clinical victory against Italy, while Scotland will take huge momentum from their besting of England into a huge clash against Wales at the Millennium Stadium. In a tournament that could go down to a wire, each side will be aware that no defeat is terminal, and that one victory doesn’t make you champion.

Ireland vs. Wales is usually one of the most enjoyable and often underrated fixtures in the Six Nations calendar, a high-quality game played in enviably good spirits between two sides guaranteed to give the other a good run for their money. The Celtic clash is also a tight affair that can often defy absolute prediction: over the last ten years of Six Nations meetings between the two teams, Wales have claimed five wins, Ireland have claimed four, and there has even been a 16-16 draw in 2016 at the Aviva Stadium. This year’s clash, however, felt like a nailed-on cert for the home side before a ball had even been kicked, the eventual 29-7 scoreline just a fraction of what it could have been coming into the game.

The blame can’t really go to the Welsh, however. Much has been talked of their injury problems and the absence of 8 (EIGHT!) British and Irish Lions from their setup, so to even come within around 20 points of an Ireland team riding high on confidence and form should be no true disgrace. If anything, Wales can use this tournament to blood some of their young and exciting talent, ‘future Lion’ (according to Sam Warburton) Taine Basham particularly impressing on a tough day for the men in red. The Welsh defence, however, looked in disarray as Ireland perpetually changed their playbooks, disguising their points of attack with clever wrap around plays and cute passing passages that often left the likes of makeshift centre Josh Adams chasing shadows. Adams’ unnecessary shoulder charge of Jonathan Sexton was likely borne out of frustration than anything else.

ALSO READ:  Is George Ford The Best Fly-Half In England?

Ireland will certainly be pleased if somewhat frustrated. Considering the gulf in class that should have existed between the two sides, they’ll wonder how they failed to capitalise further given the number of factors in their favour. Ireland played fluid, flowery rugby, but there were times when a clinical edge wouldn’t have gone amiss, with Johnny Sexton’s boot struggling amid the swirling winds. Still, a very good start for the men in green as they look for a first Six Nations title since 2018.

If there’s a team more frustrating to watch than France, it has to be Italy. France are like a Ferrari confined to motorway traffic, always looking to burst through gaps and showcase their extraordinary speed, class and pedigree. Italy are like a homemade boxcar hurtling down a vertical slope, belting out of the traps with speed and promise until one of the wheels falls off and they end up upside down being dragged from a ditch on fire.

The problem that has plagued the Italians for years is utterly obvious yet confoundingly elusive: they don’t know how to win rugby matches. While this may seem like a banal statement to make about a team currently on the longest losing streak in Six Nations history, it’s worth noting that the Azurri are in no way a bad side full of bad players. In particular, the likes of Polledri (when fit), Garbisi, Padovani and co. are strong operators playing at the elite level of club and test rugby. Italy’s issue is that they have no idea how to master that most precious of skills in test rugby: how to win games.

Italy play at a mile a minute and make a great account of themselves, at least initially, but they are prone to too many errors in critical areas, knocking the ball forward just as they are entering the opposition 22 or else gifting tries from errors at the line out. The Italians can frustrate, they can attack and they can definitely play, but their game management is still severely lacking. Teams like England in 2016 or Ireland in 2018 played some gritty, ugly and sometimes downright appalling rugby on the road to two of their most successful years of the modern era.

France, meanwhile, were hampered by the elements as much as they were by their own inability to really spark their own fire. A bonus-point win against Italy is very much job done, but the French side’s susceptibility to the elements is one of the potential weaknesses of a team looking to finally make this their year. Flowing French rugby is somewhat hampered by a wet ball and poor visibility, and the tournament favourites will need to have contingencies and backup plans in reserve if their main game is disrupted by the elements, the opposition or anything in between.

Scotland are fast becoming England’s bogey team, besting the English in back to back Calcutta Cups for the first time in the tournament’s history. Many have tipped the Scots to really go well in this year’s Six Nations, and little wonder. While other teams are struggling with injury and ill-health, Scotland seem happy, content and well-preserved under Gregor Townsend. In what might end up being one of the most open and tightly contested Six Nations for a good while, Scotland could finally profit and end a seemingly endless curse that has prevented them from getting their hands on that most elusive of trophies. With Hogg, Watson and Harris all firing, Scotland have all the right pieces in place, but injuries to Jamie Ritchie and Josh Bayliss going into their fixture against Wales may have diminished the gap between two sides starting their respective tournaments in rather different ways.

England, meanwhile, will see their issues with injury as a reason for their defeat rather than an excuse. Sam Warburton raised an interesting point about the state of the English midfield, however, in that the seemingly massive reliance on Manu Tuilagi is causing them a serious problem. As he points out, a side with around 30 professionally contracted inside centres that aren’t able to replace or replicate Manu Tuilagi has serious issues, the England centre partnership seemingly only operating convincingly when the Samoan-born wrecking ball is available. Now at 30 years of age and around a stone lighter than before, Eddie Jones won’t be able to rely on Mighty Manu forever. 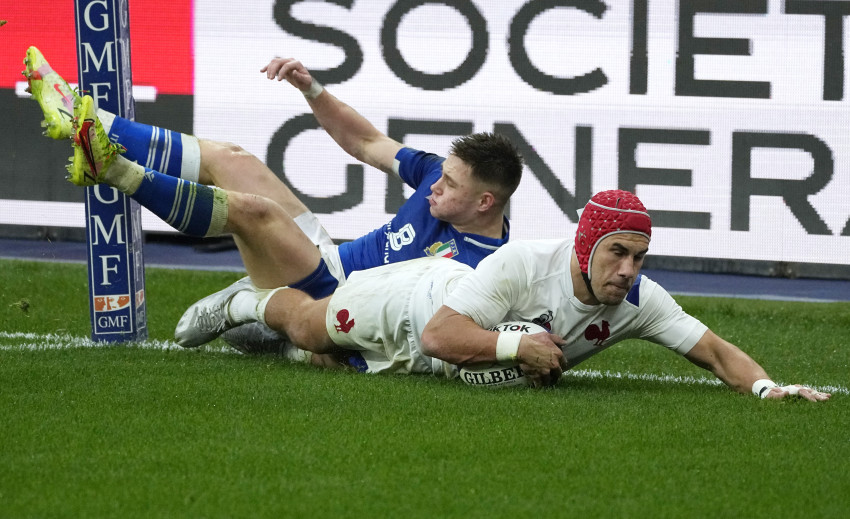