What is the George Halas Trophy?

The George Halas trophy is named after the founder and longtime owner of the Chicago Bears, George Halas. He served as his own head coach on four occasions and was lesser-known as a Major League Baseball player for the New York Yankees.

He was also one of the co-founders of the NFL (National Football League) in 1920 and in 1973 became of the first 17 inductees into the Pro Football Hall of Fame.

When is the George Halas Trophy Awarded?

The trophy is awarded to the winner of the NFC Championship, which is the annual championship for the NFC and one of the two semi-final playoff games of the NFL.

The game is played on the last Sunday in January by the two remaining playoff teams following the NFC postseasons’ first two rounds.

The NFC champion will then face the winner of the AFC Championship in the Super Bowl.

Who has won the George Halas Trophy?

Let’s have a look at the most historic wins in the NFC Championship that led to the award of the George Halas Trophy.

This is an account of a George Halas Trophy that will go down in history, and not for all that good of a reason, well, not for the Packers anyway. For the fourth time since they won the Super Bowl in 2010 the Packers lost in the NFC Championship game. This time it was due to a controversial finish in a 31-26 loss to the Buccaneers.

While the Tampa Bay Buccaneers beat the Green Bay Packers in the 2021 Championship, the historic value of this game is more about how this was the 4th loss in a ten-year period for the Packers. Someone cut them a break, they have to get a win soon, surely!

This game is historic as it was the first-ever time that the George Halas Trophy was given to the NFC Championship winner. And boy ‘o’ boy, what a game it was. The 49ers zeroed the Bears in that NFC game on the 6th January 1985, at 23-0. An absolute slaughter, however, months later in the following October, the Bears got their revenge. However, despite their later revenge, they were never the team to win the first-ever George Halas Trophy.

We bet the 49ers are very proud of that feat! We would be!

This game is well renowned for ‘The Kick’. And it was one of the weirdest postseason upsets in history. The Atlanta Falcons overcame a 13 point deficit to stun the Vikings, who went 15-1 during the regular season. While ahead 27-20, Gary Anderson, who did not miss a field goal during the regular season, missed a 38-yard attempt with only 2:07 left. The Falcons used this as Chris Chandler hit Terance Mathis for the game-tying touchdown with 57 seconds left.

The game was won on Jan 11th 1999 by the Atlanta Falcons, beating the Vikings 30-27. While it was a tight game, the kick absolutely made it, and it was one of the most astounding things the NFC saw in history that led to the George Halas Trophy. 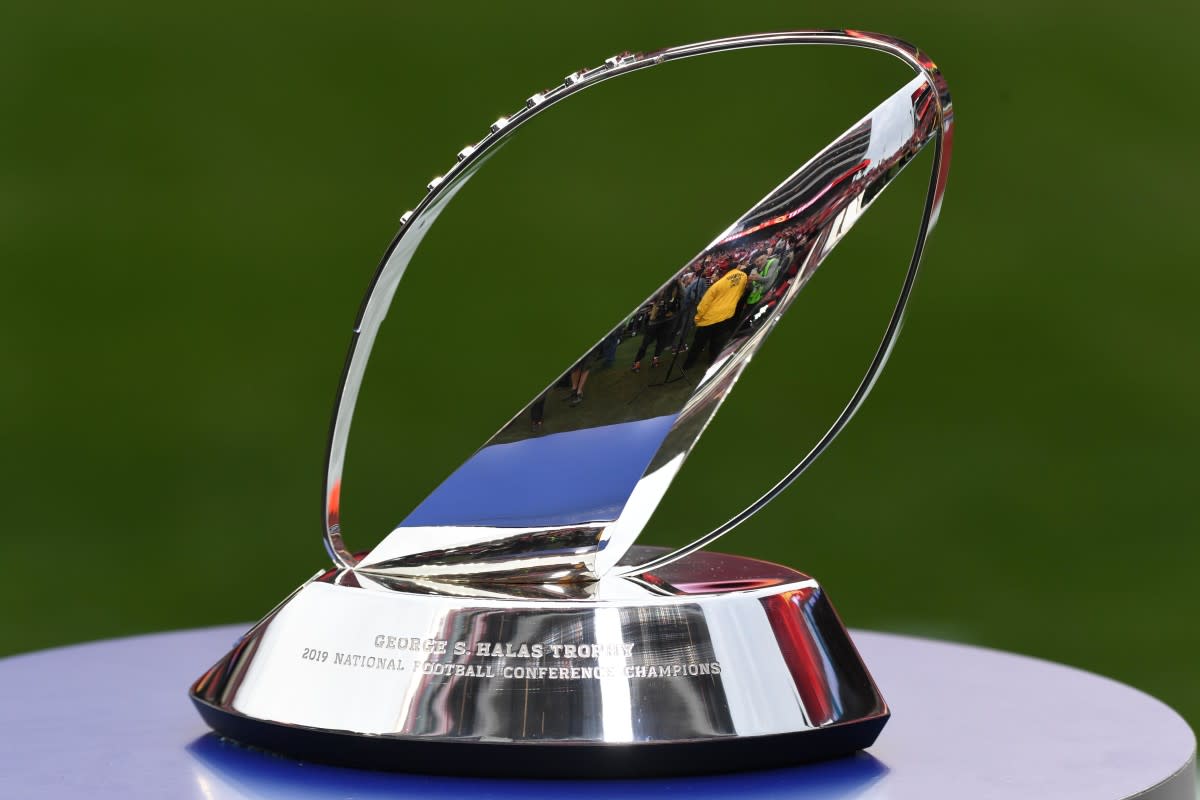