There are many rumors going around the league. Such as where will Kevin Durant play next year. There are many options on the table for Kevin & has meetings set up with teams such as the Thunder, Warriors, Spurs, Clippers, Heat, Knicks, and Celtics. Now many people think of course that he should sign with Golden State and he should just focus on signing with them, but could that really work? Here are three teams I think would be best for Kevin Durant.

Kevin Durant signing back with the Thunder would not be a bad decision at all. Especially now after sending Serge Ibaka to the Orlando for Victor Oladipo, Ersan Ilaysova and the draft rights to Domantas Sabonis, getting to play with Westbrook again as they both enter there primes, and also playing with Steven Adams.

A big man who has stepped his game up big time during the 2016 playoffs. So it wouldn’t be a bad choice for Durant to stay with the Thunder but Oklahoma City needs to pay the man because there will be a lot more offers coming to Durant.

I would not be surprised if this happens. I can totally see Kevin Durant going to Boston and it would make sense if he did. Boston has so much money. So much they have enough to sign two superstars. If Boston really wants Kevin Durant, they need to go ahead and give him a huge max deal. I don’t see Durant turning that down, he’ll be playing with All-Star point guard, Isaiah Thomas. Boston has a lot of young talent and adding Durant to the picture makes them automatic playoff contenders as long as Durant stays healthy. Durant would be on a playoff team, he’d be a great fit in Boston and he’s getting paid big time.

Word on the street is that the New York Knicks want Kevin Durant and Durant is wiling to have a meeting with the team. Sources also say that Knicks foward Carmelo Anthony has been trying to recruit Durant to the big apple.

This wouldn’t be the worst move in the world for Kevin. It’d be a great move for him, but the Knicks are surely aware that they need to come up with a big max deal for Durant. With Derrick Rose now being on the Knicks after being traded by Chicago, Porzingis entering his second year in the league, the Knicks are slowly starting to put the puzzle together but the question is can it all be put together by signing Kevin Durant? 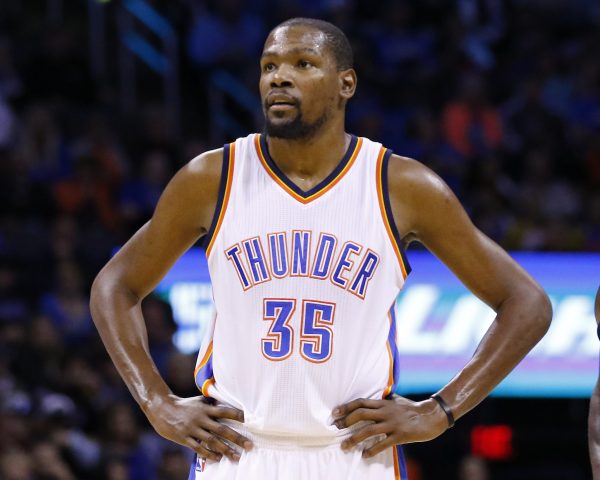