On June 12th, the UFC returns with one of the most exciting fight cards in recent memory. While every event the organization holds is sure to produce an unforgettable moment, it is rare that so many marquee names fight on the same night. Nate Diaz has developed a cult following over the years and he’s not even the biggest name on the card. Mixed martial arts enthusiasts absolutely owe it to themselves to watch the upcoming event to be held in Glendale at the Gila River Arena. Without further ado, let’s get into it!

Paul Craig won each of his last two fights by submission. However, it must also be noted that he hasn’t been seen inside the octagon since November of last year. Seven months is a significant layoff for any athletic endeavor; it will be interesting to see if he still has his timing after taking an extended break. That being said, he’s one of the most exciting fighters in the light heavyweight division. He’s won the Performance of the Night award five times, including his UFC debut in December of 2016.

Jamahal Hill emerged as the winner of Dana White’s contender series in July of 2019. Since then, he hasn’t lost a single match. The one blemish on his record is a no contest that resulted from a positive marijuana test after a win in May of 202o. Like his opponent, Hill is entering the octagon after a long layoff; he hasn’t competed at all this calendar year. Both of these fighters are considered contenders in their division. This should be a very entertaining match.

Demian Maia has had two UFC title shots in his illustrious career. He lost to the legendary Anderson Silva in a middleweight championship bout in 2010. It was a long time before he got another shot at a title; he lost his shot at the welterweight championship against future Hall of Famer Tyron Woodley in 2017. Although, he’s never been a UFC champion, he is a Brazilian legend. His gold medal at the World jiu-jitsu championship in 2000 earned him the respect and admiration of the entire country. Now at the age of 43, he is looking for a signature win before walking away from the sport for good.

The last time fight fans saw Belal Muhammad, it was a cringe worthy moment for lovers of the sport. He suffered an accidental eye poke at the hands of Leon Edwards that rendered him unable to continue. Fortunately, he has made a full recovery and is ready to erase the memory of that terrible night. Beating a well respected opponent like Maia would do wonders in getting his career back on track.

Leon Edwards does not want to be remembered as the guy who poked Belal Muhammad in the eye. He is one of the best fighters in the welterweight division and he wants a title shot. If he is able to beat Nate Diaz on the 12th, it will be a signature win and possibly enough to earn a match against reigning welterweight champion Kamaru Usman.

The public hasn’t seen Nate Diaz in the octagon since November of 2019. Taking more than a year and a half away from the sport is a risky move. However, fight fans can rest assured that a fighter of Diaz’s caliber will come into the fight prepared to give no less than one hundred percent. He’s always been one of the most popular performers in the sport but the odds will be stacked against him when he goes up a young, hungry fighter like Edwards.

These two men fought for the UFC flyweight championship in December of 2020. That fight was ruled a draw by the judges, hence, Figueiredo retained the belt. That being said, there is certainly no love lost between these two and fight fans should prepare for fireworks when they get in the octagon together.

Both of these men are black belts in Brazilian jiu-jitsu. Figueiredo hails from Brazil and Moreno hails from Mexico. Whenever two fighters from Latin America clash, there is always an instant rivalry and bragging rights are on the table. These components, in addition to the fact that their bout will be a rematch, make this a potential fight of the night matchup.

Make no mistake about it, these two men do not like each other. In April of 2018 they fought in Gila River Arena, the exact same venue that will host their June 12th bout. The difference is, this time Adesanya is the reigning middleweight champion and the belt is on the line.

The first time they fought, Adesanya was awarded a split decision victory. Since that day, Vettori has vowed to show the world that the judges made the wrong call the first time around. If he wins, Vettori will become the first Italian champion in UFC history. If Adesanya wins, it will mark the third successful defense of his reign as middleweight champion.

Most of the time, no matter how much trash talk goes into the prefight buildup, competitors shake hands in a sign of respect once the event is over. However, these two have so much bad blood between them that it won’t be surprising if they don’t acknowledge one another after the fight is over.

UFC 263 is a pay-per-view event available on BT Sport in the United Kingdom and on ESPN Plus in the United States. Make sure to tune in, fight fans. You’ll be glad you did! 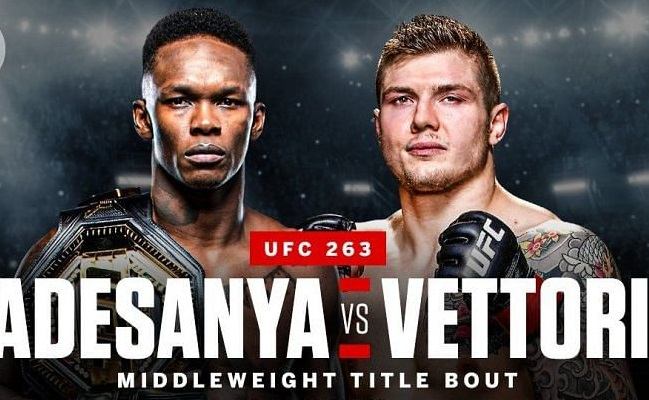