Swiss great Roger Federer turned back clock as he demolished Mischa Zverev who had an excellent run in the Melbourne Park , beating World No 1 , Andy Murray in just over 90 minutes. Returning from a 6 month injury lay off, nobody expected Federer to make the semifinals. But normalcy never applied to great champions like Federer and Rafael Nadal. Federer is  like fine wine, just getting better with age. This has been an excellent comeback from Federer, having played his last tournament , The Wimbledon Championships in 2016, 6 months back. It was just another masterclass from Federer, demolishing Zverev in straight sets to reach his 13th Aus Open semifinal.

First set was just sheer dominance from Federer, he just thrashed Zverev. Zverev tried to come to the net all the time, becoming very predictable. Federer stayed calm and stamped his authority over Zverev. Zverev was clueless, he did not have a plan B and his plan A was not effective against a brilliant Serve and Volley player like Federer. Federer raced to a 5-0 lead in the first set in just 12 minutes. Zverev finally held his serve and got on board to make it 5-1, but the damage was done already. Federer took the first set 6-1 in just 19 minutes.

Just when it looked like Federer would run away with this match, Zverev raised his game and played much better in the second set. He came to the net often, but his shots were measured , executed better and he made sure they were out of Federer’s reach. He was much more competitive, serving well. He got into the groove, broke Federer to go up 3-1 in the second set. But he could not capitalise on the break as Federer got a break back right in the next game to make it 3-3. Unforced errors were creeping up in Federer’s game, but he held onto his serve. At 5-5, it looked like this set was definitely going to a tie break, but Federer, got past Zverev’ s defense to go up 6-5 . He served for the second set, making it 7-5 to go up 2 sets to love.

Federer had lost just 4 times in his career when he had a 2 sets to love lead. But today he was in top form, he wanted to finish the match as early as possible. Both players held serve to make it 2-2. Federer had an opening in the 5th game to go up 3-2, but Zverev saves breakpoint to make it deuce. The pace of Zverev’ s serve has visibly gone down but he was hanging there. But players like Federer do not wait for opportunities, they create opportunities, an impeccable lob from Federer gave him a break point. It was just unbelievable , looked surreal. he breaks Zverev with a brilliant backhand down the line to go up 3-2 in the third set. Zverev looked tired, demoralised. His game plan was being reduced to nothing by the greatness of Federer. Nevertheless Zverev kept fighting. Federer held serve to go up 4-2. The 7th game of this set was the longest game lasting for almost 10 minutes. It involved 10 deuces Federer had a chance to break Zverev, but Zverev was relentless, both the players were not ready to give up, Federer breaks Zverev’ s resistance to go up a double break 5-2. Federer, serving for the match, with no pressure finished the match to reach the semifinals of this year’ s Australian Open.

It was a masterclass from Federer. There are 2 kinds of matches , one where both the players have a really close contest and another where one player completely dominates the other. Today’s match was the latter. When he is in such form, there is nothing a player could do. Federer dominated the rallies, he dictated the point and it was up to him whether he won or lost a point. Federer attacked Zverev’ s second serve , even exhibiting “SABR- Sneak attack by Roger”, coming charging in even before the ball was served to take the ball early. He gave Zverev really very less time to react as he was taking the ball really early and his winners which were almost double to that of Zverev was a defining factor in today’s match. Both were the same on the unforced errors count. Zverev’ s plan to come to the net every point was completely neutralised by Federer’s court awareness and his passes were just a treat to watch. When asked how he played against Zverev who came to the nets often , he said Zverev is athletic, he just adapted to the situation. He also added he would not mind the baseline slog fest which is the case with other players :D. A true champion!

It was a clinical match by Federer, overwhelms the giant killer setting up an all Swiss semifinal against Stan Wawrinka. Stan, a late bloomer who always stayed in Federer’s shadow, has 3 slams in the last 3 years. Federer has a 18-3 record over Stan and this would be their 22nd meeting. When asked about Stan, Federer said that he is really happy for Stan for coming this far, having won 3 grand slams in the last 3 years, but jokingly warns him that he still needs to play another match to reach the finals :P.

P.S- When asked about how he spent time with his kids, he said he would play games like hide and seek with the boys. And with the girls it was more about helping them with their homework and listening to their queries. A great Dad, A great player, A champion in the true sense. Fitting called The “Greatest of All Time” – GOAT! 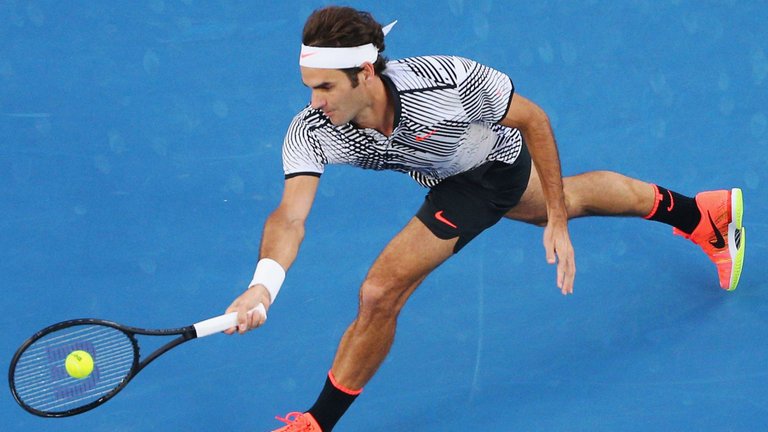