This team is killing me.

Red Wings lose, 4-3, in overtime(again!?!?) to the Boston Bruins. Another point but the agony of losing in the extra session continues. I can’t really rip on the powerplay considering that they only had one opportunity, the Bruins played a pretty clean game.(Sarcasm, I’ll get to it later.)

I liked the format that I used for the last recap, so I think I’m going to use that from now on.

1st Period: The Bruins absolutely dominated the Wings in this period. They reached twelve shots before the WIngs even got one. One of those twelve shots did go in, as Kevan Miller ripped a snapper over the right shoulder of Jared Coreau from the middle of the right circle to give the Bruins a 1-0 lead with 16:21 still to go in the 1st.

The Wings would not go shot-less the whole period, and Andreas Anthanasiou made the first one count. Mike Green found him streaking down the center of the ice, and AA beat his man for a 1 on 1 with Tuukka Rask. AA faked to the backhand, fooled Rask, and roofed it back on his forehand for his 11th of the year and a tie game.

I’m telling you, this Anthanasiou kid is going to be really good someday, so you’d better learn how to pronounce his name.

The Bruins would not go away, however, as they continued to dominate. Brad Marchand buried a rebound on the powerplay with 2:36 left, to give the Bruins a 2-1 lead going to the rooms. This, by the way, will not be the last you hear of Brad Marchand in this recap.

2nd Period: I felt that this period was more even, but I will give the advantage to the Wings, considering that they score 2 goals. The Bruins still dominated the shot column, but they wouldn’t score in this period.

6:25 into the period, Mike Green received a pass at the right point, and tried to slap pass it to Thomas Tatar going to the net. The puck ended up bouncing off a Bruins defender into the net, which means that Green was credited with the goal. His 9th of the year, and we’re knotted up at two. Four minutes and 26 seconds later, Thomas Tatar would get his goal, finishing off an end to end rush with a very, VERY soft goal inbetween the arm and chest of Rask. His 11th of the year, and it’s 3-2 Wings.

3rd Period:  I felt that this period goes to the Bruins. I feel like they played better overall, getting the only goal of the 20 minute session. That goal would come from Marchand again, who buried a backhand past Coreau to tie the game with 11:40 left in the period.

Overtime: Obviously the OT session goes to the Bruins, with David Pastrnak winning the game, firing a blistering shot past Coreau with 47 seconds left in the session. It was a great shot, I can’t say anything about it. I guess I would’ve liked the Red Wings to get a few more scoring chances in the OT, but the Bruins deserved to win this game.

Speaking of the Bruins and deserving things, I’m going to talk about the dirty play that was committed by Brad Marchand. Marchand is trying to skate into the Red Wing zone, but the play ends before he can. But instead of going to the bench or getting ready for the faceoff, he slew-foots Niklas Kronwall at the blue-line, who just came back from injury. For those of you who don’t know what a slew-foot is, he basically sticks his foot out and takes Kronwall’s leg out from under him.

Marchand is known for stuff like this, but that doesn’t make it ok to do. In my opinion, Marchand is a dirty rat, and even though this weasel move went unnoticed by the refs, Marchand needs to be punished. I was outraged when I saw this.

And I’ve also got to talk about Tomas Jurco. Reports came out early yesterday that Jurco was upset with playing time, and had requested a trade. If this is true, he should not have been playing last night(which he was). If Jurco doesn’t want to wear the Winged-Wheel, don’t let him. I have no problem about him being upset with playing time, but I feel that you don’t deserve to play in Detroit if you don’t want to.

Anyway, I’ll stop ranting. The Wings next game is at home against the Toronto Maple Leafs. This is a huge game for the Wings, considering that this is one of the teams that they will be battling with for that 3rd and final Atlantic playoff spot. The puck drops at 7 P.M Eastern. I apologize, by the way, for writing Central in the past few articles, got my time zones mixed up! 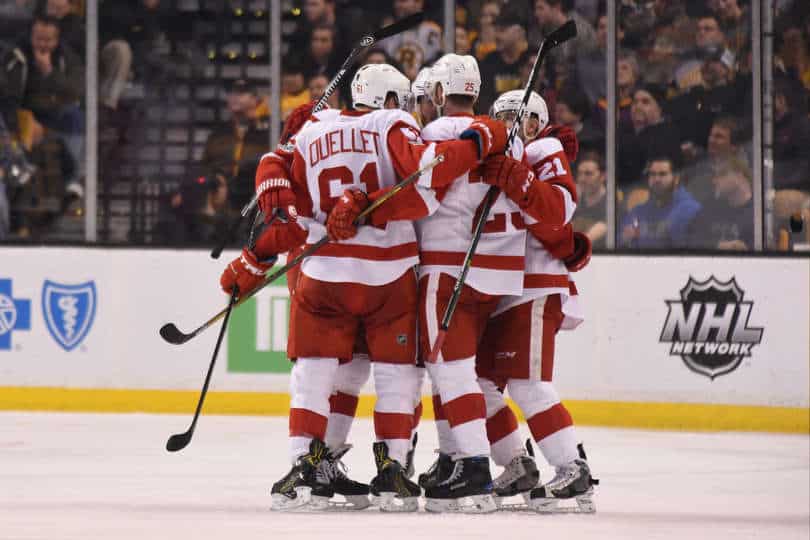