It is hard to escape the feeling that the two games on Sunday afternoon were something of a sideshow to the FA Cup semi-finals, with the European competitions coming to a head neutrals may be forgiven for overlooking Arsenal vs Fulham and Manchester United vs Burnley.

The Arsenal players certainly weren’t keen on proving anyone wrong with another result which underlines the weaknesses within the playing squad more than anything else. It is hard to judge if Arteta himself is the problem or if he needs more time to shape this group into one which reflects what he wants. What is certain is that despite some good possession play and a disallowed goal they utterly failed to break down a stubborn but somewhat lacklustre Fulham team.

The first half was probably the better of the two from an Arsenal perspective, Smith-Rowe and Lacazette found space easily on the edge of the box and Saka managed to get down the right a few times. This culminated in two chances, one for Martinelli after a pullback from Smith-Rowe and the disallowed goal which came from a Hector Bellerin cross.

The second half was poor until the last five or so minutes plus stoppage time, again Arsenal’s defence gave their opposition a way into the game.  Despite creating very little throughout the game Gabriel gifts Fulham a penalty through a borderline challenge on Lemina, Josh Maja steps up and scores with just over thirty minutes left to play.

To this point, Arsenal had not really threatened the excellent Alphonse Areola beyond the disallowed header from Ceballos but with the game coming to a close they laid siege on the Fulham box, forcing some last stitch defending and reflex stops. Eventually one of many corners comes out to Dani Ceballos who fires it in through the crowd, Areola makes a great save but can only push it into the path of Eddie Nketiah who puts it in the net.

Fulham and Scott Parker have made an admirable attempt at staying up but have failed to capitalise from winning positions all too often, this is another example. One feels that this was their last chance at making the great escape happen, it would take some remarkable results and a collapse from one of Brighton, Burnley or Newcastle, it just seems like too tall a task at this point.

Manchester United are the second-best team in the country. That seems like a strange thing to say given their obvious frailties, many of which were exposed by Burnley on Sunday afternoon. This game showed both what makes them good and why they aren’t better. From the very first-minute powerful target man Chris Wood caused United’s defence all sorts of problems; long ball over the top, Wood beats both central defenders and the keeper to head it into the goal.

The goal didn’t count but it was a sign of things to come, too often United look vulnerable under the high ball and their defenders can be bullied. After the opening salvo from Burnley, United took control, they held possession well and crafted a few good chances, the stand out being a header from Paul Pogba which went just wide. Greenwood was a persistent threat down the right, his aptitude with both feet means he can go round the outside or cut inside and be equally dangerous.

He was United’s best player on the day and provided opportunities for his teammates just as much as he looked to go for a goal himself.

Though Man United didn’t find the net in the first half the interchanges between the front four were impressive, it looked like a goal was coming but they hadn’t quite found the space in the box. This changed when Cavani came on for Fred after half time. Rashford had started centrally and though he didn’t play badly the second half showed why Cavani is so good and why Rashford belongs on the left.

Within three minutes Rashford is sent away by Luke Shaw, he cuts into the box and plays a pass across towards Cavani who lets it run to Greenwood who scores. An impressive goal that displays the kind of speed and guile Solskjaer wants to play with. The duality of Manchester United was displayed perfectly by what happened next, in the fiftieth minute Burnley win a corner and James Tarkowski beats both Harry Maguire and Aaron Wan Bissaka to head it past the United goalkeeper. 1-1.

Set pieces have been a weakness for a long time, the zonal marking system doesn’t seem to be working. This is perhaps the most obvious area of unimprovement during the Solskjaer era and it has come back to bite them again and again.

At this point the game opened up hugely, Burnley repeated managed to get in behind United’s high line but failed to capitalise, Dwight McNeil was a menace on the left-hand side and caused Wan Bissaka a few problems.

It could have easily have gone either way, even after Greenwood’s second Burnley still threatened and nearly got a second equaliser. Some desperate defending from Luke Shaw released the ball upfield to Fernandes who fed substitute Donny van de Beek, the Dutchman then played a well-weighted ball across goal into Cavani who secured the win. 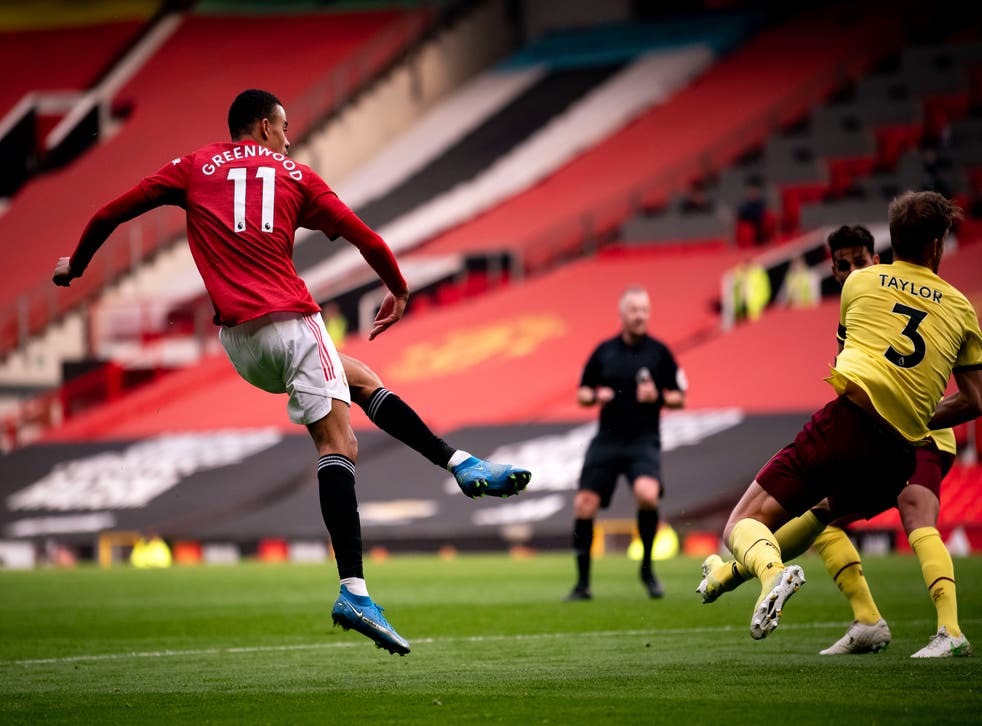