King of the clay Rafa Nadal snuffed out the challenge of young Spanish pretender Carlos Alcaraz on his 18th birthday, in the 2nd round of the Madrid Masters. The top seed, who is chasing his sixth Madrid title, defeated the wild card 6-1, 6-2, in front of a reduced, but noisy, home crowd in the Manolo Santana Stadium.

Alcaraz started the match brightly but had to take a medical time out in the third game of the first set and never recovered as Nadal raced into a 5-0 lead, and took the set 6-1. He kept up the pressure on the youngster in the second set, earning two early breaks, and although Alcaraz fought back determinedly to get one of the breaks back, Nadal was too powerful from the back of the court and won out easily in one hour and 16 minutes.

Alcaraz, world-ranked 120, had become the youngest match-winner in the tournament’s history with his first-round win over Adrian Mannarino, surpassing Nadal himself, who had set the record as an 18-year-old back in 2004.

Incredibly, Nadal had won his first ATP match before Alcaraz was even born, and would go on to become one of the most successful teenagers in tennis history, winning 16 titles, including his first French Open and six Masters titles, and getting to world no. 2, by the age of 19.

Alcaraz, though, showed why he is the most talked-about Spanish prodigy since Nadal as he earned a breakpoint in the very first game, playing some excellent groundstrokes. Unfortunately, he couldn’t take advantage, dumping a forehand into the net.

He was made to pay for his mistake as Nadal showed him exactly how it was done by breaking him in the very next game. He put pressure on his youthful compatriot with some fierce groundstrokes to draw errors on both wings, and go 2-0 up.

The match was shaping up into a tight, exciting contest as an unfazed Alcaraz fought hard in the following game to regain parity. However, at 15-15, Alcaraz over-stretched for a backhand lob and appeared to pull a stomach muscle, forcing him to take a medical time out.

The enforced break seemed to destroy all his momentum as Nadal increased his power level, particularly on his backhand, sensing his callow opponent was there for the taking and going for the kill, reeling off 10 points in a row to go up 5-0.

Alcaraz finally held his serve to encouraging cheers from the crowd, but couldn’t stop Nadal from serving out to love and winning the set 6-1.

Nadal’s superiority in the longer rallies forced Alcaraz to try and keep the points short in the opening game of the second set, but it resulted in too many unforced errors on both sides as he attempted to go for winners. His mistakes were compounded by poor serving – a double fault, followed by a weak serve – that was given the treatment it deserved, to hand Nadal the break. Nadal held serve and then broke again to go 3-0 up. The match was turning into a rout.

To his credit, Alcaraz did not capitulate meekly. Helped by a couple of Nadal errors, a superbly hit backhand crosscourt winner gave him his second break point opportunity of the match. Nadal’s trusty wide leftie serve to the ad court came to his aid, but a forehand winner and some excellent aggressive rallying from Alcaraz earned him the break at the second time of asking.

In a combative sport, mental resilience is essential, and Alcaraz’s resistance against the 20-time Grand Slam champion bodes well for his future career. But Nadal is probably the sport’s greatest pugilist and he retaliated instantly to win the following game to love with a rasping forehand down the line winner. He then held to make it 5-1.

Alcaraz again showed his fighting spirit as he served to stay in the match, saving a match point with a dramatic drive volley winner, to loud supportive cheers from the crowd. He saved another match point in Nadal’s following service game, but, ultimately, his heroic defending was to no avail as Nadal triumphed 6-1, 6-2.

After the match, Alcaraz was presented with a giant chocolate birthday cake by veteran Spanish player Feliciano Lopez to console him in his defeat.

Rafa Nadal will play another up and coming young player, Australian Alexei Popyrin, in the next round, after he, too, defeated a teenage star in the making, Italian 14th seed Jannik Sinner, in straight sets, 7-6, 6-2.

The young pretenders keep on coming to challenge the old pro, but Rafa Nadal’s comfortable victory demonstrated that even at the grand age of 34, the king of clay shows no signs of being dethroned any time soon. 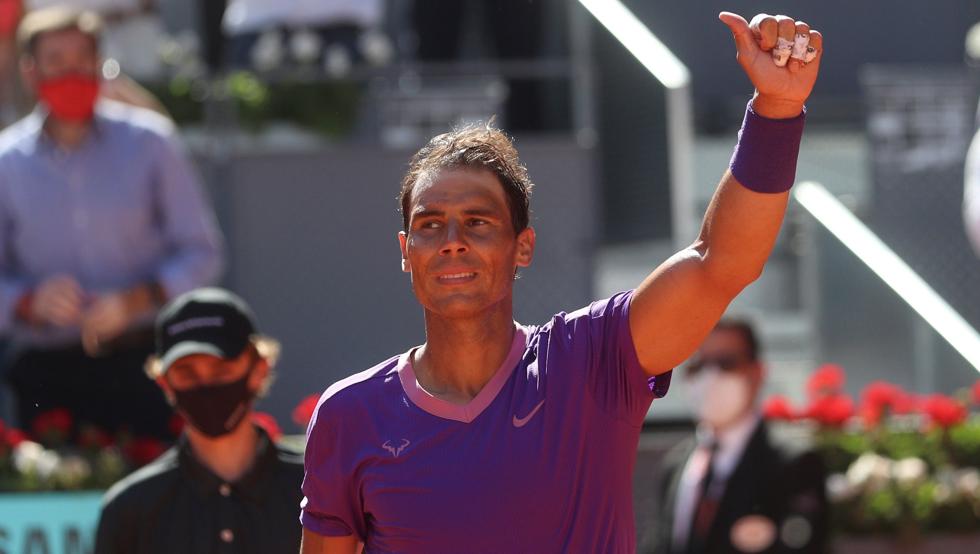