Rafa Nadal saved a match point to win his 12th Barcelona Open title in a gruelling 3-set battle against Stefanos Tsitsipas. The Spanish top seed and world no. 3 needed to call on all his resources to eventually triumph against the second seed in 3 hours and 38 minutes, in three fabulous sets, 6-4, 6-7 (8/6), 7-5.

The match was as close as the scoreline suggests, with both players having chances to win it. Nadal had two match points in the second set at 5-4 on Tsitsipas’s serve, but some big serving came to the Greek player’s rescue. Tsitsipas, too, had a match point in the third set at 5-4 on the Nadal serve, but several trademark top-spin groundstrokes from Nadal saved him. He then broke Tsitsipas in the very next game at the fourth opportunity, to serve for the title.

In keeping with a match of constantly swinging fortunes, Nadal faced a break-back point before getting a third match point chance, and finally won it with a typical wide serve-big forehand combination to gain victory. 34-year-old Nadal’s 12th Barcelona win puts him one behind his all-time tournament record of 13 French Opens. It was also his 61st tour title on clay, continuing his dominance on the surface, though in this case, just by a whisker. 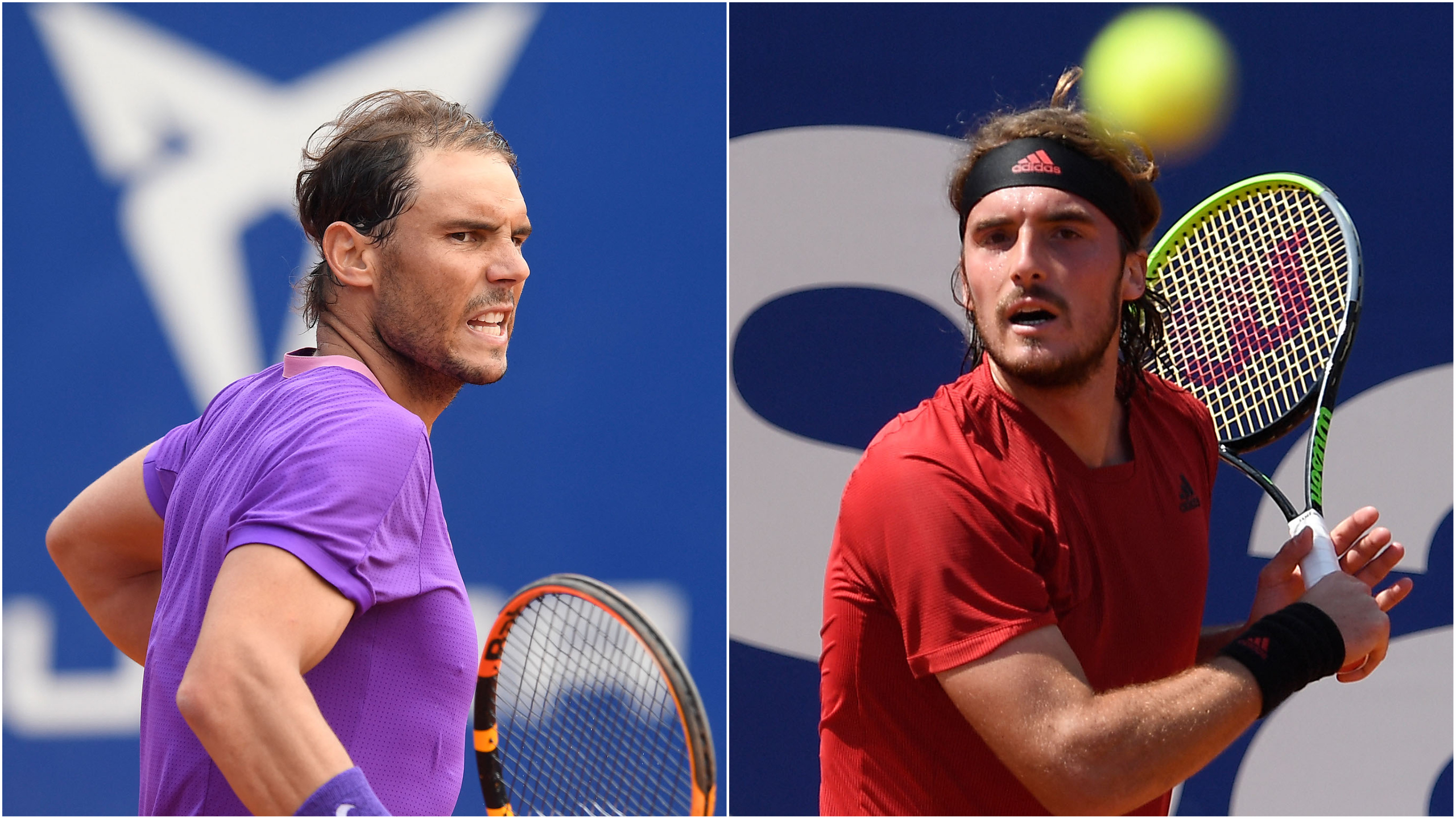 World no. 5 Stefanos Tsitsipas was the in-form player coming into the match on the back of his victory in the Monte-Carlo Masters 1000 and having won 17 sets in a row on clay. The last time the two players met, in the Australian Open quarter-finals, 22-year-old Tsitsipas came back from two sets down to win out in a five-set thriller. So this was a match up that promised much, and wonderfully, it delivered more. Aside from the three match points, there were twenty-five break point chances and six breaks of serve.

In a high-quality match, the standard of play was exceptional at times with Nadal hitting 36 winners and Tsitsipas 34, and it was a pity either had to lose. Not only did both players create numerous chances, but each dug deep when it mattered to save themselves with some determined and brilliant matchplay. The scores remained very close throughout, and it was a match that was won rather than lost. 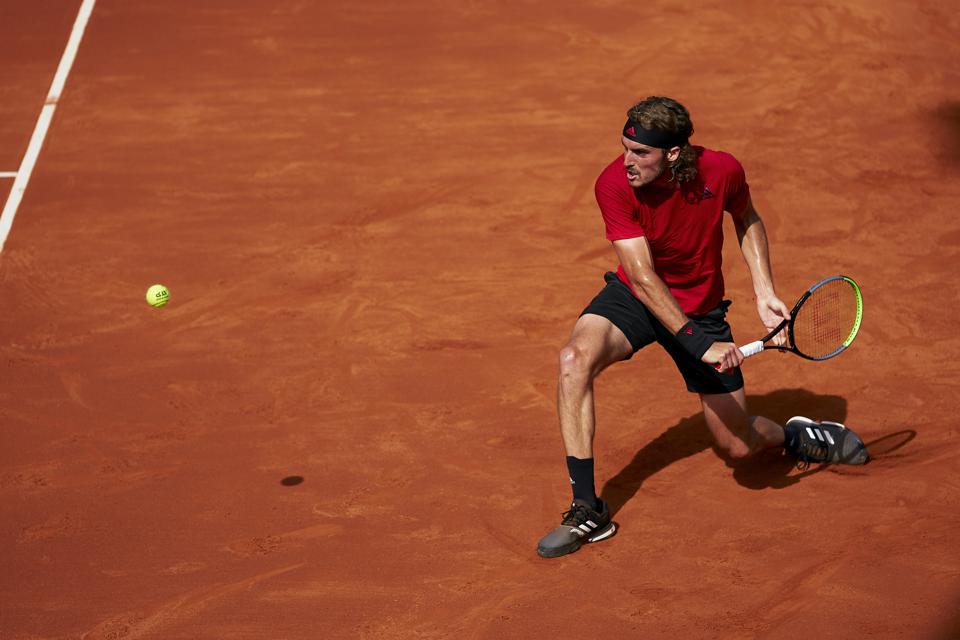 Stefanos Tsitsipas was able to go toe to toe with Nadal from the back of the court, and not only could he withstand typical Nadal pressure on his single backhand, but had the power to hit through the shot for winners, mostly cross court but also down the line, to put the pressure back on Nadal. Ultimately, it was just a moment of brilliance right at the end by the greatest clay court player of all time that finally separated them.

It was Tsitsipas who made the brighter start, breaking Nadal to love early in the third game with some attacking groundstrokes. He had a chance to go two breaks up on Nadal’s next service game with two more break points, but Nadal saved them thanks to some big hitting. He then broke Tsitsipas’s serve at 4-3 with a classic whipped forehand inside out winner, before having to save three more break points on his own serve.

Often, missing break point opportunities makes a player vulnerable to being broken themselves, and so it proved. A double fault to start and some good defence into attack groundstrokes from Nadal brought up two set points. A forehand error followed from Tsitsipas, and Nadal had turned the set around to win 6-4.

To his credit, Tsitsipas remained positive despite the setback and again got an early break in the second set, in the third game, but Nadal stormed back in the sixth, taking it on the third time of asking. Three more holds later, Tsitsipas found himself serving to stay in the match at 5-4. A couple of forehand errors by the Greek gave Nadal two match points. Two big serves and a lovely Federer-esque low touch volley winner saved Tsitsipas, and another sweet drop shot coupled with a cross court dink gave him a deserved hold. He showed his delight with a big fist pump.

Just like Tsitsipas in the first set, the missed opportunities, in this instance to win the match, seemed to play on Nadal’s mind, and after some error-strewn points, he quickly found himself 0-40 down. But he is the eternal fighter, and some brilliant forehands got him back in the game. The tit-for-tat battle resembled a game of cards where one player raises the stakes and the other raises them even higher, so it was inevitable that a tie-break would be needed to separate them.

The tie-break followed the topsy-turvy momentum shifts of the two sets, with Nadal this time getting the first mini-break, then Tsitsipas breaking back and subsequently going ahead to earn two set points, the first one on his serve. An over-ambitious drop shot by him was easily run down by his famously swift-footed opponent, and Nadal saved the second on his own serve with the wide serve and follow-up forehand shot back behind Tsitsipas.

But if that was the good, it was quickly followed by the bad as Nadal double faulted, giving Tsitsipas a third set point, once more on his serve. This time he made no mistake, delivering a 181 kph serve down the middle, and let out a loud, cathartic scream as he levelled the match at one-set all.

It was impossible to pick a winner in the final set shoot out, so close were the performances. The match seemed to settle into a calm after the storm period with a series of holds, but there was an underlying inkling that it was just building to a tense denouement.

So it transpired when at 5-4, serving second in the set, Nadal found himself serving to stay in the match. As was evident in his semi-final, Nadal has had trouble serving out sets and matches, and he made three uncharacteristic forehand errors to give Tsitsipas a match point. A great return by Tsitsipas to the baseline seemed to have given him the advantage, but some powerful groundstrokes laced with vicious top-spin brought Nadal back into the point and eventually forced the error. 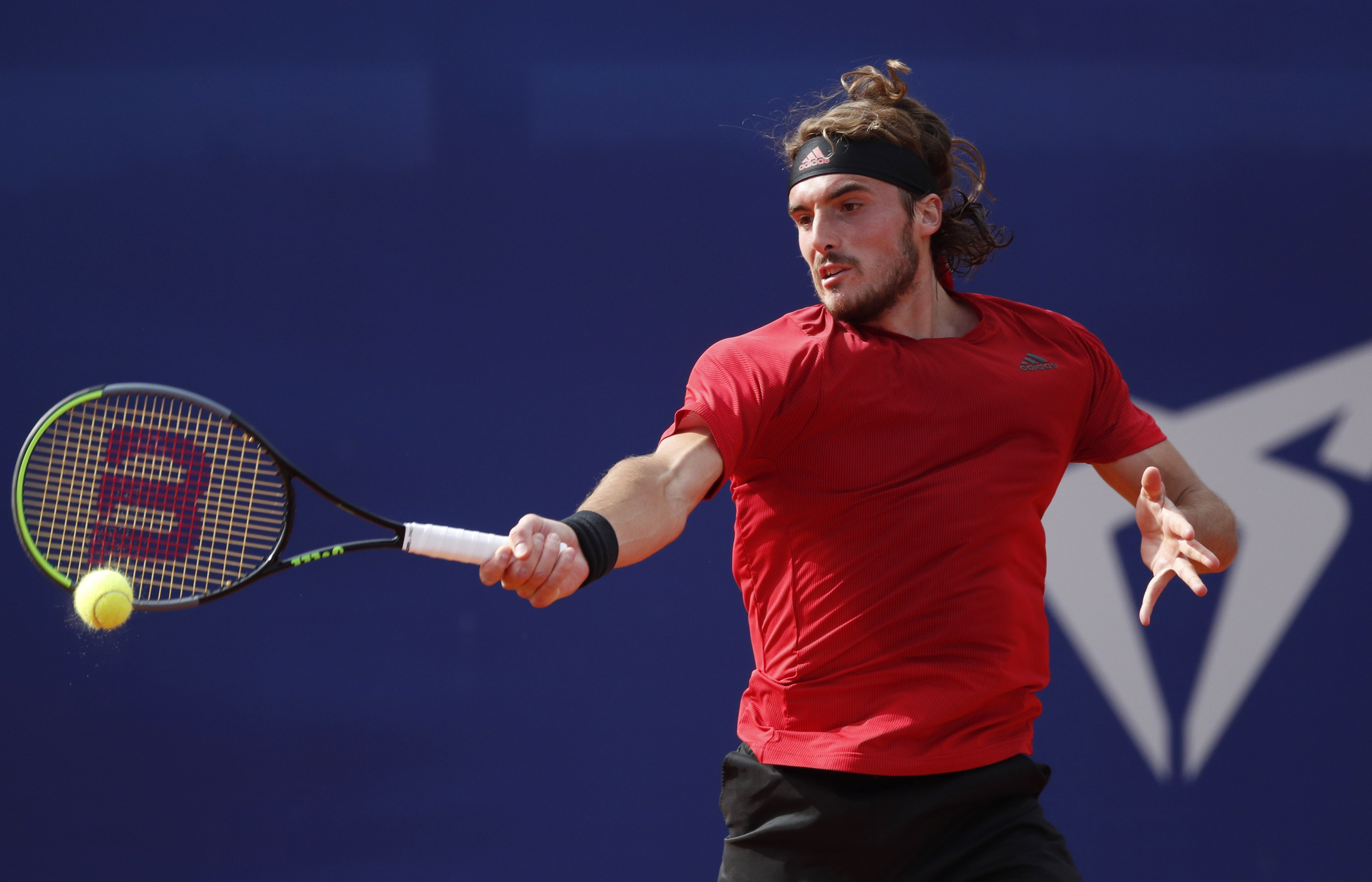 Tsitsipas, though, obdurately refused to go away. He was throwing everything bar the kitchen sink at Nadal, and some weak second serves by the latter assisted him by putting pressure on the server. After another deuce, a whipped top-spin forehand from Nadal drew a backhand error from Tsitsipas, and another wide serve plus inside out forehand to the opposite corner combination enabled him to come in and just place a low half-volley agonisingly past Tsitsipas. A gritty hold from Rafa to make it 5-5, and it was his turn to show emotion with a massive fist pump to the cheering crowd. 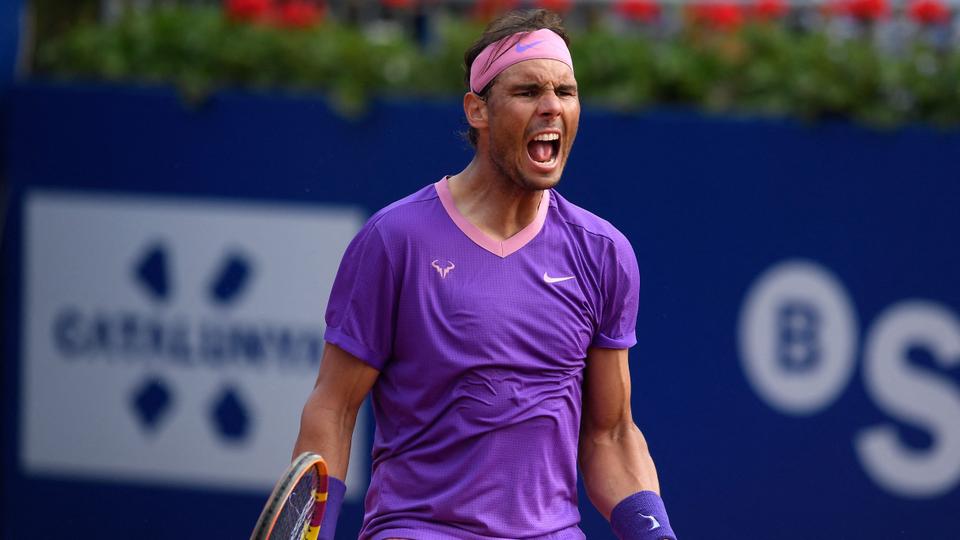 The match had now gone way past the three hour mark and the shadows were beginning to lengthen. Still the players could not be separated, and the tension was cranking up. In the next game, a big unforced error on his forehand, followed by a double fault, meant Tsitsipas found himself down 15-30. An incredible get from Nadal to a huge Tsitsipas forehand somehow just dropped to the back edge of the baseline, forcing Tsitsipas to retreat, enabling Nadal to play a drop shot winner and bring up two break points.

It was now Tsitsipas’s turn to show just what he was made of. In the fiercest heat of battle, he unleashed a huge 220 kph serve, followed by a big forehand, and then just managed to reach Nadal’s attempted pass to hit a volley winner. Another big serve and then a big forehand to the other corner that just clipped the line, made it deuce. A weak second serve of only 139 kph though was punished by Nadal and earned him a third break point, but again a big serve-big forehand combination saved Tsitsipas. Yet another huge serve of 198kph helped give him game point but he couldn’t take advantage as he put a forehand into the net, for a third deuce in the game.

It was like two heavyweight boxers slugging it out for their lives with both landing heavy punches but neither willing to give in. Tsitsipas’s big first serves had been saving him, but going for his serves made for high risk tennis. Another slow second serve of just 134 kph enabled Nadal to hit a good return down the line, which Tsitsipas could only dump into the net. A fourth break point for Nadal. Could he take it this time?

Under pressure, Tsitsipas did deliver a big first serve of 190 kph but Nadal managed to return it and Tsitsipas’s forehand across the court flew wide. At last, a toppling punch had been landed. It was 6-5 to Nadal, and he would be serving for the match.

The big question was whether Nadal could serve it out for the win. It started well with a weary Tsitsipas backhand into the net, followed by the classic leftie serve on the ad side that was so wide Tsitsipas would have needed to jump into the stands to connect properly. Nadal looked to be on his way, but then the tension of the moment got to him. An unforced error on a forehand that flew long and a double fault at the most unfortunate moment – just as in the second set tie-break – soon had him pegged back to 30-30. A surprising volley error into the net made it 30-40.

From a comfortable position of 30-love and two points away from the match, Nadal had lost three points in row to find himself facing a break point. Was this match going to another tie-break? Tsitsipas would certainly have merited it, even if most of the crowd were willing on their home favourite.

Again, the trademark wide serve and big forehand to the opposite corner brought it back to deuce. The tension was palpable in Rafa’s seemingly endless ball bounces. Unsurprisingly perhaps, a weak 136 kph second serve followed, but Nadal reinforced it with some huge, heavy forehands, dragging Tsitsipas from side to side before putting away a short ball at the net for a winner. Nadal gave a big uppercut fist pump to the crowd who responded with roars of encouragement.

He now had a third match point 1½ hours after his first two in the second set, but this time on his serve. Once more, it was the faithful wide outswinger serve on the ad side combined with the big forehand to the opposite corner that worked for him as Tsitsipas’s attempted forehand cross court pass just strayed out. 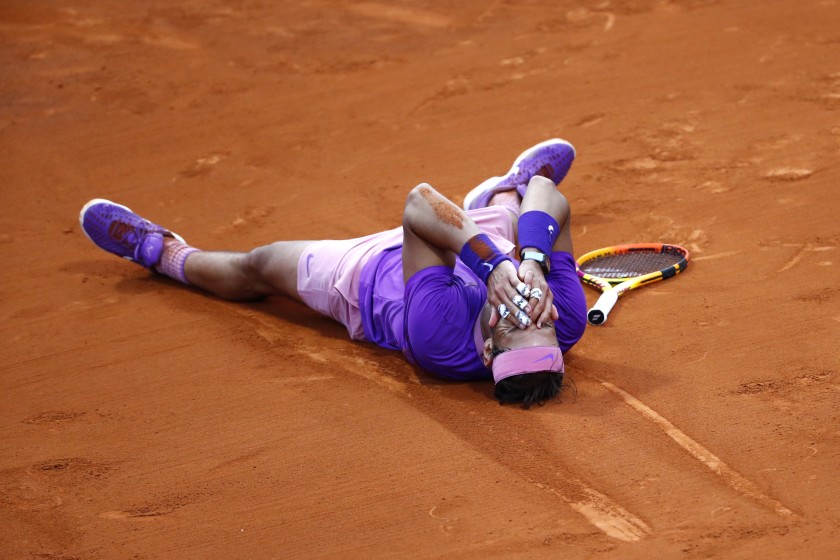 Finally, after a 3 hour 38 minute slug-a-thon, Tsitsipas’s resistance was broken and Nadal had won his 12th title on his court, Pista Rafa Nadal. As the victor tumbled to the ground in disbelief, the vanquished looked on, devastated and close to tears. Tsitsipas had made a valiant effort to prise this clay court title out of Nadal’s iron-clad grasp, and only just come up short. Surely, with such a champion’s performance against the greatest of champions, his ascendancy to the summit cannot be far away. 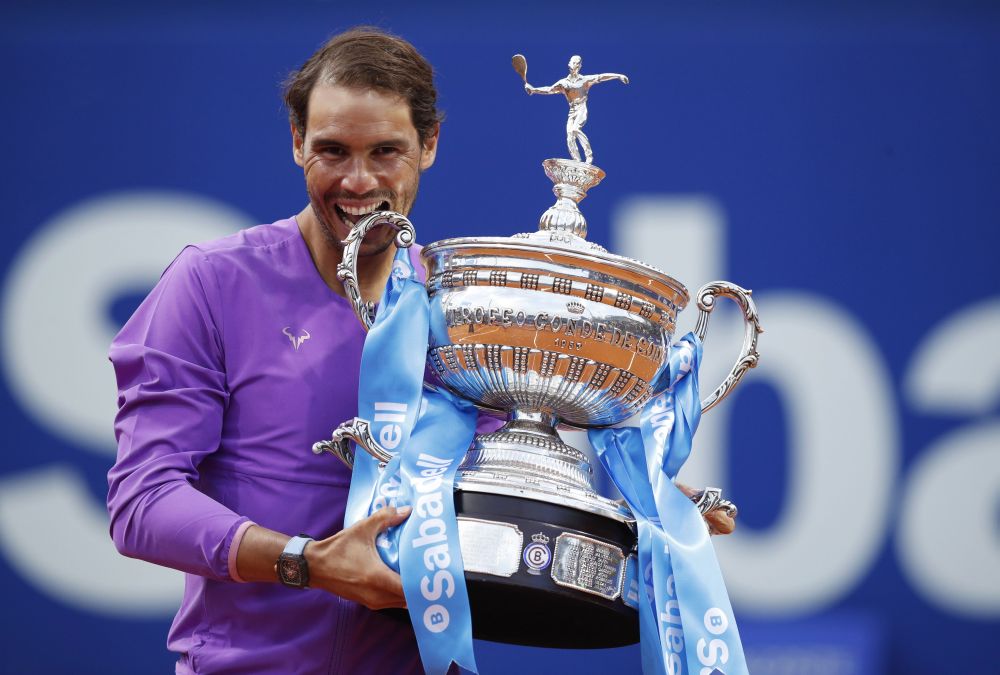