Ten years on from heartbreak in the 2012 World Cup Final where Australian pair Simon Whitlock and Paul Nicholson lost out to England duo Phil Taylor and Adrian Lewis in the most dramatic of deciding legs, the Aussies have finally been crowned Champions of the World for the first time. The team from down under have become just the fifth nation to lift the trophy since the tournament’s inception in 2010, doing so in sensational style overcoming three of the top seeds in Belgium, England and the 2020 victors Wales on the final day scooping the £70,000 prize at Frankfurt’s Eissporthalle.

The first quarter-final was between the Netherlands and Northern Ireland. Danny Noppert faced off against Daryl Gurney and posted a 4-2 victory with Dirk van Duijvenbode coming back from 3-1 down, with the aid of a magnificent 153 finish, to defeat Brendan Dolan 4-3 and book the Netherland’s place in the semi-finals.

Wales then faced Germany and Gerwyn Price was in top form as he took out a ‘Shanghai’ finish to take a 1-0 lead in his match against Martin Schindler. He then followed that up with the highest checkout there is, taking out a beautiful 170 out to go 3-0 ahead and one leg away from the match. He eventually wrapped up a whitewash victory with a majestic 119 average. Jonny Clayton had a tougher battle in his match against German number 1 Gabriel Clemens, but prevailed 4-2 to complete the job for Wales.

Australia went 1-0 down in their quarter-final after Dimitri van den Bergh defeated Damon Heta 4-2. ‘The Heat’ was now relying on his partner, and one of the few ever present players in the World Cup, Simon Whitlock to bail him out and give Australia a chance of going through in a doubles decider. That he did as he got the better of Kim Huybrechts 4-3 in a close encounter where ‘the Hurricane’ conjured up some magic of his own to level the score at 3-3 with a 170 checkout, unfortunately for him he just wasn’t quite able to close out the match.

The Australian pair were brilliant in the doubles decider as they raced into a 3-0 lead with two crucial breaks of the Belgian throw. Simon Whitlock completed the victory with the duo finishing the match with an average just short of 110 showcasing just how well they played to get themselves into the World Cup semi-finals.

The last quarter-final was a showdown between two of the oldest rivals in professional sport, England and Scotland. It was a brilliant start for the English pair as Michael Smith, one of the most in-form darts players in the world, beat John Henderson 4-0 in a comfortable encounter. James Wade and Peter Wright faced double trouble in the opening leg of their clash as both players got themselves down to double 1 with James Wade taking the shot out after ‘Snakebite’ had missed two darts at the double. From there, Wade was able to get the better of the world number 1 with a 4-1 success as England knocked out the defending champions.

The opening fixture of the semi-finals was between Danny Noppert and Gerwyn Price with Wales never having beaten the Netherlands in the past, losing to them on two separate occasions. Price continued his fine form taking out a ton plus finish of 115 to lead 2-0 in the tie, he would go on to register a 4-1 win. Once again, Jonny Clayton had a more arduous task against Dirk van Duijvenbode but he did close out a 4-2 win for himself, and a 2-0 victory for Wales making them the first country through to the final.

Australia took on the top seed England as Michael Smith and Damon Heta met in the first match of this semi-final. All of the first three legs went with throw but, in the fourth leg it was advantage England as Michael Smith was able to break the Heta throw on tops. ‘The Heat’ was able to force a deciding leg however, after Smith mistakenly bust his score in the fifth leg, and he rounded off an impressive victory 4-3. All eyes were now on the second match as James Wade needed to win to have any hope of facing Wales in the final. However, ‘the Wizard’ was in fantastic form as he led 3-0 having denied ‘the Machine’ any attempts at a double. Whitlock was able to seal the Australian’s place in the final in sensational style with a commanding 4-0 win over the world number 5.

The final was contested with a slightly different format as it was first to three points rather than two. Heta versus Price was the first match and Damon Heta got a break of throw to race into an all-important 3-0 lead. He completed a whitewash victory over the world number 2 and if Simon Whitlock could get the better of Jonny Clayton, Australia would be one point away from the title. The start of this match did not go the Aussies way though as Jonny Clayton made of a statement of intent taking out 106 to take the lead. However, ‘The Wizard’ hit back and went on to lead 3-2 after a magnificent ‘Shanghai’ finish broke the Clayton throw. In the fifth leg Whitlock missed six darts at tops allowing ‘the Ferret’ the opportunity to level the scores but he missed two darts at double and Whitlock eventually converted tops to give Australia a priceless 2-0 advantage.

The Australian pair needed just one more point from the doubles match to finally win the World Cup. They took a huge 2-0 lead in this match making the uphill task Wales were facing even harder. However, the Welsh pairing consisted of two of the best players in the world and Price and Clayton hit back-to-back maximums in the fourth leg with ‘the Iceman’ converting double six to make it a level game. In the seventh leg the score stood at 3-3 and it looked like the tension had got to ‘the Wizard’ as he missed a match dart, and Jonny Clayton punished him to force yet another singles match as the overall score in the final became 2-1.

Damon Heta now had the opportunity to win the World Cup for his country against Jonny Clayton. He was handling the pressure brilliantly and once again put the Australians one leg away from the win as he took a 3-1 lead over ‘the Ferret’. In the fourth leg, Clayton missed three darts at double but Heta was unable to secure the trophy and Clayton took the leg to give the Welsh hope of levelling on points. Finally, that hope was extinguished as Damon Heta hit double sixteen to become his nation’s hero and win the World Cup ten years on from heartbreak for his partner Simon Whitlock. The pair must have felt like it was destined to be as they jubilantly lifted the trophy for Australia.

‘It is life-changing. I have dreamt about this moment my entire life and I’ve finally got there.’

‘I’m stoked for Simon and stoked for Australia with all the support we’ve had back home.’

Emotions were understandably running high for Heta and Whitlock but it was not just the joy of winning that caused this, it was as they remembered Kyle Anderson who tragically passed away in August 2021. He represented Australia in this competition reaching the semi-finals alongside Simon Whitlock and ‘the Wizard’ dedicated the victory to his former partner.

‘Kyle was amazing. A great guy, a great dart player, and it’s fantastic to lift the trophy for him’

Damon Heta, who was the driving force behind the fundraiser which raised £30,000 for Kyle Anderson’s family, also played tribute discussing how he played Anderson’s walk-on song before his first match against Belgium to give him inspiration, and how much it meant to him to lift the trophy in Kyle Anderson’s memory.

‘I played his walk-on song before I went on for my first game against Belgium, and that gave me a little bit of inspiration.’

‘To win it for Kyle and for Australia in general, it’s incredible.’

It feels as if the stars aligned for Australia this year and they will be hoping to successfully defend their crown this time next year when the World Cup of Darts comes around again. 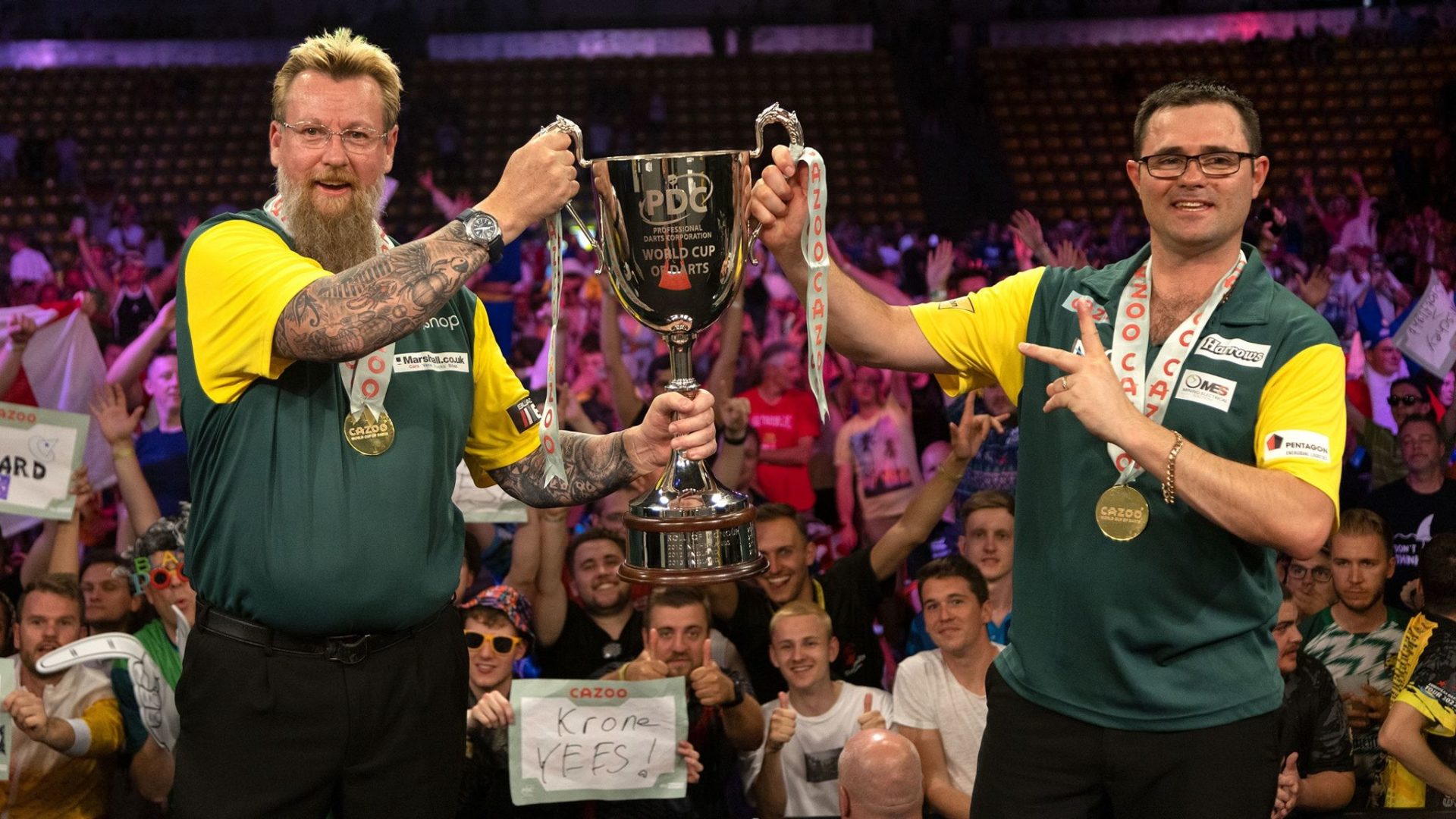