Raj Bawa’s all-around performance helps India to a fifth Under19 World Cup victory over England by four wickets, thanks to a stunning performance from seam bowling all-rounder, Raj Bawa.

When England Captain Tom Preist won the toss and elected to bat, he would have been hoping for a good start from his openers.

Unfortunately, they lost Jacob Bethel, who was trapped LBW by the left-arm pacer, Ravi Kumar, in just the 2nd over of the match.

Kumar soon had his second, when he removed Priest midway through the 4th over with England 4-1.

George Thomas and James Rew steadied the innings, with a partnership of 19 in 6.4 overs.

Before Thomas, who attempted to flick an off-stump ball from Bawa, was caught off a leading edge by India captain Yash Dhull, making it 18-2.

William Luxton followed soon after when he nicked a short and wide delivery form, Bawa to keeper Dinesh Bana, England were in a whole heap of trouble at 47-4.

Bawa made in two in two, by getting George Bell, for a first-ball duck with a snorter of a bouncer.

Rehan Ahmed and William Luxton tried to stem the flow of wickets.

But Bawa soon had his fourth at 61-6, when Ahmed edged one to Kaushal Tambe at first slip.

James Rew tried everything he could, to hold England.s Innings together.

Bur at the other end, wickets continued to tumble as Alex Horton drilled Tambe straight to Dhull at mid-on.

Rew brought up his fifty in the 30th over.

But he perished at deep mid-wicket to Kumar, with Tambe making a simple catch look slightly difficult.

England was really struggling at 185-8, with seven overs still remaining.

Before Bawa ended England’s dismal innings of 189 when Josh Boyden was caught behind by Bana,

As this was considered to be a below-par score, England knew they had to make early inroads from India’s batting, to stand any cance of defending this below-par score.

And they got an early scalp in Angkrish Raghuvanshi at 0-1, as he knicked Boyden off to keeper Horton of the second ball of the match.

Harnoor Singh and Shaik Rasheed steadied the ship with a partnership of 49.

Before Harnoor gloved an attempted hook through to Horton, leaving the chase on a knife-edge at 49-2 from 17.2 overs.

The Captain and Vice-Captain put on a partnership of 56 for the 4th wicket.

Before Rasheed’s ambitious pull on the leg side of James Sales, found the hands of Rew at cow corner, just outside the 30-yard circle at 95-3

Sales soon had India’s captain, when his attempted pull picked out Bell at deep square leg for just 17 runs. The game was on a Knife-edge at 97-4, with India still requiring 93 to win.

With the wicket of Dhull, England felt they were in with a real chance of defending their target, but Raj Bawa and Nishant Sindhu had other ideas.

Together, they shared a sixth-wicket partnership of 67 to bring the four-time champions to the brink of a fifth title.

But England wasn’t done yet, and at 164-4, Bawa’s attempted pull off Boyden found the hands of the England Captain at mid-on.

It was now 164-5, and many fans started to wonder if the was another twist to this amazing final.

And Ahmed added some more spice to it, by taking a stunner, to dismiss Kaushal Tambe for just 1.

But Bana and Nishant Sindhu’s cameo partnership of 19 off 8 balls was enough to see the Indians over the line.

“It’s been amazing to test ourselves against the best players who are of our age. I think we’ve done ourselves proud and we’ve put in some great performances so I couldn’t be prouder of the boys.” “Obviously choosing to bat first, we would have liked a better start, but the way James Rew then batted to get is 95, I think he deserved 100 and then we got to a score that we felt were kind of in the game with and I think we gave that a good crack.”

“He is very strong mentally, he knows what to do in crunch situations, and he is very confident about his game,” “While we have been enjoying ourselves, he has been focusing on his bowling in a big way, spending more time at training, speaking to the coaches, speaking to VVS (Laxman) sir. So the improvement showed.” Especially with his use of the short ball, which Dhull said the bowler used sparingly to “surprise the batters”. (on Bawa’s Peformance)

Ever since the first victory by an Indian team at the U19 World Cup, It has been a launchpad, for members of the team that took part, took make a name for themselves, particularly in International cricket as well as the IPL. Dhull is confident that just like Virat Kohli, Prithvi Shaw, Shubhman Gill, and Yuvraj Singh, he will be wanting to make a name for himself on the biggest stages of cricket.

ALSO READ:  Silverwood In Danger Of Being Axed By England

“I will play cricket in the future too, so the conversations with (Laxman) sir and others is that the focus has to be on the cricket, and everything else will take care of itself. The main thing is the mindset. If I am strong, I will be focused, and take it match by match whatever opportunities I get,”

As for England, although this defeat will hurt, this generation of cricketers has proven that this country is still filled with talented cricketers, who are determined to compete and win from any situation, and to one day, bring more success in this sport for the country as well as themselves.

What a tournament it has been in the Carabean, 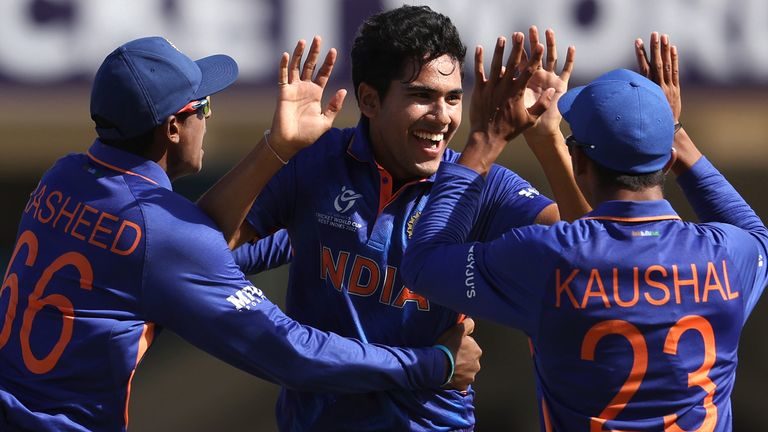