With the regular season rapidly coming to a close, teams will be preparing to welcome an addition to their roster by way of the 2016 NBA Draft. There will be several teams making a return to the lottery. Franchises including the Minnesota Timberwolves, Phoenix Suns, and the Los Angeles Lakers will all make their disheartening return to the lottery this year.

It’s always beneficial for a team to acquire a young player that can be developed into a substantial piece; however, to constantly be victim to terrible/subpar seasons is a different situation. Nonetheless, whichever organization is fortunate enough to have their ping pong ball selected for the No.1 pick will have several worthy options to choose from.

The Philadelphia 76ers will ultimately finish with the worst record in the league, only managing to muster up 9 wins over the course of 77 games. As a result of their putrid season, General Manager Sam Hinkie and the 76ers will have the highest probability at landing the No.1 overall pick. However, it’s not guaranteed that they will leave the draft lottery victorious even though they lost more games than any other team. Back in 2012, the Charlotte Bobcats concluded with a .106 winning percentage and seven total wins.

Subsequently, at the 2012 NBA Draft Lottery, the Bobcats were left with the No.2 pick in the draft and elected to take Kentucky forward Michael Kidd-Gilchrist. He hasn’t exactly turned out to be such a no-brainer decision. Nonetheless, for the sake of predictions; the Philadelphia 76ers will have possession of the first pick heading into the 2016 NBA Draft.

The City of Brotherly Love can’t be too happy with the 76ers tragic performances over the last few seasons. They haven’t gotten anywhere near the postseason since the 2011-12 season, and they’ve made countless questionable decisions. They’ve made interesting choices in the past three drafts, electing to select centers for three straight years; all within the first 10 picks.

Nerlens Noel, drafted in 2013, has proven himself to be a defensive stud; but he has shown to have durability issues. Same with Kansas’ one-and-done big man Joel Embiid; he has yet to see the court since being drafted.

Lastly, Jahlil Okafor is a major offensive weapon and has proven he can score in the post, but he has troublesome issues with maturity. The 76ers can’t handle another incorrect draft decision. They’re approaching another season without making the playoffs, and they possess a roster not fit to compete in either conference on a consistent basis.

With that being said, there are two admirable candidates to be the No.1 overall pick in this draft; their names are Brandon Ingram and Ben Simmons. The 76ers will perhaps take a look at Buddy Hield for three point shooting, Jakob Poeltl to indulge their love of centers, and Kris Dunn for use of a floor general; these are definitely not the front-runners though.

Brandon Ingram is a 6’9’’ forward with above average ball handling, the ability to shoot spot-up or off the dribble, and length to bother shots. He’s been compared to Kevin Durant due to his slim frame and impressive scoring arsenal at his size.

While he may be only 18 years of age and has time to bulk up, his slender build might be a red flag for the future. His weight is currently 195 pounds, so he’s guaranteed to have difficulties finishing among the trees in the NBA. The other option is an extreme jack of all trades, LSU forward Ben Simmons.

Simmons has shown that he is the most complete player in this draft class. He can rebound, averaged 11.8 rpg on the season, he’s a superb passer, averaged 4.8 dimes on the season, and an efficient scorer, averaged 19.3 ppg on 56% shooting. However, Simmons doesn’t seem to have that killer instinct in him.

He was unable to guide his team to the NCAA tournament, which brings concern to his leadership and his ability to take over. Nevertheless, Simmons is intelligent and has a high basketball IQ. While a killer instinct is something that’s hard to teach, arguably unteachable, so is an innate knowledge of the game.

The question now is, which forward should Philly pick? This is their fourth consecutive selection in the lottery, they can’t afford yet another mistake. The right move here would be to draft Ben Simmons with the No.1 overall pick. Every player on the Philadelphia roster will benefit from playing with Simmons. Simmons is extremely versatile and while his jump shot might not be super dependable, he is still an elite athlete with vision and playmaking skills. The 76ers need a savior, and Simmons could certainly be that player to finally guide them towards the light. 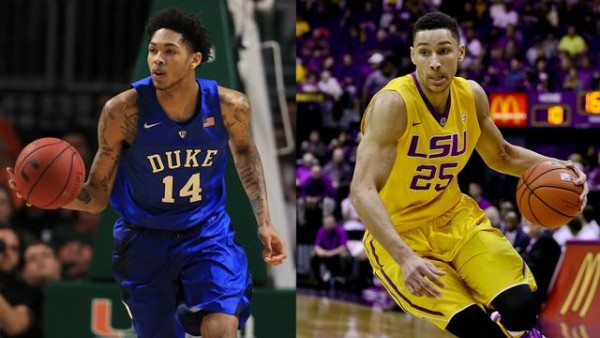