Kyle Busch dominated on Sunday, leading 352 laps and pulling away on a restart with 11 laps to go and outrunning AJ Allmendinger to the finish for his first NASCAR Sprint Cup Series victory on the series’ smallest, oldest oval, and a sweep of the two-race weekend.

He had won for the first time in 31 starts at Martinsville in the truck race on Saturday.When the green flag flew, Busch jumped clear of the front runners, Allmendinger beat Kenseth to the inside position and Kenseth got shuffled back to 15th.

It was the first victory of the season for Busch, which puts him into position to defend his Sprint Cup Title.

“I was a little worried there toward the end before that last caution came out that Matt was catching me,” Busch said. “He was on me pretty good and I wasn’t sure that I had enough brake in order to handle the rest of the day, but fortunately we got a yellow there.”

Several other drivers who pitted started in the sixth row, or worse, of side-by-side racing, and while Larson and Keselowski recovered for top-five finishes, others stuck in traffic which allowed Dillon to creep up into the front of the pack come crunch time.

“It feels really great,” Dillon said. “I feel like when you go through something like we did — I was pretty much distraught Friday and qualifying 29th because we hadn’t been that bad all year

Denny Hamlin, one of the favorites going in and the defending Martinsville winner didnt work out well however. Hamlin was running fifth after 221 laps, recovering from a pit road penalty until his car lost control heading into Turn 1 and slammed into the wall, sending him to the garage. He never returned, and finished 42nd.

It was the second straight race on the oldest, shortest race in the premier series that was a huge disappointment for Kenseth. Last spring, he crashed race leader Joey Logano with 46 laps to go, picking up a two-race suspension for his troubles. Junior spun on lap 5 and dropped back, he finished 14th. 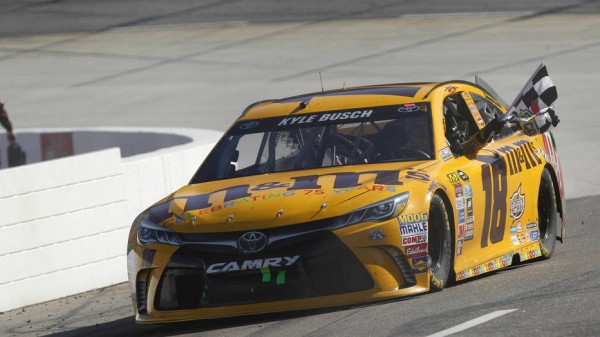