An electrifying batsman – full of elegance

With breathtaking batting displays, lethal bowling spells, horrendous collapses of the batting order, nail-biting finishes, upsets the cricket World cup 2015  produced everything that a cricket fan would die for ! It has truly been an engrossing fare with an all-round entertainment!

All the four most deserving teams ,i.e. ,India, Australia, South Africa and New Zealand who were toppers in their pools reached the semi-final stage but New Zealand seem to be the strongest of them all even though by a small margin.

The Black caps started their campaign in style by thrashing Sri Lanka in their first match and ever since, they have been doing well. With four wins on the trot, they quickly asserted their supremacy in Pool A!

More than the victories, the manner in which the Kiwis registered them, makes them most dangerous. Except in the encounter against Australia which they won by the skin of the teeth thanks to Kane Williamson’s cool head, they simply pulverized their opponents in all games. The Kiwis have always been considered dark horses in the World cup but this time, they are one of the hot favourites to clinch the coveted title!

The Black caps have been lethal with both bat and the ball. Blazing knocks by Brendon McCullum, who is also one of the most belligerent batsmen in modern day cricket, at the top of the order gave the Kiwis an early advantage throwing the opposition on to the back foot. True to his reputation, he inflicted serious damage on the bowling attacks with an audacious stroke-play right from the outset. In addition, pacers like Tim Southee and Trent Boult too rose to the occasion with five-wicket hauls and almost won the matches single-handedly.

The quarterfinal match against the West Indies illustrated their aggressive brand of cricket better than any other game. While the Windies might have been wary of the dangerous opener McCullum, it was the other opener, Martin Guptill, which blew them away with an incredible 237*. Guptill is one of the most exciting batsmen in world cricket today and is sure to enjoy a long career.

The contribution of Daniel Vettori, who may be playing his last World cup, is another significant factor. Besides picking up crucial wickets, the wily left armer often put brakes on the scoring rate with tight bowling. With the players putting in stellar individual performances and clicking well as a unit too, the Kiwis may well go the distance this time around! 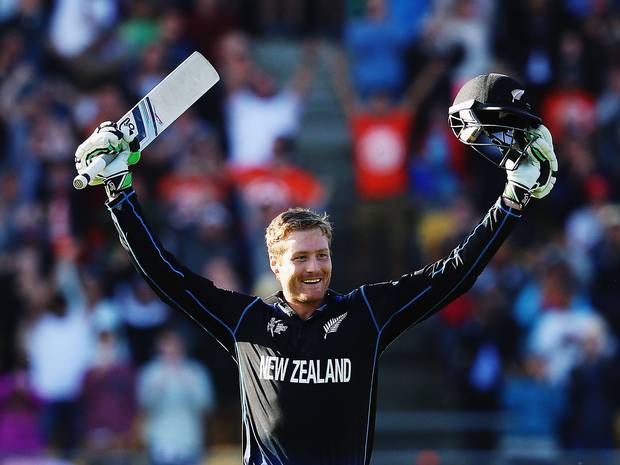