The Blues shocked the hockey world with the announcement that they had fired Ken Hitchcock early yesterday morning. This came after a 5-2 loss the previous night to the Winnipeg Jets. This left the team toiling in the fourth division spot with 53 points and barely clinging to the final Wild Card spot in the Western Conference. They have lost five of their last six games.

Hitchcock is a well-respected coach, and ranks among the best in history, with the fourth-most wins (781) and was one away from tying third-place Al Arbour when he was fired.

After coaching the Blues to the Western Conference Final last season, Hitchcock signed a one-year contract on May 31 and announced that this would be his last season as a coach. Unfortunately, his tenure has been ended prematurely in light of the Blues’ recent struggles. The team has been in crisis mode for the last month and a half.

The Blues have struggled defensively and in goal, unable to keep the puck out of their own net. Both Jake Allen and Carter Hutton have been unable to make meaningful saves to keep their team in the game; in some cases, such as a 7-2 blowout at the hands of the Washington Capitals a few weeks ago, they were hardly able to make any saves at all. In that game, Allen was pulled twice. He was then left at home as the Blues embarked on a road trip, but Hutton hardly fared any better. The team even tried out rookie Pheonix Copley , but that also ended up with another loss in the record books. Allen finally got back in net on Tuesday against the Jets, and although he looked much more confident, he still allowed 5 goals. This dropped his record to 17-13-3 with a 2.87 goals-against-average and a .895 save percentage.

Not really the numbers Blues management was hoping for when they traded Brian Elliott this past summer and signed Allen to an extension.

Many have laid the blame at the feet of GM Doug Armstrong, who allowed veteran players such as Elliott, David Backes, Troy Brouwer and Steve Ott to leave in the offseason and failing to adequately replace them. Armstrong misjudged his group of players, believing they were capable of much more. But now, it looks like players such as Brouwer were the glue that held the team together and brought Hitchcock’s systems to fruition on the ice. The result is that Hitchcock has paid the price for Armstrong’s failure to plug the holes on his roster.

So now the team is turning to former Minnesota Wild head coach Mike Yeo to set things right and push the team back to being a contender. Yeo was hired as an assistant coach in June, and, with Hitchcock announcing his retirement, was scheduled to take over the head coach spot next season.

Yeo compiled a 173-132-44 record over five seasons with the Wild, but failed to make it past the second round in the playoffs.

Since the firing, the players have come out to say they were shocked by the move, so maybe it can finally spark something in this team, who was supposed to be a contender this year, but aside from a stretch at the beginning of the season, hasn’t looked very good at all.

Maybe the Blues will pull a New York Islanders-style turnaround and be able to rally, make the playoffs, and go on a deep run.

The Blues’ progress (if they make any) under Yeo will be a story to watch for the remainder of the season. One thing is for certain: every one in the St. Louis locker room and management team is hoping something is going to change soon.

It has to. The Blues’ long-term future is hanging in the balance. 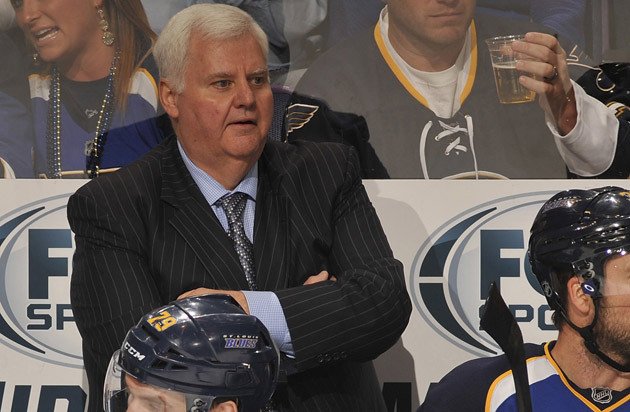