Skip to content
You are here
Home > US Sports > NBA > Butler, Nunn, Guides Heat to Victory Over Bulls 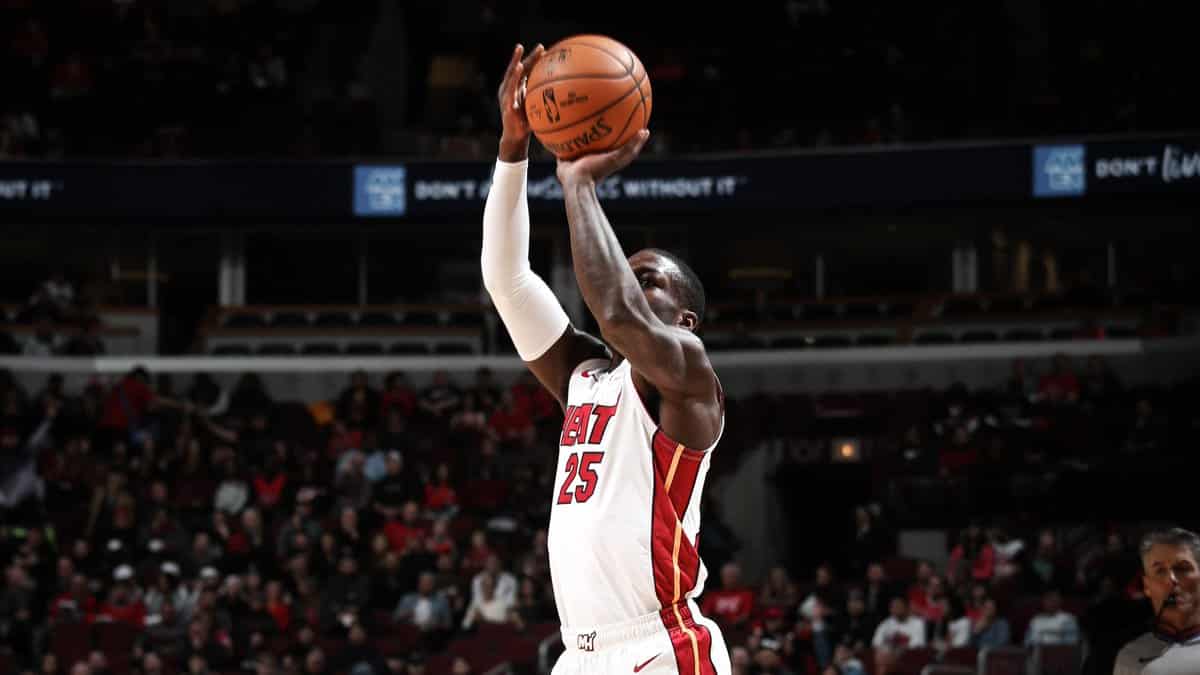 It was a homecoming for Jimmy Butler and Kendrick Nunn as the Miami Heat visited the United Center to face the Chicago Bulls. The Heat looked to keep their winning streak going, after defeating Cleveland and Detroit on their home court. Heading into this game, the Heat would still be without Justise Winslow, Derrick Jones Jr., and KZ Okpala.

Miami went on a fifteen to nothing run, before Lauri Markkanen got Chicago on the board with a layup. After a three-pointer from Meyers Leonard and Ryan Arcidiacono for the Heat and the Bulls respectively, Miami continued building on their lead with baskets from Bam Adebayo. With Miami leading 25 to 11, they went on a nine to five run to close the first quarter, taking a 34 to 16 lead.

The Heat continued their dominant offense with three-pointers from Goran Dragic and Kelly Olynyk, while the Bulls answered back with a dunk from Wendell Carter Jr. and free throws from Zach LaVine. As the Heat led 42 to 24, they went on a thirteen to four run before rookie Colby White got himself going for the Bulls with a basket and two free throws. After a dunk and two free throws from Adebayo, Miami led 57 to 32. Chicago ended the second quarter on an eleven to ten run, which saw Arcidiacono make a buzzer beating layup. By halftime, Miami led 67 to 43.

In the third quarter, Butler and Nunn continued to lead Miami’s offense, while Markkanen and LaVine did the same for Chicago. With Miami leading 75 to 57, the Bulls went on a fourteen to four run before it was ended by a dunk from Adebayo, followed by a breakaway layup from Dragic. After a three-pointer and a basket from White, Miami ended the third quarter with free throws from Butler and Olynyk, plus a layup from Nunn, leading 85 to 67.

As the fourth quarter commenced, Duncan Robinson and rookie Tyler Herro each knocked down a three-pointer for Miami, while Thaddeus Young and Kris Dunn responded back with a layup and three-pointer for Chicago. With Miami leading 91 to 69, the Bulls went on a twenty to six run, but a basket from Dragic and three pairs of free throws from Butler ended the run for Miami. The Heat would hold on towards the final buzzer, winning 116 to 108.

Another Heat win from wire to wire. The Heat maintained the lead throughout the contest, and while the Bulls rallied late in the game, capitalizing on Miami’s 19 turnovers, they managed to stave off Chicago with a few free throws from Jimmy Butler. The Heat’s bench were the difference makers, making a total of 35 points against the Bulls. On top of that, it was great night for Jimmy Butler and Kendrick Nunn. The Heat made 49 percent from the field, 85.7 percent from the free throw line, and 36.8 percent from the three-point line.

For the Heat, Jimmy Butler led the way with 27 points, Kendrick Nunn made 21 points, Goran Dragic had 16 points, Kelly Olynyk with 10 points, and Bam Adebayo with a double-double of 16 points and 14 rebounds.

For the Bulls, Zach LaVine had 15 points, Colby White and Thaddeus Young with 12 points each, plus Shaquille Harrison and Ryan Arcidiacono made 10 points each.

The Heat have a big test ahead of them tomorrow as they visit the Wells Fargo Center, where they will face the Philadelphia 76ers. Game starts tomorrow at 7:30pm and will be televised locally on Sun Sports.

has updated a post."Mighty Mike Returns"
5 hours ago

has published a new post."Mighty Mike Returns"
10 hours ago