The Denver Nuggets have over-achieved once more this season. Last year was their breakout year, but this season was a winning one, too. The Nuggets’ season ended with the team third in a stacked western conference and only 2.5 games back of the title-favorite Clippers. The team has one of the top 10 players in the league, a formidable bench, and intriguing young players with room to grow. The team has succeeded this season because of various factors: first and foremost, Jokic’s MVP level play, the team’s new acquisitions, the team’s gradual growth, and the team’s extraordinary depth.

In this modern era of basketball, it is hard to see a team led by a Center, winning it all, but it isn’t unthinkable. Want to know who is going to win the NBA finals? Follow Wunderdog the most trusted handicapper in sports for all your sports picks. The real problem for this Denver team is that their second-best player, Jamal Murray, is inconsistent(that’s an understatement) and not even resembling being as good as the other contender’s second options.

Nikola Jokic ties Embiid for seventh place in my top 10 NBA players. The two also rival for the best center in the league.

The Serbian phenomenon had a very similar season to the last one, that isn’t an insult, though. Last year Jokic had an MVP caliber season, carrying Denver not only to its first playoff appearance in 5 years but to a second-place finish. If you are even a casual fan of the league, you know about the big man’s passing prowess. Sometimes it seems he has eyes in the back of his head. He throws dimes, even some of the best guards can’t deliver. He has the court vision of a guard in the body of a honey bear, Jokic manipulates opposing defenses with no-look passes that freeze the defenders, in my opinion, he is the best passing big man of all time. The center is also an exceptional post player and can bully his adversaries, throwing his weight around. His post ability is even more deadly because if doubled, he will make the defense pay passing to an open shooter or a cutter. Many consider him a bad defender. He lacks the athleticism to contest shots vertically at the rim and stick with fast-footed guards and wings, but his vision helps him on this end of the court, too. He positions himself in the right spots because of his IQ. Nikola’s weight helps him tremendously in the post, where he can absorb contact. His best defensive trait is his quick hands, which show in his above-average steal numbers.

Jokic isn’t a sharpshooter, shooting just over 30% from beyond the arc, but I find that he can improve in this regard, especially with his weight loss. I honestly don’t think Jokic’s weight loss is going to hurt him. The Serbian’s slimmer frame will make him quicker, which will improve his defense significantly, especially when put in the pick-and-roll. It will also strengthen his offensive game. He’ll shoot more accurately, his first steps and his drives will be quicker. The negatives of a slighter frame would be his post defense and offense, but I find that his offensive post game is more reliant on footwork and touch than on his weight. On the other end, I believe it is more important to be able to defend in space and switch than to battle in the post, as there are not many dominant post players.

Jamal Murray is a hard player to rank. On his best nights, he looks like a top 5 point guard in the league, but in his worst games, you ask yourself why he’s taking so many shots. His inconsistency has followed him in the playoffs, too. During game two against the Spurs, he had three horrendous quarters and a stellar end to the game, bringing the Nuggets to a win and erasing a 19 point deficit. Murray has seen improvement in his shooting at the rim, his defense, and his overall influence on winning. Murray’s true-shooting percentage has also increased to around league average because of his improved rim finishing and free throw rate. He still isn’t a great playmaker, but with a creating big-man like Jokic on the team, he doesn’t have to be. The strange thing is that his three-point percentage has dropped to below-average. I find him to be a better shooter than what his numbers suggest, but he has to take more threes and make them at a higher rate if he wants to get to the next level. If Jamal Murray can consistently make 25-points per game on decently efficient shooting in the playoffs and defend at an average rate, the Nuggets’ title odds increase considerably.

Paul Millsap is arguably more impactful than Jamal Murray to this team. When he is on the court, the team’s defensive rating is 7.5 points per 100 possessions better, and his overall net rating is 11.5, which is almost the same as Jokic’s and Murray’s combined. Without him, the Nugget’s defense goes to shambles. His first year with the Nuggets, he only played 30 games. The following season Millsap was healthy, and because of this, Denver made the playoffs. He isn’t a one-way player, though, as he has contributed on the other side of the ball, too. Millsap has developed into a sniper from deep this season, shooting 44%, but on only 2.5 attempts per contest. He is also a capable, yet not great mid-range shooter, and a reliable rim shooter. In the playoffs, Paul Millsap remains a great defender and assumes a broader role as a scorer, particularly with more post-ups, isolations, and mid-range shots. He has demonstrated to be able to bring it in the postseason and, as most players do, dips only slightly in efficiency with the greater responsibility. This offseason brings a hard decision to the Nuggets front office: Should we resign Millsap or not? Millsap’s playoff performance in the playoffs is one of the decisive factors in this decision, together with Grant’s play in the postseason. If Grant can come close to matching Millsap’s production, the team will not need the veteran and, unless he accepts a smaller deal, will let Millsap walk.

Will Barton has had one of the best seasons of his career, averaging 15 points per game on decent efficiency, above-average three-point shooting, and improving on defense, too. He has also had the best net rating of his career at 5.8. Barton has also been a steady playmaker averaging almost four assists a game. His defense has progressed considerably and, even though he isn’t at elite levels and can’t guard stronger wings like Lebron or Kawhi, he is not a burden at this end. In last year’s postseason, Barton was atrocious, with a -8.4 net rating. He shot the ball very poorly, and for these reasons, he played just 9 minutes a night. This year, given the much better regular season, I assume, Barton will perform similar to the regular season in the Playoffs, giving the Nuggets another source of offense, aside from Jokic and Murray.

Gary Harris – The fifth starter, regressing in his fifth year

A few years ago, I thought Harris could become one of the best shooting guards in the NBA, with his talent on both sides of the ball, his scorching shooting, and his athleticism. I remember watching highlights of his crafty finishes, his thunderous dunks, and his active defense, and thinking that he was going to be a star soon in this league. That didn’t happen, and in his fifth year, Harris had the worst three-point shooting, true-shooting, and points per game average of his career, excluding his rookie season. He has been a disruptive on-ball defender, but if his shooting struggles continue, I find it troublesome to keep him in the starting lineup beside Jokic.

Jerami Grant: In the offseason, the team acquired Grant from OKC, I found it to be one of the cleverest under-the-radar additions of the entire summer. Grant is very comparable to Millsap, as he is a switchable defender and a good shooter on low-volume. He has shown promise off the dribble, but for now, he is a cutter and a shooter on offense.

Monte Morris: Morris is one of the best backup point guards in the league. Last year he was phenomenal, scoring ten points per game on very efficient shooting. This season wasn’t bad but wasn’t as good. Morris scored eight points per game and still was reasonably proficient, but his size damages the team on defense. In the playoffs, Morris is a liability on one side of the court because of his incapacity to switch. I find that last season’s struggles on the offensive end, won’t repeat themselves because of his added experience.

Mason Plumlee: Plumlee is a suitable backup center, but he brings a passing aspect that most backup bigs don’t, the offense can have a playmaking big at all times. He isn’t even close to Jokic’s level, but he can make passes to cutters and shooters out of the high-post. He is also an excellent pick and roll finisher, and the Nuggets can use this action more when Jokic is off the floor as a steady fount of offense.

Micheal Porter Jr.: MPJ is the x-factor for the Nuggets in the playoffs and the future. If he can rise to star level, he can take the Nuggets to the finals, maybe not this year, but perhaps next year or the year after that. He can become one of the best scorers in the league and possibly its history. But now, let’s stop talking about his potential and start speaking about what he has shown this season. He is a pretty bad defender, but with his height and length, this can improve over time. Porter has been a very efficient scorer from three and the rim. He is perfect alongside Nikola Jokic because of his shooting and cutting. Porter Jr. has also already shown his self-creation ability, and if he can do this more and consistently, the Nuggets can have real title aspirations.

Honestly, I don’t think the Nuggets can win, not because of the Nuggets depth, but because the West is costellated with dynamic duos, and I don’t find Murray to be on par with the second-options of other teams in the conference. I think if the Nuggets want to win a title, they need Murray to be the team’s third-best player, which can happen via trade or internal growth(probably MPJ’s). In conclusion, to me, barring incredible performances Murray and astounding growth by Porter JR., the Nuggets will realistically reach the second round, where they will be knocked out by the Clippers. 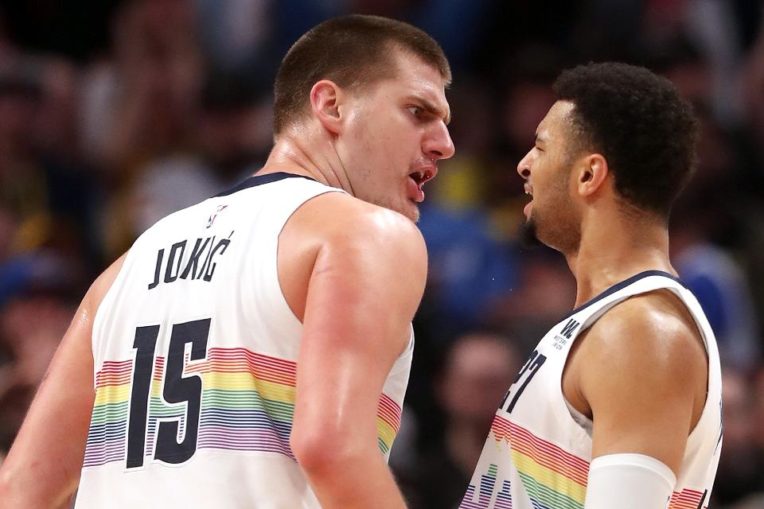