Kevin Harvick won the Brickyard 400 at Indianapolis for the third time in his career after Denny Hamlin’s right-front tire blew with only seven laps to go.

For the third time in three races, Hamlin and Harvick were running 1-2 in the closing laps, with Hamlin in control at Indianapolis. However, the Daytona 500 winner, who was trying to become only the fourth driver in history to also win the Brickyard 400 in the same year, was denied the opportunity to kiss Indy’s famous bricks after crashing from the lead with a tire-related issue with just seven laps to go.

.@DennyHamlin crashes from the lead at @IMS!

Hamlin’s bad luck allowed Harvick to win the Brickyard 400, one of NASCAR’s crown jewels, for the third time, becoming only the third driver to win back-to-back at Indianapolis in the Cup Series.

Despite leading the most laps and winning stage two, Harvick was never able to get away from Hamlin in the final segment of the race. The Toyota driver managed to take the lead after making his final stop one lap earlier than Kevin Harvick, who came out behind Hamlin after pitting. Even though the Stewart-Haas driver was able to keep up with the leader, he never got close enough to make a move, only inheriting the lead after Hamlin’s crash.

Harvick still had to survive an overtime restart, fending off Matt Kenseth to get his fourth win of the season, tying Hamlin as the driver with most wins in 2020. Kenseth, the oldest driver in the field at 48 years old, had his best race since his return to the sport, finishing second for the fourth time at Indy.

Aric Almirola had yet another strong race to finish third, earning his fifth consecutive top-five finish, in front of 2018 winner Brad Keselowski and rookie Cole Custer, who made it three Stewart-Haas cars in the top five.

Two-time Brickyard 400 winner Kyle Busch ended up sixth, ahead of Michael McDowell, who captured his second top ten of the season with another impressive run for Front Row Motorsports.

2018 and 2019 Xfinity Series champion Tyler Reddick came home eight, in front of Bubba Wallace, while polesitter Joey Logano had to settle for tenth, despite leading the first 14 laps. Stage one winner William Byron saw one of his tires come apart during stage two and finished 27th.

Byron and Hamlin were not the only drivers whose race was impacted by issues with the Goodyear tires, since Erik Jones, Ryan Newman and Alex Bowman hit the wall due to blown tires.

However, the biggest storyline before the race was the absence of Jimmie Johnson, who had tested positive for Covid-19 earlier in the week. The seven-time champion was replaced by Xfinity Series driver Justin Allgaier in the #48 Hendrick Chevrolet.

Sadly, Allgaier didn’t have a chance to prove his worth in NASCAR’s top series, since he was involved in a huge pile-up on pit road during the competition caution. Allgaier, Ryan Preece, Corey LaJoie, Martin Truex Jr, Brennan Poole and Ricky Stenhouse Jr had to retire due to the damage caused by this bizarre incident.

Rear tire changer Zach Price, one of Ryan Blaney’s crew members, was injured after being struck by the #15 of Brennan Poole and was transported to the hospital during the red flag that stopped the sixteenth race of the year for about 10 minutes.

It's a PILEUP on pit road at @IMS!

The Big Machine Hand Sanitizer 400 only got under way an hour after its scheduled start due to two lightning strikes in the area. 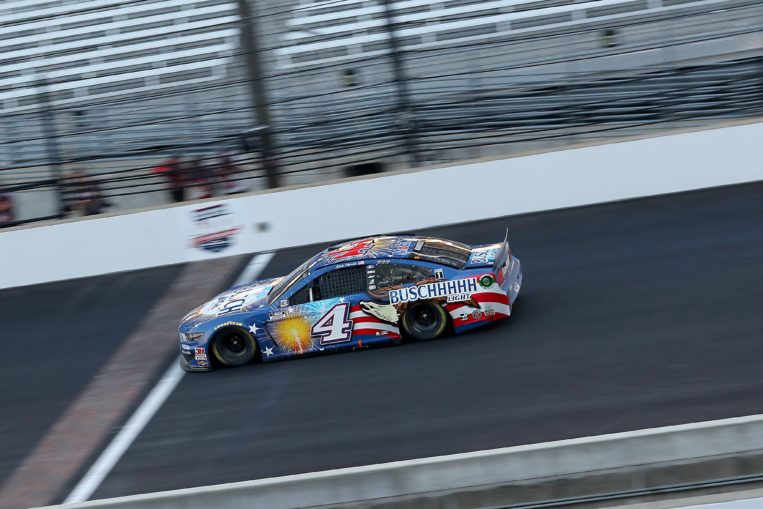