Do the Toronto Raptors have what it takes to win the 2020 NBA championship?

Most people thought that Kawhi Leonard’s departure would indicate a Raptor’s rebuild or a season stuck in mediocrity. The Raptors stunned almost everyone standing in second place in the Eastern Conference because of excellent coaching and a very well-rounded team. Toronto has managed to sustain this success and replace Leonard’s production because of Siakam’s transformation into a number one option and the improvement of several role players like Powell, Van Vleet, and Anunoby.

The Raptors winning the NBA championship without a top 10 player would be a feat accomplished by very few teams in the league’s history.

Pascal Siakam – Another year, another leap for Spicy P

Pascal took another leap this year, becoming the Raptor’s undoubted best player. He proved that he could perform as the leader of an excellent team. Siakam upped his usage and his scoring this season, which led to a drop in efficiency, but Siakam is still around league average in true-shooting percentage.

He isn’t a premier offensive threat, but he is more than respectable as a number one option, also because his teammates are very talented on the offensive side, too. He doesn’t score as most superstars do. Spicy P is very different from other players of his caliber because of his low pick and roll usage, as he mainly scores in transition and isolation and posts-up much more than other players at his position.

His biggest weakness on offense is the lack of a consistent three-point jump shot. He is hitting 36%, but most of his attempts are open looks, as defenses tend to leave him open. In the playoffs, teams are going to exploit this weakness a lot more, and it could become a problem if teams are taking the same approach against him as his team took against Giannis and the Bucks.

Now let’s speak about his defense. He’s taken a step back in this department, because of his increased role on the offensive side. He is still an excellent team defender, and can still lock-up wing with his very aggressive style of defense. In conclusion, I don’t find Siakam to be good enough to be the best player on a title team. I see him as a perfect second option on a championship team. In this role, he could be more efficient and try harder on the defensive end, making an incredible complimentary player to a superstar.

Kyle Lowry – Age is just a number, improving in season 16

Kyle Lowry defied father time this season, improving considerably on offense. Lowry has scored efficiently and abundantly, scoring 19 points per game on 59% true-shooting. He takes most of his shots behind the arc, where he has increased both his volume and his percentage. Although he is only shooting 35% from deep, it is well-known that he is a sharpshooter and can turn his three-point production up in the postseason.

Lowry is known for his elite playmaking and is seventh in assist per game this season. His assist numbers have decreased from last season because of the increased scoring responsibility and the absence of two targets like Green and Leonard.

Kyle has a stout frame that enables him to defend and box out much bigger players. He can stick with guards on the perimeter, even though he isn’t the most agile of point guards. He is a vocal leader on this end of the court, and the combination of a very high basketball IQ and a willingness to put his body on the line is the reason he leads the league in charges drawn per game.

Van Vleet has ramped up his offensive production this season, with career-highs in points, rebounds, assists, field goal attempts, and three-point attempts. He has provided consistent scoring, playmaking, and hard-nosed perimeter defense for Toronto and is going to be a key component come playoff time.

Powell has been a bright spot for the Raptors, developing significantly on both ends, but mainly on the offensive end. Like Van Vleet, Powell has posted career-highs in points, rebounds, assists, field goal attempts, and three-point attempts, but he has also been shooting the most efficiently of his career. His defense has improved tremendously from last year, posting a better defensive rating and a remarkably better defensive BPM. The question is if he can replicate his unexpected regular-season production in the playoffs.

OG Anunoby – The best isolation defender in the league

I think OG will be the third most important player on the team in the playoffs. He is the best defender on the Raptors and is one of the best, if not the best player, to put on Lebron, Kawhi or Giannis in the playoffs. He is strong enough to deal with these wings’ physicality and sufficiently fast to stay with them on their drives. Anunoby is also extremely versatile, possessing the quickness to stick with guards on the perimeter and strength to fight with centers in the post.

He has also grown on the other side of the ball, increasing his volume, his percentages, and his playmaking capacity, which is still limited but has seen improvement.

Serge Ibaka has had a season almost identical to last year. The most significant difference has been a 10% improvement in three-point percentage, which provided Toronto the opportunity to have a floor-spacing big on the floor at all times. Ibaka has seen a decrease in blocks per game, but his best defensive rating since 2015, which indicates drivers still fear his presence, he is merely not swatting away as many shots. Serge’s been especially valuable in pick and pop plays, where his deep shooting opens the paint up for teammate drives, granting the Raptors a legitimate five-out offense.

Gasol has had a good season but has seen a prominent drop in offensive production, although his efficiency has been pretty good, his points and assists per game have decreased noticeably from his last two seasons. He is still a valuable player, particularly on the defensive end, posting the best defensive rating of the Raptor’s starters, where Gasol can lock-up post-ups from opposing bigs and his team defense. On offense, despite the step back, he still gives the Raptors important floor-spacing and can deliver amazing dimes out of the high-post.

In order of minutes per game:

Will the Raptors win?

I don’t think the Toronto raptors will win back-to-back NBA titles. They have a very deep and well-balanced roster, but I find that to win a championship, it is necessary to have a top ten player in the league on your team. The Raptors’ only chance to win would be with the overperformance of all their role players, and exceptional performances by Siakam and Lowry, and I don’t see that happening realistically. 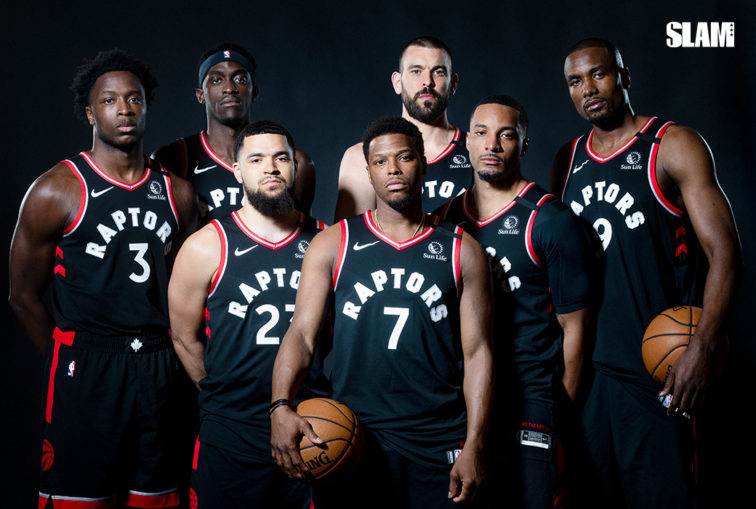