Pack your helmet on and strap yourself in.

A riveting one-day international series between England and New Zealand comes to a fitting conclusion with a decider at Chester-le-Street on Saturday that promises to be a wild ride.

This was all so unexpected. England bombed at the World Cup, and came home embarrassed. New Zealand reached the final for the first time, pulling in new fans from all over the world for their aggressive and magnanimous mindset.

After a thrilling but all-too-brief test series, England dumped the likes of Ian Bell, Gary Ballance, James Anderson, Stuart Broad, and Moeen Ali for the ODIs, ostensibly to ‘rest’ them for the Ashes. The bookies gave New Zealand odds of 7-1 to sweep the ODIs, and England 25-1.

But here we are, series square after four remarkable, often enthralling games.

England’s morphing into a side capable of going toe-to-toe with the Black Caps has stunned and captivated English fans who have been used to mediocrity for decades.

“It’s the most impressive and quickest turnaround in mindset from any England team that I have seen in my lifetime,” former captain Michael Vaughan said.

It’s been an astonishing run-fest by any standard. Only 324 more runs need to be scored for the series to top an unprecedented 3,000.

The bowlers have been slaughtered, although Trent Boult and Steven Finn have starred by conceding five an over.

The ICC is set to review the ODI rules, especially the two balls, powerplays, and fielding restrictions, to maybe swing the balance back more towards the bowlers, but in the meantime, the batting in this series has been phenomenal.

Centuries by Joe Root and Jos Buttler propel England past 400 for the first time in ODIs. Root’s 71-ball hundred makes him third on England’s all-time list of fastest ODI tons, but by the end of the game he’s fourth. Buttler’s 66-ball effort puts him at No. 2, right behind his own 61-ball lashing last year against Sri Lanka at Lord’s. Buttler (129) and Adil Rashid (69) put on a world-record, seventh-wicket stand of 177 in 17 overs as England reach 408-9. New Zealand accept the challenge, but the free-wheeling shots don’t come off, and the Black Caps lose their last seven wickets for 38 in falling for 198. England win by 210 runs.

After conceding 408, New Zealand hits back with 398-5. Ross Taylor is the linchpin with his 13th ODI century, an unbeaten 119, backed up by 50 from opener Martin Guptill and 93 by Kane Williamson. At the end, Grant Elliott and Luke Ronchi smash 30s. England is ahead of New Zealand on a comparison of overs, but keep losing wickets. Rain interrupts in the 44th over, with England needing 54 off 37 balls. The revised target is 34 runs from 13 balls, and it gets down to 24 off seven when Adil Rashid appears to hit a six over long-on, until Tim Southee leaps over the boundary to hit the ball back into play and Trent Boult makes the catch. New Zealand win by 13 runs on the Duckworth/Lewis method.

Captain Eoin Morgan’s 71 and Joe Root’s 54 have England at 288-5 with 50 balls left and believing 360 is doable. But New Zealand’s pacemen hit back strongly, bowling Ben Stokes for 68 as England lose their last five wickets for 14 runs in 22 balls, finishing with 302 and not using 4.4 overs. The total is still challenging, but Kane Williamson and Ross Taylor make light of the chase as they put on 206 in 32 overs for the third wicket. Williamson makes 118, and Taylor falls for 110 with New Zealand 13 runs from victory. New Zealand wins by three wickets.

Kane Williamson and Ross Taylor, after their 206 at Southampton, make ‘only’ 101 in 16 overs before Taylor is caught lbw. Williamson goes on to 90, and newcomer Mitchell Santner launches 44 off 19 balls, including 28 off an Adil Rashid over. New Zealand’s 349-7 looks relatively safe, but not in this series. Alex Hales and Jason Roy open for England with 100 by the 11th over, Joe Root weighs in with an unbeaten 106, but captain Eoin Morgan does in the Black Caps by blasting 113 from 82 balls, to ensure the home side romps in with six overs to spare and prevent New Zealand taking the series early. England win by seven wickets. 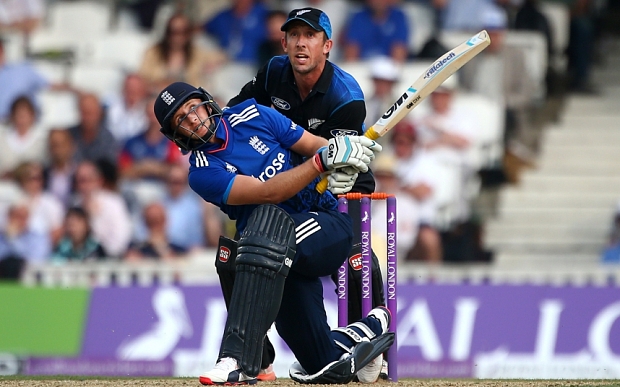