Bank Holiday Monday after the Christmas festivities saw two more games as Round 16 got underway in what was a very busy period for the sides, with only forty-eight hours in between their last games in Round 15 and these ones, so time for those squads to get a bit of use as most managers decided to make some changes, anyway this is what happened today…

Roy Hodgson made a few changes to his line up after two awful performances coming into this one, and no surprise that three of his back four were included in those changes after they had let in ten goals in their last two outings (0-7 v Liverpool and 0-3 against Villa) so he was no doubt hoping that fresh legs and fresh impetus would change his side’s fortunes.

Brenden Rodgers himself had surprised a few though by making seven changes from the side that had drew 2-2 with Man United last time out, including the benching of Jamie Vardy and leaving James Maddison out completely, although both were carrying knocks, and it gave others a chance to prove themselves in this one, including Iheanacho, who was in for Vardy up top.

The Foxes dominated possession early on, with 76% of the ball in the opening fifteen minutes or so, and then they had the chance to turn this possession into a goal when Tompkins took out Thomas after the latter had run into the box, but Iheanacho stepped up and saw his rather poor 17th-minute spot-kick well saved by Palace keeper Guaita, and the hosts remained level with their opponents.

The Foxes continued to have the better of the game and saw a Perez cross hit Mitchell and loop up and onto the top of the bar before Praet could only fire the rebound over the Palace goal, and then Iheanacho send a point blank header over after he headed onto his own shoulder, he should have scored and some would argue had Vardy been on the pitch, Leicester would have been two up most likely.

Palace’s best and probably only real chance saw a cross from Schlupp volleyed wide by Townsend at the near post, it was a great chance and one the latter should have done much better with; however, this was a rare moment of positive play from the hosts in an opening half which Leicester bossed for the majority, but they had nothing to show for it and the sides went into the break all square.

Crystal Palace knew they had to try and be much more positive after the break and they were certainly that and had the better of the opening few minutes of the second period, and just before the hour mark they grabbed the lead after Zaha had burst through the middle and played a lovely ball out to Townsend, he burst into the box and volleyed home Townsend’s lovely ball to the back post past Schmeichel at his near post, and the hosts now had a lead to try and hold onto.

Rodgers responded by bringing on Vardy to try and get some fresh impetus into the Leicester side, they had not hit their high standards of the first period and were struggling in this one as Crystal Palace were certainly playing with much more purpose in the second forty-five.

But, with eight minutes to go and from nowhere Leicester found a leveller and it was from Barnes who cut inside and fired a left-footed effort past Guaita with three defenders around him, it took the hosts by surprise and suddenly they were now holding on for a point.

The did manage to get a point in the end though as Leicester could not find a winner, although they may have felt unhappy and letting the lead slip as it would have been a big win for the hosts, The Foxes will also feel a point is the least they deserved after dominating the opening half.  Barnes was superb for the visitors today and deservedly got the MOTM award.

Lampard made six changes to his starting eleven following their awful defeat at The Emirates last time out, one which included the return of Giroud to the starting line-up, the strikers record against Villa was pretty good, with nine goals in nine games against them, whilst Smith had made just the one change to his Villa side who saw off Palace last time out, Mings being replaced as the centre half was suspended following his sending off in that game.

It was the first game Mings had missed all season, so how would this affect the visitors?

Well, it was a tight opening twenty minutes at Stamford Bridge, Villa started the better and saw Grealish force Mendy into a diving stop early on, but then the Villa playmaker almost gifted the Blues a goal when his cross-field pass was intercepted by Pulisic who drove into the box but could only find the side netting with his attempt.

Chelsea then had a great chance when a loose ball inside the six-yard box was somehow hooked over from point blank range by Pulisic, however, eleven minutes before the break he was involved in the opening goal, as he laid in Chilwell down the left whose cross found Giroud who sent a diving header past Martinez for his tenth goal in ten appearances against The Villa, and Lampard and Co had an important lead.

The hosts were good value for their lead after a slow start initially, and although Villa had created some openings, none were really guilt edged ones, so they knew they had to improve on that in the second period to get something from this game.

They did just that and how at the start of the second period, levelling the contest up five minutes after the break when a decent cross from Cash found El Ghazi all alone at the back post to volley through the legs of Mendy and into the net, and Chelsea’s lead was wiped out just like that.

Both teams then went on to try and win the game, Chelsea did have the ball in the net after Azpilicueta had turned from inside the six-yard box, however, in the build up to that Pulisic was offside when his initial header had been cleared off the line before in was recycled for the defender to turn home.

Villa then went oh so close to finding the lead when McGinn, who had been everywhere for the visitors, thumped a brilliant long-range effort crashing against the bar with Mendy nowhere near it, and then Martinez produced a smart save to deny Hudson-Odoi, who was probably the hosts best player in this one, from outside the box.  The game was certainly opening up as we approached the final twenty.

Ramsay then came on for Villa and almost bent an effort into the far corner with his first touch seconds later, would have been some introduction that, and then Werner, on for Giroud, could only fire over a decent opening at the other end.

And deep into stoppage time Chelsea almost snatched all three points but saw Chilwell’s wonderful cutting volley go inches wide of the far post, it would have been a wonderful winner, but it wasn’t to be, and the game ended up all square and a point a piece for both sides.  It was also the first point Villa had picked up this season from a loosing position, so something for them to be positive about no doubt.

For Lampard and Chelsea, yes it was not the win they were after, but it was an improved performance from the one against Arsenal so positives to take into the City game on January 3rd, if that goes ahead of course, which I will now explain below.

There was supposed to be a third game today as Manchester City were supposed to be travelling to Merseyside to take on Everton at Goodison, but an outbreak of Covid-19 amongst the City camp meant the game was called off around 4pm today after positive tests were returned.  A big shame but the safety of the players and all concerned must be paramount, and I wish the visitors all the best in this worrying situation.

That meant no more games for Monday, so here is how the table looked after the two games that took place today… 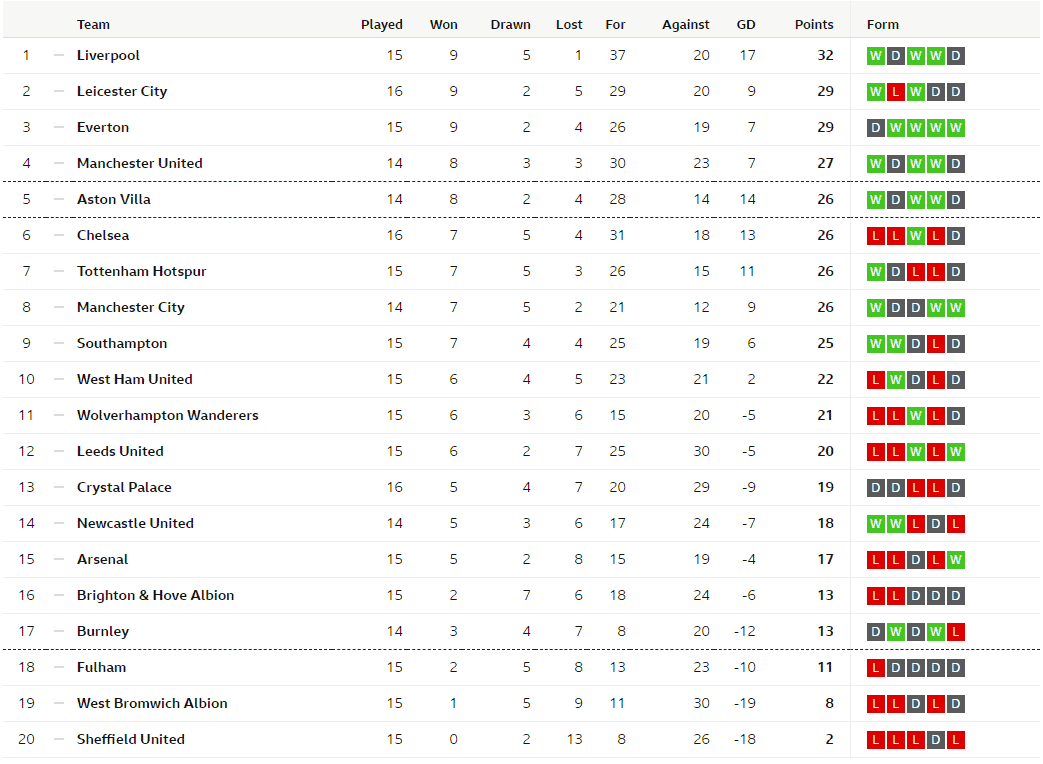 Leicester’s point does take them second on goal difference above Everton who slips to third, whilst Palace go up a place to 13th and eight points above the drop zone, although they are only eight points of the top four too, such is the craziness of the league this season.  Villa and Chelsea both rise to fifth and sixth respectively after their point at The Bridge, with Villa only a win behind second-placed Leicester and third-placed Everton with games in hand on them, what a season they are having thus far.

Five more games are scheduled to take place tomorrow, here are those…

All 6pm unless stated

Can Arsenal build on that terrific boxing day win over Chelsea? Can Sheffield United grab their first win?

Could The Saints end the night in the top four?

Can Big Sam and West Brom build on that superb point at Anfield?

And could Man United end the night in second?  All questions to be answered tomorrow evening, stay tuned… 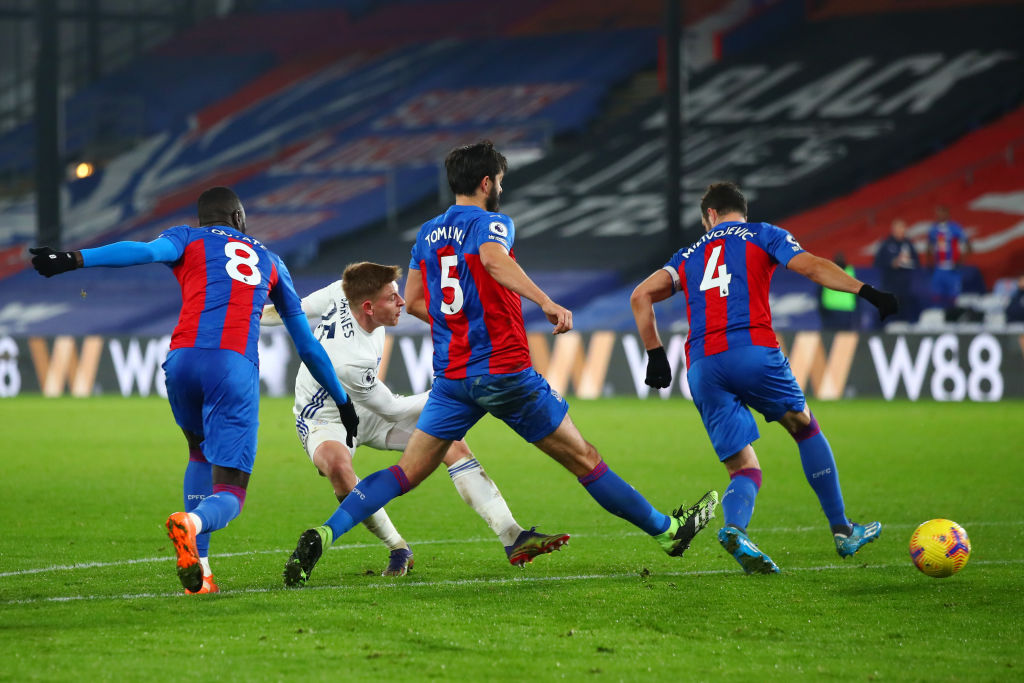