Pakistan cricket team ouster from the quarterfinals against Australia was quite understandable given their dismal display of batting over a period of four years.Misbah-ul-Haq, one of the unsung heroes had to galvanize this team from the scratch after all the farce created due to spot fixing scandal.

He led Pakistan in a tremendous fashion in situation where no one could have achieved what he did during his time as captain. The Asia Cup tournament in the previous year did vindicate the green shirts about possible Achilles heel brewing under the curtains.

Throughout the tournament there were areas of concern for the team in view of global trophy  held in Australia.

Sometimes Defeat is more illuminating than victory as it allows you to retrospect areas of concern for future endeavors. Similarly, there needs to a more pro-active approach rather than reactive one.First, Shahid Afridi did not perform well as an all-rounder since reaching meteoric heights in the previous World Cup. Perhaps, the signs were evident since he did set the world alight in these previous years.

The worry now is the lack of all-rounder who can fill the role which was previously played by Abdul Razzaq and Shahid Afridi.The sign of weakness in the World Cup for Pakistan team was over-reliance on key players like Misbah and bowling quartet to deliver the unthinkable every game.

The exclusion of players like Muhammad Hafeez, Saeed Ajmal, Junaid Khan and Umar Gul left team selectors in a quagmire as there was no back up for these players . The problems showed one thing there should be rotation policy  in terms of managing workload for the bowlers since no one can play all the formats throughout year due to increasing rigors of the modern game.

Moin Khan and team management must try to circumvent these problems since the defeat in the tournament was a blessing in disguise for the Mercurial Green Shirts.

The World Cup can serve as lessons for Pakistan to use pro-active approach quite similar to what India in 2007.The consistent process of selection ensured that promising players like Rohit Sharma, Dhawan and Raina have made their mark due to constant support by M.S.Dhoni and Indian Selectors.

Constant tinkering with the team results in inconsistency and leads to lack of clarity. I think the event has given Pakistan selectors an eye opener to take measures that will hold Pakistan cricket in a better position for the future events. 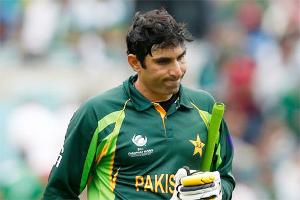