It was confirmed today that it was the end of a great NFL career, Denver Broncos’ Peyton Manning held a press conference earlier to announce his retirement from playing and that he is bowing out with no regrets after playing 18 seasons in the NFL.

The Denver Broncos quarterback won his second Super Bowl just a month ago, he is retiring as a NFL record breaker.

With is children and teammates by his side at the press conference the man who wore the number 18 jersey, brought his eighteen year career to an end whilst at the top.

He is the only player to start at quarterback in the Super Bowl more than once for two different teams and the only starting quarterback to claim a title with different franchises.

Peyton Manning was the Indianapolis Colts first pick of the 1998 draft, he went on to play for 14 seasons between 1998 and 2011, taking them to the Super Bowl on two occasions.

During his career, Manning has broken just about every NFL record, throwing more touchdowns, completing more passing yards and winning more games than anyone else in NFL history. He was voted to the Pro Bowl a record fourteen times and a five-time league MVP.

His on-field rivalry with New England’s Tom Brady was intense, but also one he relished.

“I’ll even miss the Patriot fans in Foxboro,” “And they should miss me, because they sure did get a lot of wins off of me.”

“Peyton was everything that we thought he was and even more, not only for the football team but in the community.”I’m very thankful Peyton chose to play for the Denver Broncos, and I congratulate him on his Hall of Fame career.”

Denver head coach Gary Kubiak added: “After competing against Peyton many, many times, I already had great respect for him.

“But being with him this season, going through what we went through and accomplishing what we accomplished, that was special.

“It was a blessing to coach Peyton Manning. Nobody worked harder at the game and nobody prepared harder.”

“Congratulations Peyton, on an incredible career. You changed the game forever and made everyone around you better. It’s been an honour.”

Peyton Manning was revered by opponents, loved and respected by his teammates, Manning will be remebered as one of the greatest players to have ever played the game. 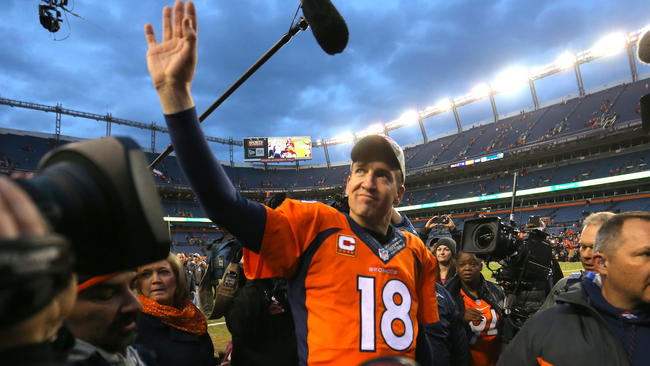