On Thursday, England showcased the unconventional, matching scintillating strokeplay with courageous conviction in a record-breaking onslaught that had everyone enthralled, questioning the landscape of Test Cricket. Today, England showcased the traditional but no less salient virtues that make up the foundation of any good Test side; perseverance, grit, dogged determination, and enormous heart. England showed indomitable spirit on a day that would have provided coach Brendan McCullum with just as much satisfaction as Thursday’s fireworks. Pakistan finished the day 499-7, still 158 runs in arrears, giving England a sniff of victory, no less than their lion-hearted efforts deserved.

England began the day wicketless, on a lifeless pitch and facing another day of back-breaking work, trying to prise out the Pakistan openers. Imam ul-Haq and Abdullah Shafique quickly ensured their hard work yesterday didn’t go to waste, reaching deserved hundreds and marking the first occasion in Test history where each opener on both sides has made a hundred in the first innings.

Will Jacks finally made the breakthrough, Shafique cutting a short, wide delivery into the hands of his Surrey compatriot Ollie Pope for a splendid 114. Imam was next to go, holing out to Ollie Robinson at long-on for 121 off the bowling of Jack Leach. England’s joy at removing the openers was tempered by the fact it brought Pakistan’s inspirational captain, Babar Azam, to the crease. Babar was quickly into his stride, but Jack Leach removed Azhar Ali, LBW, for 27, and with Pakistan 290-3, England’s bowlers had their tails up.

Babar quickly quelled any optimism, playing with characteristic flair and power, mixing the traditional with the innovative. He was ably supported by the more circumspect Saud Shakeel, who was more than content to play second fiddle as the pair made England’s bowlers toil, adding 123 for the fourth wicket before Ollie Robinson had Shakeel caught behind in the first over after tea, needlessly fiddling at one outside off-stump. Babar had effortlessly moved to his eighth test century just before tea, swatting Ben Stokes away for four and sending the crowd into raptures.

Shakeel’s departure heralded the arrival of wicket-keeper batter Mohammad Rizwan as England entered a crucial passage of play against Pakistan’s most destructive pairing. England’s bowlers didn’t shirk the challenge, showing a cussed determination and spirit that belied their tired legs. Stokes must take enormous credit, showing great innovation in his field placings; fielders regularly clustered around the bat, bowlers encouraged to take wickets- the shipping of runs a necessary evil.

He was handsomely rewarded in the space of two overs which may prove pivotal to England’s chances of winning the match. Will Jacks induced a rare mistake from Babar, who slashed one straight to Jack Leach at point, departing for a magnificent 136. It got better; in the next over, the wily Anderson ensnared Rizwan in his trap; coming round the wicket, he had the Pakistani batsman tamely chip one to England’s captain at mid-wicket, leaving Pakistan 475-6 and England firmly in the ascendancy. It was Anderson’s first-ever Test wicket on Pakistan soil and a wicket that typified England’s innovative approach and commitment to taking wickets. Jacks, who bowled well all day, gamely plugging away outside off-stump, had his third wicket shortly before the close of play, Naseem Shah skying one to Leach with an ill-advised stroke.

I said yesterday that today would be Stokes’s biggest challenge as a captain. He responded superbly, setting aggressive fields designed to manufacture wickets while cleverly rotating his bowlers- who must also take massive credit for their relentless tenacity. England’s pyrotechnics on Thursday may have been more eye-catching, but their cricket today was equally as effective, showing the skill and perseverance critical to finding success in the sub-continent. England still has a lot of hard work to do if they were to achieve a memorable victory, but there is no doubt that modern England’s commitment to winning is absolute, and in Stokes, they have a captain who loves to defy the improbable. 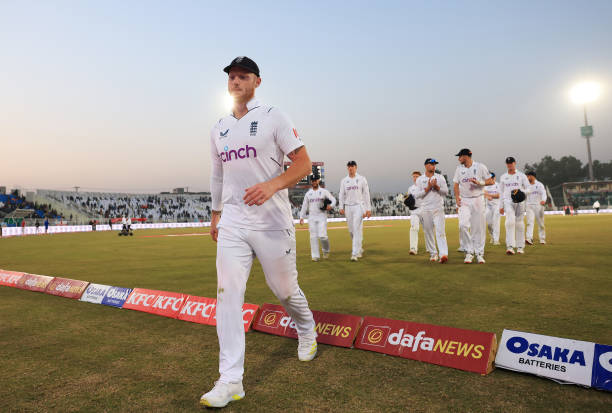