Novak Djokovic and Andy Murray will face off for the 27th time in their careers on Sundays’s Miami open final.

Both players are looking in top form as they dismissed their semi-final opponents in straight sets.

The first set was tight with both players comfortably holding their serves. Isner allowed Djokovic only one break point, which was also a set point point, but managed to pull through and take the set to a tie break. The Serb displayed more nerves and held off Isner’s big serves to take the tiebreak 7-3

It was a completely different story in the second set however as the world no. 1  dismantled the American, breaking him two times to complete his victory.

Djokovic faced no break points throughout the 90-minute match and fired more aces than the big serving Isner.

“I thought he played pretty well,” said Isner. “I certainly needed to play better in order to beat him, and I didn’t do it. He was too good.”

“I’m glad that I managed to realise everything that I intended tactically before the match,” said Djokovic. “It’s always tough to play somebody that serves that well.

“At the end of the day, it is important to hang in there mentally, be patient… I used the court very well, and I’m pleased with the performance.”

In the other semi-final world no. 3 Andy Murray cruised past Tomas Berdych effectively utilising his defensive skills.

Both sets were much alike with Berdych trying to break through Murray’s defense with powerful serves and forehands.

But the Scot was very consistent from the back of the court, neutralising all shots and inducing errors into his opponents game and went on to clinch the match with a comfortable 6-4 6-4 win.

“I felt like I served well,” said Murray. “It was tricky from one end of the court. We’re basically serving right into the sun at that time of day, so I had to take a little bit off the serve. On the second serve it was very tough to see.

“But I thought when I was behind in games, like the last game, for example, I came up with some big serves and was able to dictate a lot of the rallies from the baseline as well. I was moving him around a lot. That was good.”

Djokovic leads Murray in FedEx ATP Head2Head series  17-8, and he has won their last meeting in straight sets in the Indian Wells semi-final 2 weeks ago. The pair also met in the final of this year’s Australian open, which Djokovic won in four sets.

The Serb is looking to win his 5th title in Miami and also become the first player to complete the Indian Wells-Miami title sweep on three separate occasions.

Murray, who claimed his 500th career win en route to the final, defeating Kevin Anderson in the fourth round, will be chasing his 32nd singles title and his 3rd title here in Miami.

Who do you think will have an edge on Sunday’s final? 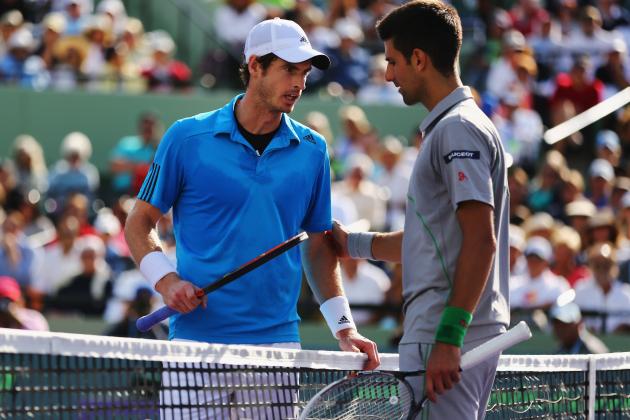