Emma Raducanu beats Leylah Fernandez 6-4, 6-3 in US Open Final to become the first British woman in 44 years to win a Grand-Slam Title.

After a sad end to a memorable first year at Wimbledon, the 18-year old Brit stunned the world of tennis by winning her first Grand Slam Title at the Iconic Flushing Meadows, New York.

Raducanu, who reached the fourth round on her Wimbledon debut, entered the main draw at the US Open through qualifying.

She also went through the whole tournament without dropping a set.

Last night’s final started with both women going at each other with an array of powerful groundstrokes. It was a 23-minute battle as the two finalists were desperately trying to earn the first break of the final.

Throughout her run, in this year’s US Open, holding serve had not been straightforward for the Brit as she had to fend off several breakpoints off her serve. It was the same story against the feisty young Canadian, who had shown great resilience and character to fight back from any situation during her run at this year’s US Open.

The Brit got the first break of the game at 2-0, but Fernandez was not going to lie down so soon and got the break back.

The score was 6-4′ when Raducanu got her second and the most crucial break of the game as she wrapped up the first set in just over an hour.

ALSO READ:  Is Medvedev Ready To Take On The Mantle From Djokovic?
Embed from Getty Images

The second set started in a similar fashion, with both women fighting to keep hold of their serve. Fernandez then broke in the third game to make it 1-2.

But the Canadian could not hold her serve as even though she was got herself to ’30-30 from 0-30, a couple of crunching backhands from Raducanu brought it back to 2-2.

The Brit managed to keep her nerve when serving out the fifth game, she was down 0-15 and level at 30-30′, but her resilience paid off in the end to make it 3-2.

She finally got the crucial break at 4-2 with a breath-taking forehand winner down the line. The shot that she executed even stunned Martina Navratilova in the commentary box.

Leylah saved three championship points on her serve at 5-2 and therefore asked Emma to serve it out at 5-3.

She vented out her frustration in the first point of the ninth game, with a crunching forehand down the line. This was followed by a wayward forehand crosscourt to make it 15-15. Raducanu then hit another forehand down the line making it 30-15, before Fernandez’s backhand passing shot forced the Brit into a forehand error into the net.

Fernandez then started to dictate play at 30-30 as a great return allowed her to dominate play. Raducanu was now in a spot of bother facing a breakpoint whilst serving for the match.

The Brit also injured sliding through the court on one knee and grazing it. This forced her to have medical time out and the Canadian was left displeased with the scenario, as it was at the most crucial point of the game.

Fernandez missed the chance to break back with an over-hit forehand, which went long. Raducanu had a chance to win it but also saw her forehand down the line go long.

She then saved a breakpoint, with a brilliantly controlled forehand smash, before a 1-2 punch on the backhand, gave her a third championship point.

She claimed it in style, with an ace down the forehand side. It was a stunning end to a magnificent first US Open from the 18-year old.

With this victory, Raducannu also moves up from 150 to 23 in the WTA rankings. She also becomes:

The 18-year-old reflected on her victory with great relief.

“I’ve always dreamed of winning a Grand Slam. You just say these things. But to have the belief I did, and actually winning, I can’t believe it,” she said.

“I first started when I was a little girl, but I think the biggest thing that you have visions of is the winning moment, and going to celebrate with your team, trying to find your way up to the box.

“That’s been playing in my head, like, a couple of nights. I’ve fallen asleep to that.”

What’s Next For Emma?

Along with the trophy, the British number one now gets prize money of £1.8 million. This can be life-changing for her as she can then hire a new coach if need be.

According to Tim Lopez (CSM director of local talent business), Raducanu is  “going to be a multi-millionaire” and she has already made “just shy of a million pounds on the back of her on-court earnings”.

“From a financial perspective she can’t lose and from a career prospect, in terms of how the future looks, she really is at the tip of the iceberg at this point in terms of her earning potential.”

If she makes it in the top eight by November, she will be in the WTA Finals in Shenzhen, China. If she remains inside the top 100, she will automatically qualify for the Australian Open in January.

It may only be her first year on Tour, but Emma Raducanu has certainly made a name for herself on tennis’s biggest stage. 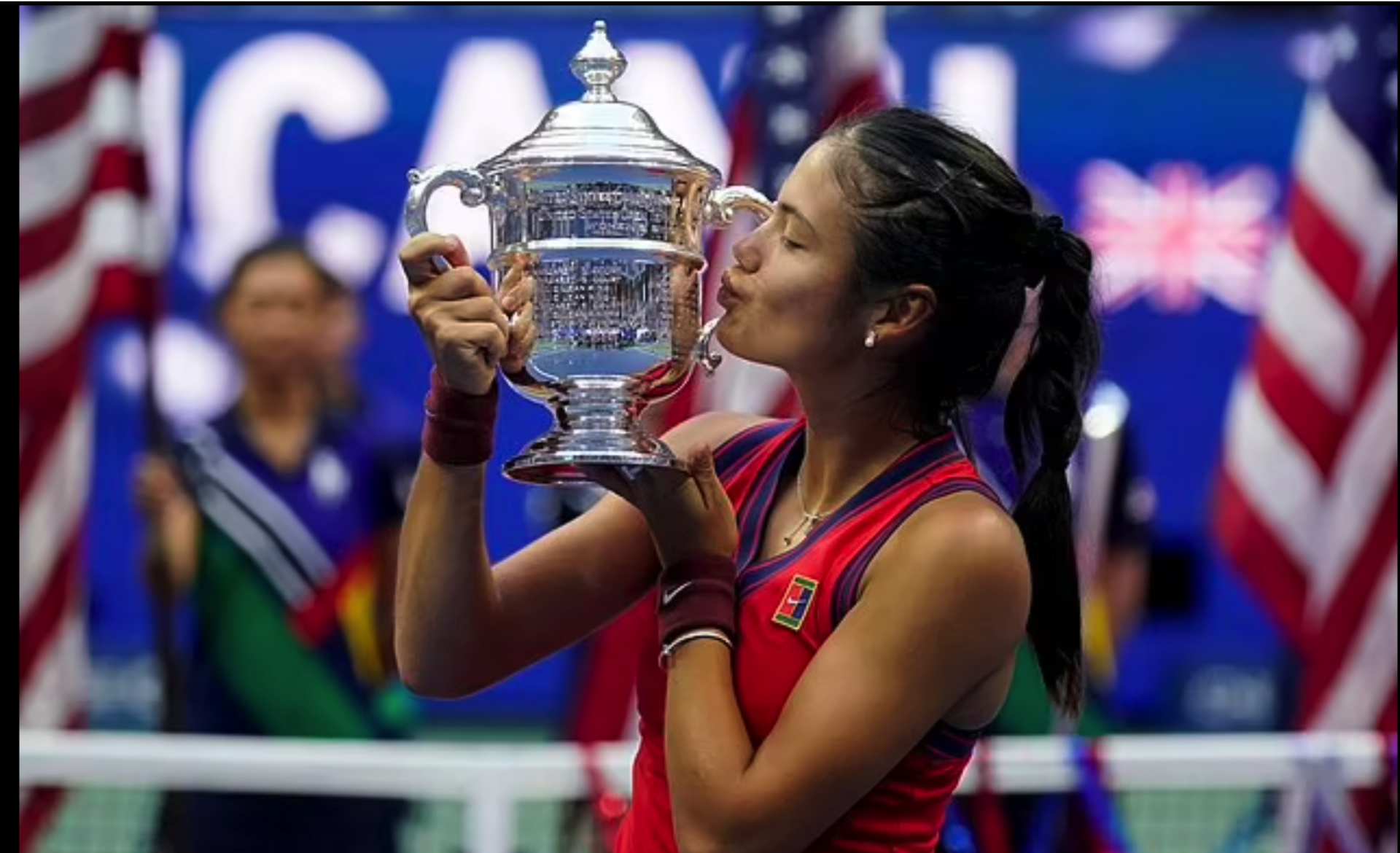